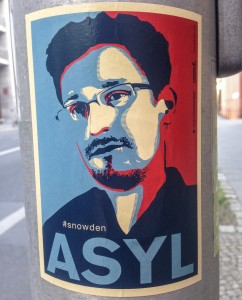 There can hardly be a more interesting place to follow the saga of Edward Snowden than Berlin. Germany is still bristling with anger over documents detailing the National Security Agency’s far-reaching surveillance programs and, in particular, its close monitoring of the German chancellor’s personal cell phone. Nowhere is this this anger more palpable than in Berlin; Snowden’s face is plastered on street lamps, subway entrances, and billboards around the city as part of a widespread call by the German people to their government to grant Snowden asylum. Chancellor Merkel’s administration, however, has been unwilling to do so—a decision that has been accompanied by an easing of tensions with the U.S. government in order to present a more united front in the midst of the Ukraine crisis. Many Germans are furious over this development, accusing Merkel of being too quick to forgive Obama for violating her trust. Meanwhile, they continue to laud Snowden as a hero.

On Wednesday night, I watched an hour-long feature titled “The Plot Against Freedom: Big Brother in the White House” on ZDF, one of Germany’s independent non-profit TV networks. Several hours later, in the U.S., NBC would broadcast an hour-long interview with Snowden himself, filmed in Russia and conducted by Brian Williams. Unable to watch the interview at the time it aired, I streamed it the next day in a crowded Berliner coffee shop.

In stark contrast to the dramatic music and rapid onslaught of images in the ZDF documentary, Snowden (or “Ed,” as he introduced himself) responded to Williams’s straightforward questions with a level, crisp voice, in a highly articulate manner. Though Williams threw no curveballs, Snowden delivered a number of surprising details regarding his work for the U.S. government, specific objections he raised as a federal employee, and the difficulties he encountered upon fleeing the country. Among these, Snowden revealed that he trained as a spy for the CIA and was told to “stop asking questions” when he tried to voice concerns about NSA programs early on. During the interview, he also expressed his wish to return to the United States, though he made it clear that he remains unwilling to “walk into a jail cell.”

This new information is far from groundbreaking, but it has undoubtably reignited the debate surrounding Snowden and the classified NSA documents that were exposed a year ago. Perhaps this is exactly what Snowden intended—to further draw out the worldwide conversation about government surveillance and data privacy that he believes is necessary for the protection of our civil liberties. Indeed, over the course of the past year, he has released classified documents in spurts, so that each time the public loses interest in the matter, it will be reawakened. The public’s attention span is short, and Snowden intends to combat that.

In the coffee shop, nearly everyone is sitting at a laptop, phone in hand. From outside, Snowden’s face wearily observes us from the pole of a traffic light, as if to say, “Big Brother is watching.”

Anna-Sophie Harling is an Associate Editor for The Politic from Long Island City, New York. Contact her at anna-sophie.harling@yale.edu. View more posts