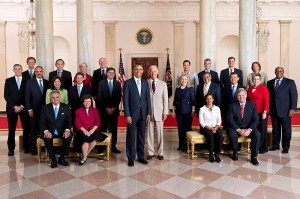 When you imagine yourself working for the President of the United States (and let’s be real, you definitely have, like everyone else who reads the Politic), you envision a life of glamor. There would be long rides on Air Force One, casual strolls through the White House, an ever-present coterie of handsome Secret Service Agents, and most importantly, a direct line of communication to POTUS himself. You would work with the President and his staffers to enact change, to make a difference, or best of all, to change the world.

As Politico Magazine reported yesterday, however, life has not been so glamorous for members of the Obama cabinet over the past five years. The consolidation of power by members of the west wing staff has marginalized cabinet officials, with the exception of the rock stars like Hillary Clinton, Robert Gates, and Eric Holder. Those whose names were surrounded by less fanfare – Steven Chu, Hilda Solis, Gary Locke, and their colleagues – were worn down by a sense of alienation, leading to a steady stream of departures.

1) Jim Messina plays no games. During a 2009 trip to Trinidad and Tobago, Steven Chu, the Nobel Prize winning former Secretary of Energy, went off script during a press conference by asserting that climate change will eventually leave the island nation underwater. He effectively told the truth. But that was not exactly the positive message that the White House had been looking to convey. Aboard Air Force One, Chu was dressed down by Jim Messina, who was Deputy Chief of Staff at the time and would later run the 2012 Obama campaign. “What did you say?” Messina demanded, according to a witness. “What were you thinking?” he yelled. “And how, exactly, was this fucking on message?”

2) Nobody puts baby in the corner – especially when baby is Attorney General Eric Holder. In response to White House Senior Staffers’ plan to more tightly monitor his public statements, Holder went straight to President Obama to complain bluntly stating that “he didn’t intend to be treated like a child.” The plan was rescinded.

3) Haven’t heard of Gary Locke, former Secretary of Commerce? Well, you’re not the only one! Locke “did little to impress Obama or his team, and was eventually shipped off to Beijing as ambassador to China.” Thereafter, “He was never heard from again.” Wikipedia reports that Ambassador Locke is still in China, but perhaps the White House should send someone to check up on him.

4) Hillary Clinton, like most Americans, is totally over the Sunday shows – Meet the Press, Face the Nation, This Week, et cetera. “She hates them. She would rather die than do them,” an aide told Politico. “The White House knows, so they would know not to even ask her.” Secretary Clinton must know that brunch is a much more rewarding Sunday morning choice.

5) Obamacare Problems? Blame the West Wing, not HHS. Top Obama political advisors took a “do-no-harm election-year strategy of minimizing controversial regulatory action” for 2012. In effect, much of the necessary rule making in support of the Affordable Care Act was left until after the election, causing a domino effect of delays. The ripple effect from this choice is being felt in the White House and across the country.