A Uyghur woman confronts a riot policeman in 2009.

Urumqi, the capital of China’s Xinjiang Uyghur Autonomous Region, is a poster city for Chinese economic growth in the 21st century. An ever-expanding sprawl of apartment buildings punctuated by modern skyscrapers, it is the bustling commercial center of the country’s northwest. But prosperity, regardless of the gleaming glass towers and pervasive wealth, does not define Urumqi. Its location near the geographical center of Asia, thousands of kilometers from China’s heartland, gives it a uniquely diverse ethnic identity—one that is often violently at odds with Beijing’s one-size-fits-all, Han-dominated policies. 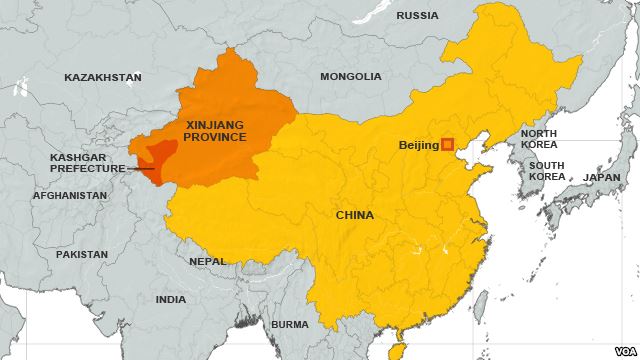 Even though Urumqi is overwhelmingly Han Chinese, about thirteen percent of its population is Uyghur, a Muslim ethnic minority with both European and Asian roots. In fact, Uyghurs outnumber the Han in Xinjiang as a whole, accounting for almost half of its twenty-two million people. Nowadays, any mention of Xinjiang’s unique composition conjures images of ethnic tension and violence. Uyghurs face intense discrimination from the Chinese government, which looks unfavorably upon their cultural and religious practices. In recent years, Urumqi has seen violent attacks by frustrated Uyghur individuals and brutal retaliation from police forces: in July 2009, protests in the city escalated into riots as Uyghurs attacked the Han and clashed with the People’s Armed Police. Hundreds were killed, thousands injured. In the months following the incident, thousands more were arrested, including many high-profile Uyghurs. But the violence, not at all representative of the greater Uyghur cause, is only one facet of a very complicated conflict. Uyghurs see restrictions enacted by the Chinese government in the name of national security and counter-terrorism as an assault on their culture, an unwelcome assimilationist agenda. According to Alim Seytoff, President of the Uyghur American Association, “The Chinese government’s intent is to systematically and gradually eliminate the Uyghur people.”

In some form or other, confrontations between local and outsider ethnic groups have shaped Xinjiang for millennia. Small kingdoms and alliances of nomadic people controlled the region until 60 B.C., when the Han Dynasty established its first military presence there. Many centuries later, Islam bloomed in the area during the decline of the Tang Dynasty. Before the upheavals of the 20th century, Chinese control over Xinjiang generally waxed and waned along with dynastic cycles. But following the Revolution of 1911-12, the Beijing government appointed Han commander Yang Zengxin governor of the region, and he presided over bitter ethnic and political disputes. After the 1949 Communist victory, Beijing adopted more moderate policies towards Xinjiang and declared it an Autonomous Region in 1955. Nevertheless, Xinjiang felt the brunt of the Great Leap Forward and the Cultural Revolution, as well as a boost from stupendous economic growth beginning in the late 20th century. Despite the boom, ethnic tensions have only intensified as the influx of Han Chinese has heightened economic and social inequities between the two groups.

Dru Gladney, a professor of Anthropology at Pomona College, says that while “the Uyghur economic situation has definitely improved, it has certainly not improved dramatically enough to close the gap with the Han.” Uyghurs grapple with continued job discrimination and political imbalance. Professor Timothy Grose of the Rose-Hulman Institute of Technology explains, “The greatest levels of income inequality are in the private sector, with Han employees making significantly more annually than Uyghurs. Although Han and Uyghur earnings in the state sector are comparable, it should be noted that Uyghurs are underrepresented in certain state-controlled sectors and in high-level government offices.” That income inequality results from (and reinforces) a general disdain of the Han toward Uyghurs that repels the two groups into different neighborhoods and even different parts of the province: Southern Xinjiang is overwhelmingly Uyghur, Northern Xinjiang mostly Han.

Religion is the greatest point of contention. On January 5, the Standing Committee of the Urumqi People’s Congress prohibited people in Urumqi from wearing clothing “that masks the face or robes the body.” Grose notes the implications of this legislation: “The penalties for veiling are severe…if the ban is strictly enforced for a long period of time, it will likely only deepen Uyghur resentment against the Chinese Communist Party.” He also emphasizes that there is room for ambiguity. “Keep in mind, “ he said, “Many Uyghurs consider some styles of Islamic veils as alien to Uyghur culture, and some Uyghur women refuse to cover their heads altogether. We can’t overlook the debate over veiling that is occurring in Uyghur communities.”

But even though the ban will seem more unreasonable to some Uyghurs than to others, it’s clear that its motives are misguided: the Han-dominated Xinjiang government has mistakenly equated certain Uyghur modes of dress with radical Islam. Greg Fay, Project Director of the Uyghur Human Rights Project, explains that “This veiling restriction…references religious extremism, but anybody you ask will tell you that veiling is not an extremist practice—it’s a practice of religious faith. Women have different reasons for veiling, but religious extremism isn’t one of them.” In fact, religious extremism rarely motivates Uyghurs, whose sentiments are primarily directed toward self-determination. Gladney stresses that jihad is not part of the picture: “Uyghurs are more concerned about liberating their homeland, less so about Islamic Jihad…Even the most radicalized Uyghurs are still very nationalist, very concerned about their people rather than making jihad.”

Not surprisingly, the Chinese government has constructed a one-sided account of the ethnic unrest, exaggerating Uyghur extremism and minimizing its own abuses. Seytoff passionately denounces Beijing’s narrative: “The Chinese government’s media and propaganda machine has for decades brainwashed the Chinese people to believe that Uyghurs are the enemy, Uyghurs are the threat, Uyghurs are going to kill ordinary Chinese people.” He also accuses the government of exaggerating the extent of Uyghur violence, and even claims that the Chinese state is the “root of all evil in China.” This is a strong statement, but Seytoff makes a case for it. The state is not only arresting, imprisoning, and even executing Uyghurs for expressing their beliefs. It’s also trying to “assimilate the Uyghur people and leave them simply Han-Chinese speaking Uyghurs…who do not speak their own language, who do not learn their own religion, who do not know their own history, who think they’re Chinese.” To be sure, this goal has not been achieved and is unlikely to be realized: according to James Millward, a professor of Intersocietal History at Georgetown University, recent restrictions have made Uyghurs “increasingly conscious of their Uyghurness, more and more in distinction to their Chineseness.” But one has to wonder: if the Chinese state continues these restrictive policies for many more decades, how much will Uyghur culture erode?

An uplifting testament to the strength of the Uyghur consciousness can be found in Grose’s personal interactions with graduates of the ‘Xinjiang Class’ program. Founded by the Chinese Communist Party (CCP) in 2000, the Xinjiang Class recruits talented Uyghur students to predominantly Han boarding schools outside of Xinjiang. The aim is to train young Uyghurs in Party ideals and shape them into compliant members of the Chinese Nation (Zhonghua minzu). This opportunity is a mixed blessing. On one hand, says Grose, “The Xinjiang Class offers a world-class education that is otherwise unavailable to them. Furthermore, the Xinjiang Class is a ticket to a Chinese university—90% of all Xinjiang Class graduates attend either a four-year university or technical school in inner China.” On the other, the privilege comes with a cultural price: the schools strictly prohibit Uyghur religious practices. State ideology reigns in the classroom; the curriculum leaves plenty of room for patriotism but little for Uyghur ethno-national identity. In response, “Students resisted these policies by praying in private and by speaking Uyghur in their dormitories,” Grose says. He found in his study that, contrary to the mission of the program, graduates of the Xinjiang Class retain and even strengthen their connection to Uyghur culture and religion. Their rigorous education has allowed them to be mindful of ideologies both essential to and inconsistent with the Zhonghua minzu.

But these are improvements generally limited to talented individuals, and they do not transfer into meaningful political action. Foreign activists and scholars say this decisively: there are no organized and vocal Uyghur interest groups within Xinjiang. The Uyghur American Association’s mission is to promote the human rights and self-determination of Uyghurs from outside of Xinjiang, but there are no organizations in the region with which they can maintain correspondence. “The Chinese government’s repression is all-dimensional,” Seytoff explains. Furthermore, questioning the status quo in Xinjiang is largely off-limits to Chinese politicians. Academia may hold a slightly more promising potential to induce reforms, but as in any other sphere, vocal opposition has severe consequences. In September of 2014, China handed down a life sentence to Ilham Tohti, a Uyghur economist at Central Nationalities University who created a website called Uyghur Online for discussing Xinjiang’s ethnic problems. Fay calls Tohti’s imprisonment “a major blow to the Uyghur human rights movement in China.” It seems that real, lasting progress can be found only through major reforms in the Chinese system of government. That, obviously, is a difficult and gradual process.

One would never find the origins of the conflict by simply looking at the laws: China’s Regional Ethnic Autonomy Law is a detailed text of lofty rhetoric that prescribes a peaceful, orderly system of governance in China’s autonomous regions. Its preamble states, “Regional ethnic autonomy reflects the state’s full respect for and guarantee of ethnic minorities’ right to administer their internal affairs and its adherence to the principle of equality, unity and common prosperity for all nationalities.” Yet what happens in reality diverges sharply from what exists on paper. Seytoff says quite genuinely and passionately, “The Chinese Communist Party should first and foremost respect the Chinese constitution—which has a lot of great things!” The rule of law, though, clearly has weak standing. It’s a bleak picture: true religious tolerance toward Uyghurs is a mere mirage, always receding from the grasp of reality.