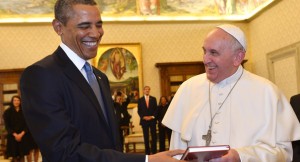 Many observers have commented that the meeting between President Obama and Pope Francis last week may have provided a bump for President Obama’s approval ratings. Considering that the President’s approval numbers are stubbornly dragging around the low 40s, while the Pope’s are hovering in the low 80s, they may have a point. Pope Francis has won the support of many millions around the world through his humility and open-mindedness, living in a guesthouse suite instead of the papal apartments, hosting homeless men at the Vatican for his 77th birthday, and famously saying on the subject of gay priests, “Who am I to judge?”

Approval ratings, though, are not the only reason President Obama wanted to meet with the Pope; the two see eye to eye on a number of pressing issues and during their meeting they reportedly discussed these topics. Both men are committed to eradicating human trafficking and fighting global poverty. President Obama remarked that he was “moved by [Pope Francis’s] insights on having a moral perspective on world problems.” Both have also discussed the issue of income inequality. The Pope has previously stated that “wealth and income inequality is a moral issue,” while the President has frequently brought up the issue in relation to his 2014 agenda.

As expected, there are frictions between these two powerful leaders. The meeting between them took place just days after the Supreme Court heard arguments regarding the ACA’s contraception mandate, which states that non-profit, religiously affiliated groups must provide contraceptive coverage to employees.

But neither of them seemed fixated on their differences. The tone of the meeting was set by symbolic gifts which were exchanged; President Obama gave the Pope seeds, while Pope Francis gave the President medallions representing peace between the two hemispheres. President Obama remarked immediately after the meeting that Pope Francis’s “voice is one that [he thinks] the world needs to hear.” Given the Pope’s clear willingness to speak out on politically charged issues, this meeting seemed to be more than a photo opportunity; the two hope to be laying the groundwork to listen to each other’s opinions on these issues in the future.