On a smoggy day in September, three hundred thousand people filled the streets of Manhattan from Columbus Circle to 86th and Central Park West, shouting slogans of unity and solidarity. Students and teachers, activists and politicians, actors and artists, community organizers and community members, had come together, all three hundred thousand of them, to protest one issue: climate change.

A few things are politically significant about the People’s Climate March. It effectively used climate change as a vehicle for political organization in an apathetic age — and did so in numbers similar to the March on Washington of 1963, and far surpassing the Occupy Wall Street movement of 2011. Perhaps more importantly, the march showed how important climate change has become to ordinary citizens, and the extent to which it is becoming not just a hot-button issue, but also something that many citizens want politicians and government agencies to deal with immediately.

But is that the right response to climate change? Should we be acting against it, or preparing for it as best we can? On Monday, October 13, the Department of Defense released a report on global warming: “The Climate Change Adaptation Roadmap.” “Adaptation” seems to be key to the Department’s approach to climate change: the report does not seek to manage the problem, or control it, or allocate relief. As Professor Joshua Busby of the University of Texas at Austin’s Lyndon B. Johnson School of Public Affairs puts it, the report “focuses on adaptation (responses to climate effects) rather than mitigation (reducing emissions).” In other words, the report suggests that the Pentagon is preparing for a future in which the effects of climate change manifest daily. It modifies its structures to suit what is increasingly looking like the unavoidable onset of global warming.

In the introduction to the report, Secretary of Defense Chuck Hagel wrote that, “By taking a proactive, flexible approach to assessment, analysis, and adaptation, the Defense Department will keep pace with a changing climate, minimize its impacts on our missions, and continue to protect our national security.” Climate change, it seems, is inevitable. Now, the Pentagon’s job is to ease its effects as much as possible.

So, what is the relationship between climate change and national defense? What do storms have to do with terrorism? What do deserts have to do with war? What is the relationship between melting ice caps and extremism? As it happens, global warming isn’t necessarily going to directly affect the armed forces’ ground operations. Instead, it will exacerbate volatile situations and catalyze conflicts. Shiloh Fetzek, a consulting research associate for climate change and security at the International Institute for Strategic Studies, says, “climate change may interact with other stressors—poverty, environmental degradation, political instability, and social tensions to accelerate conflict and instability detrimental to US interests.” Taking terrorism as an example, it is possible that climate change-induced drought in a volatile region will lead to political instability significant enough to push individuals to extremism—as was perhaps the case with the drought that occurred in Syria in the years before its civil war began.

Fetzek goes on, however, explaining, “In order for climate impacts to increase the risk of terrorism, many other drivers would need to be present, and climate impacts would by no means be the most significant of these.” 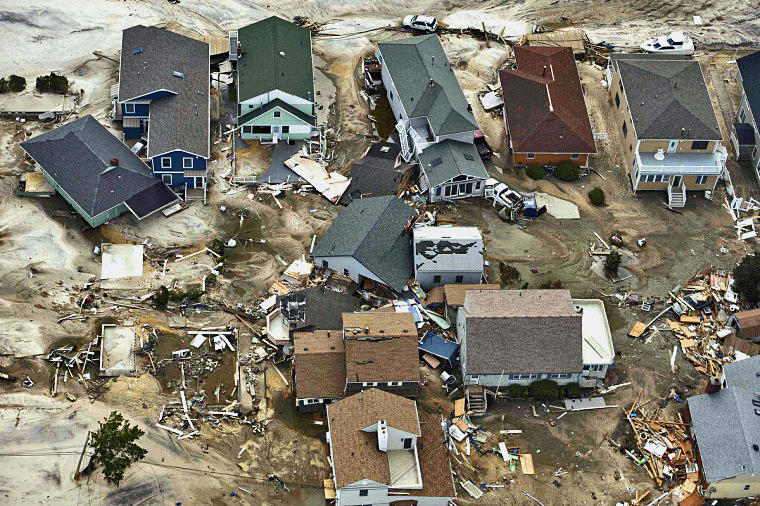 Still, global warming seems to be at the forefront of consideration for many government agencies. Although it may not be the direct cause of conflict, the government portrays climate change as the source of what apparently is a growing series of humanitarian and national security disasters. In the future, climatic catastrophes as diverse as Superstorm Sandy and Typhoon Haiyan may be common occurrences. Fluctuating dependence on oil reserves often fuels conflict in the petroleum-rich countries of the Middle East. In turn, the financial fortunes of these countries’ citizens depend on trade that is inextricably tied to the political responses to climate change. Frank Verrastro, Senior Vice President and Chair for Energy and Geopolitics at the Center for Strategic and International Studies, gives an example: “Lower oil and gas prices will make moves to renewable energy and efficiency improvements more difficult to justify on economic grounds.” The changing environment is becoming a powerful force, influencing political, economic, and social values around the world. By publishing this report, the Pentagon is trying to address issues without precedent in human history.

The climatic effects that the Roadmap tries to address will necessitate changes to the military’s infrastructure and a fundamental shift in the Department of Defense’s attention. For example, the report outlines greater resources that will be allocated to Arctic missions. As the ice caps melt, the Arctic will represent new trade routes, a front for oil extraction, and a theater of territorial expansion. Already, companies and countries have been jostling to make legitimate claims on Arctic resources, and the military is beginning to consider it an area of interest for the Navy (particularly now that Russia is becoming more prominent as a potential enemy). The report also tries to evaluate how rising sea levels pose a potential hazard for military training grounds. From Guam to Virginia Beach, the military needs to build new infrastructure to protect its assets and train its recruits to face different, harsher environments. These goals, however, will take time to implement. Apart from affecting the internal structure of the military, it doesn’t look like the report will significantly affect the daily lives of the general public.

The Roadmap’s publication suggests that climate change is being recognized as a major issue on an official level. This flies in the face of climate change deniers, some of whom hold positions in Congress. Oklahoma Senator James M. Inhofe, a vehement campaigner against anti-climate change legislation, dismisses the report as unnecessary, and says he hopes that the administration would focus on “other, legitimate threats.”  Individuals like Inhofe view the report as a political tool used by the Obama administration to draw resources away from what they consider to be more “legitimate” issues.

Climate change and defense experts, however, laud the Roadmap as a necessary and apolitical review of a very real threat. Francesco Femia, co-Founder and Director of the Center for Climate and Security, calls the report a “practical blueprint for making the military a more effective war-fighter in a changing operational landscape.” Busby notes that, as part of a series, it “demonstrates the military’s efforts to take this problem more seriously.” Fedzek celebrates it as something that can “move climate change out of the partisan deadlock space, to where it’s accepted as fact and also as something that’s happening now and requires action immediately.” One other thought is common among most experts: the political clout and pragmatic influence of the report depends upon bipartisan acceptance of climate change as a real and urgent concern.

The extent to which public opinion and bipartisan support of measures acting on climate change, however, is tenuous at best. Media attention on the report, says Fedzek, is especially “sensationalist,” and media outlets “grossly oversimplify the complex ways in which climate impacts can affect the broader strategic context.” The fact of the matter is that a changing climate will have much more nuanced effects than most threats the United States has previously faced. In other words, we can’t fight it directly; it’s an invisible enemy. All we can do is change our own structures to fit an environment that’s constantly in flux.

Although the Department of Defense’s Roadmap has gotten significantly more media attention than most of the other reports issued by federal organizations, its political clout and practical impact remain uncertain. Beyond some intra-military structural modifications, there seems to be little movement around state- or national-level reforms. Verrastro contends that, “without budget movement, the Department of Defense is unlikely to be able to take on major new efforts,” and asserts that, “regrettably, I don’t see this report materially impacting public attitudes.” The report is just a report, and a relatively obscure one at that.

Ultimately,  the report’s repercussions are generally limited to the Department of Defense, although the report will perhaps foster discussion in Congress around preparation for a future dominated by climate change. Despite protests like the People’s Climate March, the report doesn’t indicate significant change on government policy. As scary as it might be, it doesn’t look like levels of carbon dioxide in the atmosphere will go down anytime soon, and civilians are going to have to keep pushing for significant reform. Yet the Department of Defense’s Roadmap provides sensible advice. “Politics and ideology must not get in the way of sound planning,” writes Secretary Hagel in the report. In the face of a rapidly changing environment, sensible advice and sound planning seem to be the least we can do to prepare for the future.