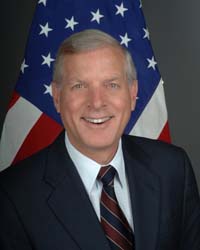 Christopher W. Murray has been the U.S. Ambassador to the Republic of the Congo since 2010. A career Foreign Service officer, Murray previously served as Deputy Chief of Mission and Chargé d’Affaires at the United States Mission to the European Union in Brussels, Belgium and as Deputy Chief of Mission at the U.S. Embassy in Beirut, Lebanon.  He has also been assigned to posts in Syria and Jamaica, as well as positions in Washington at the State Department.  Murray received a B.A. in government from Lawrence University in 1975 and a J.D. from Cornell Law School in 1980.  He speaks Arabic, French and Dutch.

As a student in college, I was fundamentally interested in global politics, economics, foreign languages and travelling. I majored in government and took courses in economics. I found that the Foreign Service offered an opportunity in global relations, as well as the possibility to make a positive impact on the world.

The Politic: This is your first experience as an ambassador. How does it compare to being a deputy chief of mission?

It is quite different; now, whatever I have to say — publicly, privately — has a great deal more impact because of my status as the representative of the President [of the United States]. What I say is taken much more seriously.

The Politic: How would you describe the United States’ current relationship with the Republic of Congo?

We have shared interests in regional issues such as security and climate change, and also the wellbeing of the Congolese people. We are especially interested in Congo-based security services.

The Politic: In your opinion, what are some of the biggest challenges facing the Republic of Congo?

Some of the biggest challenges are improving the education system, delivering better health care and diversifying their economy.

The Politic: Where do you think the Republic of Congo should focus on in terms of development?

They should focus on all levels of education, and especially vocational training, basic training in carpentry, mechanics and so forth. Another area is university-level math, science, computing, engineering and agriculture. They could also focus on military and training law enforcement, especially professionalizing their military senior officers.

The Politic: How is the U.S. government helping?

The Politic: What is U.S. policy towards allegations of corruption against President Denis Sassou Nguesso, and suspension of freedom of speech in the Republic of the Congo?

As a matter of policy, we advocate good governance and transparency in national matters everywhere in the world. To the extent where there is room for better governance in the Congo, we are in favor of it — as we would be anywhere else. We have taken some steps towards [advancing] greater transparency. Full financial transparency here, however, is somewhere off.

The Politic: Do you think that the Republic of the Congo has the potential to become a relative leader in its region?

Well, they have been playing a leadership role in addressing in the crisis in Central African Republic, and peaceful discussions between Democratic Republic of Congo and Rwanda. They also have a playing role as members of African Union Peace and Security Committee, and as members of the United Nations Human Rights Committee in Geneva.

The Politic: As a member of that committee, isn’t it odd for the Republic of Congo to be facing internal human rights issues?

We certainly encourage human rights everywhere… Human rights reports on Congo are of course a fair and accurate assessment of the situation here. Every country around the world has room for improvement, including our own. We encourage them [the Congolese] in human rights, including clamping down on human trafficking… They have also made some great progress in the LGBTQ category. We keep this in mind when dealing with the Congolese government.

The Politic: The U.S. is a major export market for the Republic of Congo. Is this set to change in the future?

The Congolese export petroleum almost entirely to the United States. We [the U.S.] import half of our petrol from countries abroad, and one of those countries is the Republic of the Congo, which will continue. Congo imports most of their consumer goods from countries with cheaper costs and price… We want them to buy American goods, but obviously they import the cheapest goods they can find, and costs of production are pretty high in the United States.

The Politic: Is there one experience, person, or event in the Republic of the Congo that has greatly influenced one or more of your policies? How so?

I believe the desire for the Congolese to diversify their economy away from oil, and also the role they play in regional conflicts, have both greatly influenced [my approach].

The Politic: What perceptions do you feel the average citizen of toward America?

Oh, the attitude towards the U.S. is very, very, positive. They follow our sports activities in particular — I would say basketball especially, given that there are several Congolese basketball players in the NBA. There is also a lot of positive admiration for our political system, something to which they aspire.

The Politic: Are there areas where the U.S. government is not meeting their obligations?

No, I wouldn’t say that at all. Of course, we can always be more active than we are now, but there are other areas that need more help than the Congo.

I think that we have made a lot of progress under the Obama administration. I don’t think there is anything that should be done differently; we are doing as much as we can with the resources we have. And, as you know, in our country, Congress decides the level of resources available to us.

Embassy of the United States to the Republic of the Congo: http://kinshasa.usembassy.gov