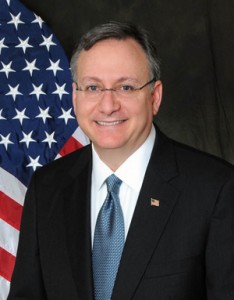 David I. Adelman currently serves as the U.S. Ambassador to the Republic of Singapore.  Adelman previously worked as a partner at the law firm of Sutherland, Asbill and Brennan LLP, and served in the Georgia State Senate from 2002 to 2010, where he was the Minority Whip.  Adelson’s tenure as Ambassador to Singapore has been characterized by an increasingly robust business relationship between the U.S. and Southeast Asia.  Since his 2010 nomination, American exports to and direct foreign investments in Singapore have risen to record highs, while the U.S. trade surplus with Singapore has grown to the fifth largest American surplus in the world.  He has received numerous academic and civic honors throughout his career, including the United States Navy Distinguished Public Service Award, the highest honor given to non-U.S. Navy personnel.  Adelman is a graduate of the University of Georgia, Georgia State University and Emory University School of Law, and is married with three children.

The Politic: Unlike most ambassadors, you have extensive experience in elected office.  How has this impacted your service as Ambassador?

The experience of having served eight years in the Georgia Senate was very helpful in that I am comfortable with public speaking and I can easily relate to the elected officials here in Singapore.  I understand what they are trying to do and the balance they are trying to strike, as well as my role as a steward of the American taxpayers’ dollars.  In the Georgia Senate, my committee work included chairing our urban affairs committee, so I dealt with issues related to urban planning.  These issues are relevant here in Singapore.  As a state senator, I led trade missions to the UK and Israel, so I had direct experience with trade and investment promotion.  It was extraordinarily helpful.

The Politic: To my knowledge, you had no direct Foreign Service experience before you were nominated to be an ambassador. So how exactly did you prepare yourself for such an important diplomatic position?

I am not a career Foreign Service officer.  But the most important trait one could bring to leading an American mission abroad is good judgment.  I think the diversity of experience I had as a businessman, lawyer, instructor at the University of Georgia and state legislator all served me very well.

To prepare, I had extensive consultations with the American agencies represented in Singapore, the NGO community, journalists and the like.  My previous experience in Asia was in the private sector and was in Japan and Hong Kong.  So this was my first experience in Southeast Asia.

The Politic: I’ve read that since your 2010 appointment, American exports to and direct foreign investments in Singapore have risen to record highs, while the U.S. trade surplus with Singapore has grown to the fifth largest American surplus in the world.  How did you the U.S. achieve these feats?

First of all, American businesses deserve the lion’s share of the credit.  But I think the President’s National Export Initiative played a role.  It was announced in January of 2010, shortly before I arrived in Singapore, and it called for — for the first time, at least in recent memory — an all-hands-on-deck intergovernmental effort to promote the export of American good and services.  In East Asia, our goods and services are valued and recognized as being of the highest quality.  Asian consumers will pay a premium for American goods and services.

A program I embarked upon for trade promotion went in two directions.  I led eight trade missions in the region.  Singapore is a place where, oftentimes, businesses have their regional headquarters.  These headquarters serve as the hub of Singapore and many different markets, sometimes all of Asia and definitely all of Southeast Asia.  So I partnered with more than 200 American businesses on trade missions; we went to Vietnam, Indonesia, Malaysia, India and Myanmar.  We typically visited a host country each day, we had meetings with government officials, meetings with local business leaders and meetings with American businesses that have direct experience in those countries.  Our goals were threefold.  First, if there were an American business that had a particular issue pending before the local government, we would advocate on that issue.  Second, if there were American businesses looking for partners on the ground, we would look for an adequate partner.  We did, I suppose, matchmaking activities.  Third, there were some businesses doing due diligence — just kicking the tires.  We arranged briefings from macroeconomic briefings to academic briefings to consultancies with large bankers, law firms and the like.

I also visited fifteen American cities — a reverse trade mission, so to speak.  And what we did with the eight regional trade missions was to take, on average, about two-dozen American businesses, ranging from large multinational corporations to small and medium enterprises.  We would typically arrange a daylong seminar where we would partner with Singaporean economic development agencies.  We would start with macroeconomic presentations to familiarize businesses with Singapore and Southeast Asia.  We would typically have presentations by the Export-Import Bank in the U.S. and by the Department of Commerce.  Our American partners were typically local Chambers of Commerce, states and cities.  I would say that about half of the meetings in American cities would also included presentations from academics and business schools.  For example, we went to the University of Washington Business School for a seminar.  I think about 100 to 150 different businesses attended.  We also had presentations at Georgia Tech in Atlanta and Michigan State in Lansing.

The Politic: As you may know, Singapore is a country of particular interest for Yale students, given that the Yale-NUS College, Singapore’s first liberal arts college, is slated to open in August of 2013.  How do you think educational endeavors and exchanges impact America’s diplomatic relationship with Singapore?

Educational exchanges and joint programming are an important way we can develop our relationship with ordinary Singaporeans, as well as Singaporean institutions.  Currently, there are approximately 4,500 Singaporeans studying in the United States, oftentimes at America’s upper crust institutions of higher education — including Yale.  There are about 750 or so Americans studying at Singaporean institutions, the vast majority of whom are at either the National University of Singapore or the Singapore Management University, which are two of the three flagship schools here in Singapore.  Those types of exchanges, and, indeed, the Yale-NUS program are representative we can institutionalize the Singapore-U.S. relationship.  The Yale-NUS endeavor is very constructive and a very positive development in terms of deepening our bilateral relationship with Singapore.

The Politic: Many Yale students have protested the University partnering with the Singaporean government, citing its restrictions on free speech and ban on homosexuality.  How do you respond to these objections?

Well, it is not for me to respond to these objections.  The protests were not lodged to me.  It is true that there are important differences between the laws of the United States and the laws of Singapore.  And it is true that Singaporeans do not enjoy the same First Amendment protections that Americans do.  Indeed, there are very few countries around the world that entitle their citizens to the strong freedoms contained in the Bill of Rights.

That being said, there is reason to be confident that the faculty at Yale-NUS will enjoy academic freedoms comparable to those enjoyed on American college and university campuses.  Holding the United States out as an example of how individual liberties and the marketplace of ideas has resulted in important advances in human and societal achievement.  The best way to further guarantee this example is to show Singaporeans demonstrate how rights work and that they do not threaten security or stability.  The Yale-NUS program may very well demonstrate the importance and effectiveness of freedoms within the context of higher education.

The Politic: What misconceptions do you feel the average American citizen has toward Singapore?  And vice-versa?

In terms of how Singaporeans view the United States, they may not fully appreciate the inclusiveness of the U.S.  Interestingly, both Singapore and the U.S. are nations of immigrants.  The American model is that of the melting pot while the Singaporean model may be more a model of a mosaic.  The American melting pot, arguably, is unique in the world, so it may not be fair to compare the way Americans integrate immigrants and promote diversity to anyone else in the world.  But I am not sure they fully understand it.

The Politic: What are the major areas for growth in US-Singaporean relations?  Where can US diplomatic efforts be most successful?

Think of the relationship as divided into three categories.  First, there is the military-to-military relationship, which is quite strong.  We had a major milestone here in Singapore by successfully negotiating with the government to allow the deployment of four U.S. Navy combat ships to a Singaporean naval base.  Second, there is the economic and trade relationship.  We talked about that a little bit.  Success in terms of trade and investment is at an all-time high.  And third, there is the cultural and educational relationship — as well as non-military security issues, like law-enforcement issues.

The place where our relationship stands to improve the most is finding a way to better institutionalize our non-military security arrangements.  To be sure, we have very robust relationships with Singapore, but the law enforcement community believes they can be better organized.  I think that is an area where we can grow our relationship.  I have already mentioned educational exchanges; that is another area where there is room for improvement, especially by finding ways to engage in joint efforts like that of Yale-NUS.

The Politic: How significantly do you believe American elections affect diplomatic relations with Singapore?

The American election of 2008 had a big impact on the bilateral relationship because President Obama made it a priority to increase the intensity of our engagement in Asia.  What was originally described as a pivot to Asia is now characterized as a rebalancing to Asia, and it was a significant shift in American foreign policy.  Singapore, of course, is one of America’s anchors in Southeast Asia, so the 2008 election was significant.  You would have to examine other elections individually.  For example, one can argue the election of President [Franklin] Roosevelt may have led to America’s defeating Japan and liberating Singapore.

The Politic: Is there one experience, person, or event in Singapore that has greatly influenced one or more of your policies?  How so?

We have reached diplomatic milestones with the successful negotiations to deploy the combat ships.  We reached diplomatic milestones for trade and investment.  Former Secretary of State Hillary Clinton delivered the first major American economic speech in Singapore after the 2012 re-election of President Obama.  The Prime Minister of Singapore met with the President in the Oval Office on April 2 of this year.  These are all important events; it is hard to point to one and say it stands out.

There was a time in the last decade when the hard-earned goodwill of the United States had been diminished and America’s reputation had suffered.  Much of this related to the war in Iraq.  I believe that winding down the American military engagement in Iraq and the resetting of America’s relations around the world have gone a long way toward recapturing and restoring the goodwill enjoyed in four corners of the world.  It has been a good four or five years for American policy.  In particular, the rebalancing toward Asia has been strategic and will bear fruit over the next thirty years.

Embassy of the United States to Singapore: http://singapore.usembassy.gov/index.html