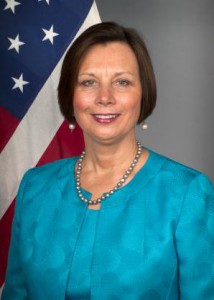 Dawn M. Liberi is the U.S. Ambassador to the Republic of Burundi. Before becoming an ambassador, Liberi served with USAID for twenty years. Her assignments in Africa included USAID Mission Director in Uganda (1998-2002) and USAID Mission Director in Nigeria (2002-2005), and USAID Mission Director in Iraq (2005-2007), where she worked in areas relating to community development, health, and nutrition. She was an Executive Civil-Military Counselor with USAID from 2007 to 2009, serving as the Senior Development Advisor to the Commander of the U.S. Central Command. More recently, Liberi held several positions in Afghanistan, including the Coordinator for the Interagency Provincial Affairs Office at the U.S. Embassy in Kabul and Senior Civilian Representative for the Combined Joint Task-Force 82, the civilian equivalent of the Commanding General. She was the Senior Assistance Coordinator at the U.S. Embassy in Tripoli in 2012. Liberi holds a Bachelor’s degree from Hampshire College and a Master’s degree in Public Health from the University of California at Berkeley. She is also a graduate of the Industrial College of the Armed Forces at the National Defense University. Liberi has won numerous awards, including two Distinguished Honor Awards and the U.S. Army Superior Civilian Service Award.

I was originally interested in the development arena. In fact, I joined USAID as a development intern right out of graduate school. I had been interested in doing public health initially and wanted to do international public health. I joined the Foreign Service, began as a health officer, and worked my way up from a technical area into management, administration, and leadership positions. I became a USAID mission director in a number of places and then made the switch over to becoming an ambassador. These things have been my career for over 30 years now.

The Politic: In terms of your role as a U.S. Ambassador, could you give us a sense of your daily operations? How are your time and responsibilities split between connecting with Washington, the Burundian government, and civil society?

In terms of how I spend my day, a large percentage of my time is spent interacting with the Burundian government, as well as with civil society and the private sector here in Burundi, to represent the United States Government and help Burundi with its own goals. They are a post-conflict country. They have come out of a long history of civil war, and after signing a peace agreement, they have been trying to move from a post-conflict society into one focused much more on a development and economic assistance program.

One of the things that Burundi is focusing on is their poverty reduction strategy, and the U.S. government is really helping them with that. In fact, we are the largest bilateral donor. The United Nation is probably the largest single entity, but in terms of bilateral countries, the U.S. is the largest donor. We support a development program of about 50 million dollars a year, and we also support the regional peacekeeping operations in Somalia, the AMISOM [African Union Mission in Somalia] program—that’s somewhere around 30 million a year. I’ve spent a lot of my time engaging in all of those issues.

The Politic: How have the development challenges you’ve faced in Burundi differed from those in the other countries in which you’ve worked?

Burundi is the sixth country in sub-Saharan Africa that I have worked in. A lot of the challenges are similar, in terms of the types of health issues, like the major killers of mothers, children, infants, etc. The health issues are the same in many of these countries, but the scale is different. One of the key challenges that Burundi faces now, and that a number of countries have already faced and addressed, is the very high population growth rate. Right now, Burundi has one of the highest fertility rates in the world: six children per woman. That means the population will double in 25 years, and that is a huge challenge.

Most of the African continent has decreased in terms of its population growth rate, which has enabled those countries to move ahead economically. In fact, eight of the ten fastest-growing economies in the world right now are in sub-Saharan Africa. Part of it is because they are coming up economically, but also because many of these other countries have gone through or are going through a demographic transition. Burundi still has to do that. I think this is one of the key challenges for them in the future, particularly because the size of the country is small in terms of landmass, and the land itself is very difficult to support the level of population. That is one of the key reasons why there’s so much poverty, as well. This is a huge challenge. It is one of the things we’re engaging the government on.

The Politic: With regard to economic development, Burundi ranks 167th among 177 countries on the 2007 UN Human Development Index. What specific goals for Burundi’s development does the U.S. hope to support and achieve?

First of all, I think that Burundi can be a model, such as in HIV/AIDS, because the prevalence rate is not that high here in sub-Saharan Africa. This means you can do a lot here in terms of enabling Burundi to be a kind of model for other countries in combating HIV/AIDS. So that is one key area. Another goal is trying to help the Burundians focus on poverty reduction, increasing the incomes of people, and addressing issues like malnutrition. Burundians have among the highest malnutrition rates, not just in sub-Saharan Africa, but in the world. So here is another area where the U.S. is a leader in helping them to reduce malnutrition, malaria, and other types of diseases.

In other areas like economic growth, we are also helping the Burundians to diversify their economy. We have spent a lot of time working in the coffee sector, which is their biggest export, and helping them look at how they can identify high-end markets. They have a very high grade of coffee, but they need to expand some of that market.

I am also helping them with regional integration. Burundi is the most recent member of the East African Community (EAC), and one of the things they need to do is integrate into the regional economy. The U.S. is helping them with this, particularly with English language training, because the staff in others countries speak English, and Burundi is still the remaining francophone country. We’re spending a lot of time on public diplomacy, as well as English language training programs, and on helping them integrate and compete regionally. I would say those are the four major areas, aside from AMISOM and peacekeeping.

The Politic: Can you speak more about Burundi’s role in regional peacekeeping, especially given that Burundi recently came out of its own civil war?

Again, this is where Burundi has taken a lead in the region. Burundi and Uganda provide the largest number of troops to the regional peacekeeping operation in Somalia. That is pretty significant, considering that Burundi is probably the smallest East African country, although its population is increasing fairly significantly. Burundi has taken the lead in providing troops to Somalia and doing a number of the peacekeeping operations. The United States is helping Burundi with training and professionalizing its military. We will provide equipment and enable them to continue peacekeeping not just in Somalia, but potentially other areas of Africa as well in the future.

The Politic: Is there one experience, person, or event in Burundi that has greatly influenced one or more of your policies? How so?

The second vice president in Burundi has taken the lead on the poverty reduction strategy program. He was the impetus behind a conference last year in Geneva to really focus people’s attention on Burundi and its development goals for the future. He did a very good job of that. There are a number of other key leaders on the development side, like the minister of health and minister of agriculture. They have provided a structure so that the U.S. can continue its support and help the government put policies in place that can enable the development process.

The Politic: If you had to single out one thing that Americans should know about Burundi or U.S.-Burundi relations that they might not be aware of, what would it be?

We share a lot of things in common; it is very interesting. The United States has been a partner with Burundi for about fifty years, since Burundi’s independence. One of the things we share in common are the great lakes. There are the Great Lakes in the United States and there are the Great Lakes here in this area of Africa. Burundi is literally adjacent to one of them, Lake Tanganyika, which is the second-largest lake in the world and probably the deepest. It is one of those things that I think American citizens would not equate with Africa or with Burundi. 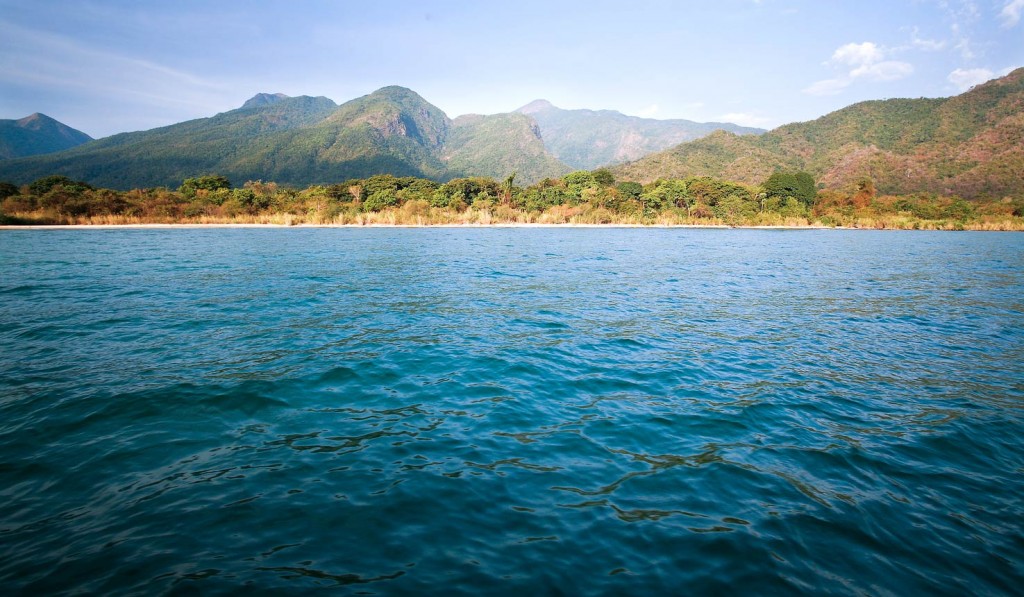 The Politic: As the African Union commemorates its 50th anniversary this year, how effective do you find it in addressing the issues Africa faces?

I think the African Union has taken a lead role in terms of looking at some of the steps to peace and stability in the region. They are working very, very hard on a number of issues in sub-Saharan Africa, be it the Great Lakes or issues in a number of conflict areas on the continent. The African Union has been taking a lead in trying to bring African countries together to address their own issues. That’s where it has probably had some of its most effective impact.

Obviously, we spend a lot of time and energy on American diplomacy and developing partnerships with all of the countries where we work. We have an entire diplomatic core that engages on these issues — we have our Secretary of State, who takes the lead, and the White House — so I would say that our presentation abroad is very robust. Clearly, it depends on the various issues and how people engage on those issues. One of the big things that we have in terms of presenting American policy is our diplomacy.

Here in Burundi, we are establishing what we call American corners, which are essentially mini-libraries around the country that have resources, internet, and access to U.S. databases for information. We teach the English language there. We have English-speaking clubs. People get introduced, if you will, to American culture and the most important things that America stands for, in terms of democracy, freedom of speech, freedom of expression, etc. I think those are some of the key ways that America is presented to people in Burundi.

I think America’s greatest asset is its people. Having Americans engage as individuals is one of the single biggest things that we continue to do. Exchange programs are great. I would love to increase exchange programs for Americans to go abroad and for other citizens to come to the U.S.

I would like to end by saying that if anyone is thinking about a career in the Foreign Service, it is a great career and one that I think a lot of young people would find very, very interesting and really want to pursue. We need America’s best and brightest to be out there representing the country.

Embassy of the United States to Burundi: http://burundi.usembassy.gov

Adira Levine is a staff writer for The Politic from Chicago, Illinois. Contact her at adira.levine@yale.edu. View more posts