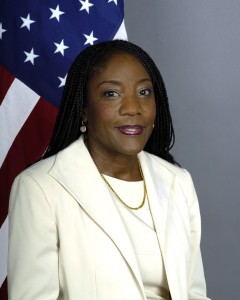 Frankie A. Reed was confirmed as Ambassador to Fiji, Kiribati, Nauru, Tonga, and Tuvalu on August 3, 2011. Prior to joining the Department of State, Reed practiced law, worked in print journalism, and spent two years as a Peace Corps volunteer. A career member of the Senior Foreign Service, she has served as the Deputy Assistant Secretary in the Bureau of East Asian and Pacific Affairs, responsible for relations with Australia, New Zealand, and the Pacific Island posts. Reed’s earlier assignments include Deputy Director in the Office of Australia, New Zealand, and Pacific Island Affairs; Political Section Chief in Dakar, Senegal; and Political Officer in Nairobi, Kenya and Yaounde, Cameroon. She also worked as a Desk Officer in the Bureaus of African Affairs and Western Hemispheric Affairs.  Reed is a member of the California Bar Association and is a graduate of the University of California, Berkeley and Howard University.

An interest in Public International Law led to a summer program at the International Institute of Human Rights in Strasbourg, France. There, law students mingled with young diplomats from some 50 countries. A second tour diplomat from Burkina Faso’s embassy in Paris helped spur my interest in diplomatic career. He later became that country’s Ambassador to the U.S. and eventually Foreign Minister.

The Politic: You are the U.S. ambassador to five small, Pacific Island nations — all of which are very diverse politically, economically, geologically, etc. What unique challenges does this pose as compared to someone with an ambassadorship to one nation? 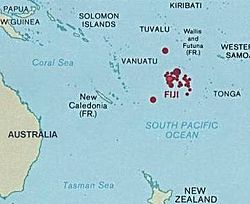 It is indeed complex to manage relationships with multiple nations spread across millions of square miles of ocean. The portfolio also is one of the most fascinating that I have covered. These are small nations, but each one has its own form of government, its own culture, its own economic structures, and its own history and relationship with the United States. While there are many common themes, each nation has its own unique challenges. I spend half my time traveling to the other countries of the region and within Fiji as I find it’s important to establish personal connections, not only with government officials but also with civil society, business owners, and students. We have offices in the Embassy that cover an even larger number of countries and embassies. For example, our Defense Attaché is often traveling to Papua New Guinea or Tonga, our Regional Environmental Officer will attend tuna treaty negotiations in the Solomons, and our Regional Public Affairs Officer also supports the Embassies in the Marshall Islands, Micronesia, and Palau. Infrastructure in these countries can be very rudimentary. Flights can be rare. It can be difficult to get through to these places by telephone, and high speed internet is completely out of the question. Nonetheless, we must maintain relationships, and stay in contact with our friends in all of these countries.

The Politic: Fiji has had a very volatile political history. They are supposedly in the process of organizing for free elections to take place in 2014. What are the prospects for democracy in this nation, and is there still a strong military influence despite these developments?

The military regime that took power in 2006 remains in control, but we are optimistic that the current government will make good on its promises to hold free elections in September 2014. The U.S. government, through the U.S. Agency for International Development, is supporting these efforts as long as there are structures in place to ensure that the elections will be free, fair, and credible. Our goal is not to influence the outcome but to help ensure that the Fijian people are able to freely select a government that they feel represents them and their interests.

The Politic: Historically speaking, there has been a strong tendency for informal segregation between the two major ethnic groups in Fiji (Native Fijians vs. Indo-Fijians). Are any measures being taken to ensure greater equality, especially political equality, among these two groups?

Fiji, much like the United States, is very ethnically diverse. The two main ethnic groups, the iTaukei (indigenous Fijians) and the Indo-Fijians (Fijians of South Asian decent) are joined by ethnic Chinese, ethnic Europeans, and small Fijian populations that trace their ancestry to other Melanesian, Polynesian, and Micronesian nations and cultures. The United States of America certainly advocates for equality before the law for all people, irrespective of ethnicity, here in Fiji and around the world. At the same time, there is also a growing recognition in Fiji itself that the nation’s diversity can be a source of great strength. You can see this in some of the evolving government policies, and Fiji’s planned elections in 2014 will be the first that will not formally incorporate ethnic provisions into the voting rules. The Fijian government has said that it aims to eliminate race-based voting that took place in the past.

The Politic: A few of the countries you work with, for example Nauru, are heavily dependent on foreign aid due to a lack of domestic economic prospects. What measures are you taking to promote economic growth in these nations? 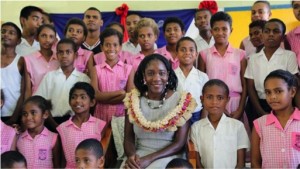 Importantly, we are helping these nations to ensure that they are able to harness what is perhaps their greatest economic resource: the sea. In many of the small Pacific nations, there is significant hope for economic growth based on marine resources. Some call this idea the “blue economy,” and it makes a lot of sense in countries where the size of territorial waters far exceeds the size of the land. Economic growth may be found in fishing, aquaculture, and there is great interest in the prospects for harvesting of undersea minerals. At the same time, small Pacific Island nations have little ability to patrol their own vast territorial waters, and illegal and unregulated fishing is a major problem in the Pacific, robbing nations of their resources while potentially damaging the environment. Recognizing this dilemma, the United States has signed several cooperative maritime law enforcement agreements, or more simply “shiprider agreements,” with Pacific nations. Under the terms of these agreements, the law enforcement agencies of Pacific nations — including Nauru, Kiribati, Tonga, and Tuvalu — are able to place their law enforcement officers aboard U.S. Coast Guard and other U.S. government vessels from which they then conduct patrols of their own territory. In this way, the United States extends the reach of Pacific law enforcement, and helps to make sure that these nations are able to protect the economic potential in their seas, stop illegal exploitation of marine resources, and guard against unsustainable fishing methods that damage the sustainability of the ecosystem.

Several nations in the Pacific have full diplomatic ties with Taiwan, and Taiwan is an active donor in many of these nations as well.

The Politic:  Several of the countries you work with, due to their low elevation above sea level, are highly concerned about the effects of climate change (their largest worry that rising sea levels will completely wipe out their nations). What steps are the individual nations taking to combat climate change, and are their concerns getting any international recognition from larger players such as the U.S., China, Russia, etc.?

The Pacific Island countries comprise one of the most vulnerable regions in the world to climate change and the effects can already be seen throughout the Pacific, from the droughts in the Marshall Islands to the loss of arable land in Kiribati. President Obama in his announcement of the Climate Action Plan in June 2013 stressed that the U.S. will help lead international efforts to address global climate change. While no single step can reverse the effects of climate change, the President believes we have a moral obligation to our children to leave them a planet that’s not polluted and damaged, and his new climate action plan lays out the path he sees for how we can best achieve that imperative. In the Pacific region, the U.S. works in cooperation with partners to help the most vulnerable cope with the impacts of climate change. For example, USAID’s US$ 23.6m Coastal Community Adaptation Project will support district and community-level climate change projects in 12 Pacific Island nations to build the resilience of vulnerable coastal communities to withstand more intense and frequent weather events and ecosystem degradation in the short term, and sea level rise in the long term. Other countries in the region are also working with governments and communities on the ground on adaptation programs and I imagine those efforts will only increase.

Embassy of the United States to Fiji: http://suva.usembassy.gov/index.html