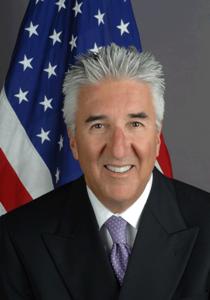 Gene Cretz was sworn in as U.S. Ambassador to Ghana on September 11, 2012. Cretz hails from Albany, New York. He attended the University of Rochester with a degree in English Literature and received a master’s degree in linguistics from the State University College at Buffalo. Cretz served as a Peace Corps volunteer in Kabul, Afghanistan from 1975-1977, and he joined the Department of State in March 1981. On July 11, 2007, President Obama nominated Cretz to serve as U.S. Ambassador to Libya. While awaiting Senate confirmation, Cretz served as the Bureau of Near Eastern Affairs Deputy Assistant Secretary for Egyptian, Israeli-Palestinian, Jordanian, Lebanese and Syrian Affairs. The Senate confirmed his appointment to Libya on November 20, 2008, and he served there from December 2008 until May 2012. Cretz speaks Dari, Urdu, Arabic, and Chinese.

The Politic: Why did you join the Foreign Service? What called you to it?

I was a Peace Corps volunteer in Afghanistan from 1975 to 1977. That kind of experience gives you the most basic view into what diplomacy is, especially at the grassroots level. I think that anybody who serves in the Peace Corps gets the sense of what dramatic impact you can have on the perception of your country in a foreign country. That certainly was the case for me in Afghanistan. I think the impact we made on the Afghans was tremendous. Part of that recognition was, in late 1977 when Russians were beginning to extend their influence in Afghanistan, the Afghan authorities began to call to our volunteers in the provinces. I also had some contact with people in the embassy during that time and saw the work they were doing, and that is what led me into the Foreign Service.

The Politic: Is there one experience, person, or event during your tenure in the Foreign Service that has greatly influenced your decisions or policies? In what way?

My experience in Libya and what I saw of such a repressive regime under [Muammar] Gaddafi. I hope my mission’s reporting of events there contributed to the ensuing changes in Libya. We looked at the whole system, starting from Gaddafi on down. We analyzed it and we sent it through cables. I am not saying that the messages we sent started that revolution, but I like to think that our presence there and our programs in Libya had something to do with starting the revolt against Gaddafi.

The Politic: What lessons have carried through your experience as Ambassador to Libya and onto your mission in Accra?

The process for most of us to become ambassadors is step-by-step — taking over sometimes twenty or thirty years — and each experience has an effect on you. I have learned that it is ‘people first and people last.’ That is a lesson any ambassador worth his salt should have deeply ingrained. That is the message Colin Powell brought to the State Department when he became Secretary of State. One has to be prepared to present our country in the best light possible.  Our aid and development programs, when administered in a proper way through USAID and the CDC here, there is a lot we can do for the Ghanaian people. The lesson is that if American taxpayer money is carefully allocated, it can be really beneficial to a country like Ghana.

The Politic: American universities like Yale and American companies are engaged in Ghana in health and development projects. How do you facilitate this kind of collaboration, and what is the future of these relationships?

We have a very close relationship with American commercial enterprises. We have recognized that collaborations can be very powerful, and many corporations are trying to highlight their corporate responsibility. American companies do this in many different ways. We also give universities briefings, and we keep in touch with academia when they’re here.

The Politic: What sort of exchange or community outreach programs do the most good and have the greatest impact?

We have done a tremendous amount in combating malaria and HIV/AIDS. We also have done work in education. There is a very positive image of America here. A lot of that can be attributed to the work we do with the Ghanaian government

The Politic: What sort of misperceptions do you see between Americans and Ghanaians? And what work do you do to correct those?

From the American side, sometimes there is the sense that Africa in general and Ghana are backward and very difficult to change. And people believe that development is a very difficult and risky proposition. It really takes an open attitude to find out that people here are very sophisticated — they do not want handouts. We need to take the attitude that we’re here to assist and not here to direct, preach to, or persuade. We can work here and do very good things with the Ghanaians.

In terms of Ghanaian misunderstanding of the United States, I don’t see very much of it. There is a tremendous sympathy and affection for the United States — that existed even before President Obama took office — and there has been a surge in that kind of affection. I am greeted very warmly everywhere I go, and I don’t see any downside like you would see in parts of the Middle East.

It depends on where you go. In the Middle East, there is resentment and dislike of Americans because of our policy with respect to Israel. In other areas, there is dislike of America because of actions it takes that are seen as anti-Muslim. Generally, I think we send very high-quality people abroad. There is a very healthy respect for our institutions; even when I was in Libya, I saw this. There will always be the problem that people do not like the way we do things, but don’t forget that our interests extend worldwide. I don’t think it is surprising that you would find some anti-American feeling in some quarters of the world. But over thirty years, I have experienced a very healthy respect and admiration in the world for America and what it stands for.

Embassy of the United States to Ghana: http://ghana.usembassy.gov

Austin Jaspers is a contributor to The Politic from East Greenwich, Rhode Island. Contact him at austin.jaspers@yale.edu. View more posts