Harry K. Thomas, Jr. is a career member of the Senior Foreign Service and served most 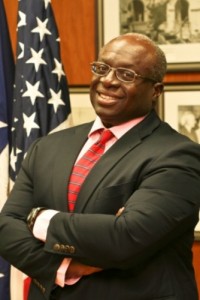 recently as Director General of the Foreign Service and Director for Human Resources of the U.S. State Department. Prior to that, he served as a Special Assistant to the Secretary and Executive Secretary of the Department.  As Executive Secretary, he led the State Department Task Force that resulted in the safe evacuation of over 15,000 people from Lebanon in the fall of 2006. Thomas joined the Foreign Service in 1984, and served as U.S. Ambassador to Bangladesh from 2003 to 2005. He also served in the White House as the Director for South Asia at the National Security Council from 2001 to 2002. His other postings include: New Delhi, India; Harare, Zimbabwe; Kaduna, Nigeria; and Lima, Peru. Thomas speaks Spanish, Hindi, and Bangla and is learning Filipino. He is a graduate of the College of the Holy Cross and pursued further study at Columbia University.  He holds an honorary doctorate of Philosophy from Loyola University of Maryland and formerly served as member of the Board of Trustees of the College of the Holy Cross and the Board of Governors of the National Defense University.

The Politic: What led you to join the Foreign Service?

I would describe it as unique and challenging. It has consistently been something different to face everyday, whether it is here in the Philippines or when I was in Bangladesh. Today, for example, I had breakfast with the Korean Ambassador — Korea is a very important country to us, in terms of both trade and the military. After my interview with you, I will do a courtesy call with incoming officers — people who just arrived at post — to see how they and their families are adjusting, prepare for another interview, and then prepare for a trip this week to the location of our second July 4th party. The Philippines is unique in that we have two, one here and one in Baguio, where WWII ended on September 3, 1945 when General Yamashita surrendered. I will have lunch with an old friend and his wife, and afterwards, I will do a tour of the Holiday Inn Hotel, a British company with many American interests; they have 5 hotels here in the Philippines. I will have coffee with the Philippine Ambassador to the U.S., who is on leave back from the States, and then I will go to the French National Day held tonight, as well as a 007-themed 75th birthday party of a wealthy businessman. Last week was our first July 4th party, and the week before, we had our LGBT annual reception. In a few weeks, we will show a movie on Jackie Robinson and do our annual donation for kids to play baseball. I don’t think there is any typical day.

As for the Philippines, because it is very much a social media country, we have to engage our many folks from our Embassy with our official Facebook account. We are, thanks to our Public Affairs Section, very engaged in social media. We have active Google+, Twitter, and Facebook accounts and are proud to be clearly in the top of all Embassies on all counts. We follow the social trends to see what is going on. We also put thought into taking care of our local employees. On the weekend, we were very happy to celebrate one who was selected as the Local Employee of the Year for the Bureau of the East Asian and Pacific Affairs in the State Department for his hard work — we salute him. We are doing a lot — we take care of a lot of military that come in and out of here, and we have a 52 year-old Peace Corps, one of the largest contingents in the world.

The Politic: One of the largest cooperative efforts between the U.S. and Philippines has been in defense and security, with the Manila Declaration recently reaffirming the Mutual Defense Treaty. What kinds of defense-oriented cooperation have you pursued during your term, and how has this security partnership been received locally? Why is such a partnership so crucial to U.S.-Philippines relations?

The Philippines is one of our few treaty allies around the world. We have a very strong defense treaty; we reaffirmed that by Secretary Kerry and President Obama. In terms of what we have pursued during my and my predecessors’ tenure, the Philippines is the largest recipient of U.S. military assistance in Southeast Asia, and what we try to do is help them go from an inward-based military — which is primarily looking at the Abu Sayyaf terrorist group and other terrorist groups — to a maritime capability, where they can protect the environment, including the coral reefs, which are very important to their future as well as ours; be first responders to typhoons; and strengthen their coast guard, fishery bureau, and navy. So that has been a transition.

We also have our Joint Special Operations Task Force Philippines, which are special operation forces that are training and assisting the Philippine military to combat terrorists. Our Joint Special Operations Task Force does not engage in combat, but they do train Filipinos to combat terrorists. We provide a lot of military training on the whole — a lot of Filipinos go to various war colleges — and each year, we send Filipinos to our military academies. This year, a woman is going to the Air Force Academy for the first time. We have a very long history, primarily because of our shared values but also because of relations here. We built the Philippine Military Academy based off of West Point and also have a former Naval Base to which we are sending ships. There are also ships in Japan and Singapore. Our relationship has been very, very good. I do also want to emphasize that we will continue in helping with typhoons and helping first responders. Last December, USAID and the U.S. Military took the lead to responding to the typhoons; planes were on the ground seven hours after we received the phone calls. These are things people do not typically think about.

The Politic: With control of the South China Sea under dispute and China confronting the Philippines, what is the Embassy’s role in mitigating conflict?

With the South China Sea, as President Obama and Secretary Kerry have said, we should speak for peaceful resolution. We believe that all states need to sit down at the negotiating table and look for a code of conduct. We also point out that there are several cross claims. We want this to be resolved peacefully, which is why we are very supportive of a multilateral approach. Clearly, the Philippines has gone to international arbitration with the United Nations, and the UN supports arbitration as one of the mechanisms a country can utilize. But let’s be clear — the U.S. does not take sides on territorial disputes of any kind. We do, however, want to see that these issues are decided on a peaceful negotiating table.

The Politic: With the U.S.-Philippines Partnership for Growth, the U.S. is making significant efforts to spur economic development in the Philippines, which has recently seen promising growth. What have been the greatest challenges facing the Filipino economy, and what has kept it from reaching the ranks of the highest-performing Asian economies? How can the U.S. help boost investment and accelerate growth?

The economic question is important. Economic trade is very important and is key to the Philippines’ future. I want first to congratulate President Aquino, his cabinet, and the business community — for the first quarter of the year, they had the highest growth in Asia. Real estate is doing very well here, but they face the same challenge that we face in the U.S. in terms of finding increasing growth: how do you employ people for whom there are no jobs? The challenge in the Philippines is that they are moving to a system that will give them better education in the long run—they are establishing vocational schools to give people more opportunity. The Philippine Congress is now debating whether or not they will allow for changes that we believe would also limit foreign direct investment, which is necessary in countries. Whether they do that, though, is up to the Filipino people and the legislature. But in this country, farmers cannot own land, and in many sectors, foreign ownership is limited to 40 percent, so that is a negative. The Philippines also have the highest energy cost in Asia, which limits manufacturing and obliges a lot of Filipinos to seek opportunities abroad. These are people we believe are very talented, and given the opportunity, they would do very well here. There are over 9 million we know of who are abroad. But again, it is their decision to decide how they want to go.

The Politic: How do you feel that America is represented abroad, and are there any elements of American foreign policy that you think should be changed?

I think America is well-represented abroad. We have the world’s finest Foreign Service. No disrespect, but when I first joined the Foreign Service, it really was dominated by the Ivy Leagues, and others coming from different schools were not given an opportunity. Our country is better now for having diversity. As members of the Foreign Service, we are instruments of the President’s foreign policy, and it’s our job to carry out that foreign policy no matter who is president. We respect the choice of the American people and always will. President Obama is a great representative of the United States and what we as the United States have been able to achieve in 237 years.

Embassy of the United States to the Philippines: http://manila.usembassy.gov