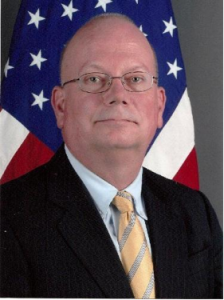 James F. Entwistle, assumed the position of U.S. Ambassador to the Democratic Republic of the Congo in 2010. A career Foreign Service Officer since 1981, Entwistle’s posts abroad have included Cameroon, the Central African Republic, Malaysia, Maldives, Niger, Sri Lanka, and Thailand (with extensive travel to Cambodia). During his time in the United States, Entwistle served as a watch officer in the Bureau of Intelligence and Research, the desk officer for Kenya and Uganda in the Bureau of African Affairs, and the Bureau of Consular Affairs. Entwistle graduated from Davidson College in North Carolina.

The Politic: Thank you for taking time out of your day to speak with us. My first question is: Why did you join the Foreign Service?

If I had told you that I always wanted to be in the Foreign Service, it would not be true. I had never heard of the Foreign Service. Then, when I was a junior in college, I saw a flyer about it. I took the exam once; I flunked. Took it again for spunk. I got [in as] an Offer, and I am still here. I would be lying if I said that it was the result of some life-long interest in this kind of work.

The Politic: Can you tell me a little bit about the different placements that you have had with the Foreign Service?

In 1981, I was in Cameroon, followed by an assignment to Niger in West Africa. Then, I was in Washington, then Thailand, then the Central African Republic. Then back to Washington. Then I went to Malaysia, Sri Lanka, Bangkok, and then I came here to Kinshasa. As you can see, I’ve been jumping back and forth between Asia and Africa.

The Politic: What issues did you deal with the most across the board in all of your placements?

Not in every place, but in many of them, I dealt with recovery from war issues, [including] refugee issues. At one point, the first time I served in Thailand, I worked in the refugee unit at the Embassy in Bangkok and was very involved with Cambodian refugees going home to Cambodia. This was the early 1990s. Then, I also worked very closely with issues involving Burmese refugees. So this topic is something that, even if I do not work on it directly, I remain very interested in throughout all of my assignments. But then there’s the issue of how a nation recovers from devastating war — nation-building — and that is certainly an issue here in the Congo.

The Politic: Can you please describe the key elements of the partnership with the U.N. in the Congo?

The UN has the largest peacekeeping mission here in the Congo. Our relationship with them is very good, and we coordinate very closely with the U.N. peacekeeping operation. The U.S. pays 28 percent of all UN peacekeeping missions around the world, so clearly we’re very heavily invested. We try to handle a variety of reconstruction issues.

The Politic: What progress has been made dealing with conflict minerals in the Congo? What other foreign powers have been very active in recent years helping the Congo deal with its conflict mineral issues?

I think the Congo has a ways to go, but I think it’s headed in the right direction. As you know, Congo is one of the most mineral-rich nations of the world. Unfortunately, many of those are in conflict areas, and many become drivers of conflict as well as different groups seek to control those minerals. For those of you that know [the] Dodd Frank [Wall Street Reform and Consumer Protection Act], it had a clause about conflict minerals. Any country that wants to export minerals from the Congo or use them in their products has to have a clear history of transactions and show where the came from. I think we’re slowly getting there with transparent supply chains. There has been a war in the Congo in recent years, and the progress on conflict minerals has been slowed by that.

To address your question about other nations, the Congo was once a Belgian colony, so they remain very active here and ties are still strong, [as is the case with] France, England, and the U.S. China is a huge investor here. Increasingly, with the end of Apartheid in South Africa, we are seeing growing South African [influence] throughout Africa, and that’s certainly the case here in the Congo.

The Politic: Do you see foreign powers’ activity sometimes causing increased conflict in any contexts or settings?

Most countries want clear, documentable sourcing processes and documents for minerals, and I think that is all for the better.

The Politic: Have you encountered challenges as a representative of the United States in the Congo?

I have loved every minute of it. Generally, Americans are loved here in the Congo. I think it goes back to two things. Over the years, there were extended networks of American missionaries. Also, into the 1970s and the 1980s, one of our largest Peace Corps programs in the world was here. Now, unfortunately, both of those are no longer here — the Peace Corps has been closed for a long time, and the missionary network is not as extensive as it once was. But I think both of those are big factors in the general goodwill toward Americans here. But I have had very good experience. It is clear here that we are interested in helping nations rebuild after wars.

The Politic: How are emergency response infrastructures in the Congo?

Most humanitarian efforts are addressing crises created by violent conflict. I think it works pretty well, but in general, around the world, I think that bodies like the UN are getting better at addressing issues like those quickly and effectively.

The Politic: What have you observed about corruption in the Congo?

Corruption is a huge challenge here. The Prime Minister talks about it in the open. It is a big challenge for foreign investors. But I have seen the nation moving in the right direction. The Congolese people talk about it openly and recognize that it threatens their quality of government. I think that the ground-up discussion here on corruption is beginning, and I think it is great.

The Politic: Have you seen any policy-based efforts over the past ten years to reduce corruption?

The Prime Minister has put in place a few policies to increase transparency. He talks about it openly, which helps, but I definitely think the nation is moving in the right direction.

The Politic: Are there any other policy solutions that you would like to see come into place in an effort to quell conflict mineral problems?

I am not sure if you are aware, but there’s a new UN Special Envoy in this area. With the UN and a military quest (there is a new agreement that all the countries of the Great Lakes signed recently), I think we’re going into a unique time here, where the countries of the region — Congo, Rwanda, Uganda, etc. — realize that conflict in the Congo does not benefit anyone. They need to sit down and figure this out once and for all. How do you put these armed groups into the jungle and have them go back to peaceful civilian lives? We have been working on these issues for decades, but I think we are at a unique moment right now.

The Politic: Have you seen increased interest in the Congo in the rising generation of Foreign Service Officers?

I am very impressed by all the rising Foreign Officers. I am struck by how much public interest and knowledge of issues in Africa has grown since I first came to Africa. All over the country, flip on the TV, and they are talking about the latest development in Africa. Awareness seems to have increased since I have come home.

The Politic: Do you have anything to tell young, rising Foreign Service Officers?

It is a wonderful career — come in and try it. If you like it, and the Foreign Service likes you, it is a great way to gain exposure to the rest of the world. I tend to think that we, in the Foreign Service, are the luckiest in the world. There is nothing better than representing your country abroad in a variety of countries and cultures.

Embassy of the United States to the Democratic Republic of Congo: http://kinshasa.usembassy.gov

Alessandra Powell is a contributor to The Politic from New York, New York. Contact her at alessandra.powell@yale.edu. View more posts