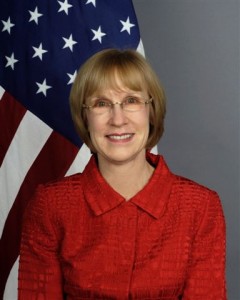 Jeanine Jackson is a career member of the Senior Foreign Service and has been the ambassador to Malawi since 2011. Prior to serving in Malawi, Jackson was the Minister Counselor for Management at the U.S. Embassy in Baghdad. During that time, she facilitated the transition from a military-oriented U.S. presence to a more civilian-oriented U.S. presence. Jackson earned the Secretary of State’s Distinguished Honor Award for these efforts. Jackson has also served as the Ambassador to Burkina Faso (2006-2009), a Colonel of the U.S. Army reserve, and in a variety of other diplomatic posts in Asia, Africa, the Middle East, and Europe.

I joined to serve the United States, to seek unusual challenges and to promote mutual understanding between Americans and other citizens of the world.

The Politic: You’ve served as a diplomat in countries such as Kenya and Afghanistan. What do you do to learn about a country in order to prepare yourself for a diplomatic position?

Preparing for assignments involves studying the nuances of a country’s culture (which could include multiple ethnic groups), the role of women, the things that make people tick, why a given country has not developed quickly, and the behaviors that positively and negatively affect a country’s progress.  And of course the political, economic and cultural history is extremely important.

The Politic: In the latest development of a territorial dispute between Malawi and Tanzania, which involves disagreement over the division of the northern part of Lake Malawi, Malawi has recently protested Tanzania’s plans to deploy ships on the lake.  Can you please talk about why Malawi sees this as a threat to the mediation process? Is there a particular resolution for the border dispute that you see as being optimal?

Malawi and Tanzania have both committed to mediation and a peaceful resolution of the lake border dispute.  While each have strong arguments, most of the inhabitants of the lake region do not understand why there is a disagreement as they all get along well, intermarry, trade and fish.  The respective governments may occasionally “saber rattle,” but both fully understand that, as members of the international community, they must pursue a peaceful resolution.  Should the current negotiation being led by Southern Africa Development Community former heads of state not resolve the issue, the matter may be referred to the International Court of Justice.

President Banda enacted a series of painful but necessary economic reforms to restore macroeconomic stability.  She developed an austerity budget, devalued and floated Malawi’s currency, and entered into a $156 million IMF program in July 2012.  Key development partners resumed most budget support shortly thereafter. The U.S. Government’s Millennium Challenge Corporation (MCC), which had suspended the $350 million energy sector compact due to concerns about poor governance under the prior president, reinstated the compact in June 2012.  These moves ended the acute shortages of imported goods (including fuel) that had extended over two years.   The reserve bank cleared the country’s arrears and built up foreign exchange reserves.  Over a period of many months, Malawians experienced high interest rates and inflation and an extremely low currency exchange rate, while the austerity budget reduced the availability of some services.  This caused great unhappiness, and civil society organizations called for demonstrations and other measures.

However, because the Banda administration did not veer away from its commitment to reforms, and although much remains to be done to address barriers to investment, Malawi’s economy shows some signs of recovery.

President Banda prioritized five sectors for trade and investment and is making some progress.  1) Agriculture (Malawi was recently selected as a member of the G8 New Alliance for Food Security and Nutrition); 2) Energy (the MCC compact has stimulated private sector investment but the energy sector laws and regulations require significant adjustment to bring this to fruition; 3) Mining (while there is some interest beyond the current uranium mine, the government needs better laws and processes to attract investment); 4) Tourism (a lot of potential but a long way to go to maximize it); 5)  Infrastructure.

The Government has passed a number of new laws that would help attract investment and trade and has established a one-stop-shop for investors.  The dynamic Minister of Trade and Industry is the most positive development in this area, but the biggest obstacle is lack of coordination and buy-in from all other government organizations that have a role to play in improving the economy.

The Politic: Malawi recently passed a series of economic reforms, such as a reduction of subsidies on commodities, at the behest of the IMF in order to attract foreign investments. Civil servants, teachers, and school children organized protests against the resulting price hikes for goods such as food and fuel. The demonstrations ended when the government agreed to raise salaries by 61 percent for civil servants receiving the lowest wages. Yet, citizens are still disgruntled. What is the US’s position on this controversy? What do you/the U.S. think of the raising of the salaries?

Malawi was sliding into an economic abyss when President Banda took power.  She warned that the price of reform and recovery would be hardship.  She took a 30% cut in her own salary to share the pain.  Political demonstrations have been a democratic response to those anticipated hardships, but without them the country would be suffering even greater hardship now.

The economic reforms undertaken, while in many cases painful in the short-term, are seen as necessary to restore the economy to a solid footing and promote a longer-term growth strategy.  The impact of the reforms on Malawi’s citizens is already being mitigated by recent month-on-month decreases in inflation, appreciation and stabilization of the currency, and lower prices on key imported commodities.  Previous governments in Malawi sacrificed sound monetary and fiscal policy to unsustainable strategies intended to win public support.  The steps taken by the Banda administration reflect a longer-term point-of-view and a greater appreciation of economic complexities.

The Politic: Corruption and neo-patrimonialism have hindered Malawi’s economic recovery. How can Malawi develop a culture that looks down on such practices? Is there anything the US can do to discourage corruption?

Development partners including the U.S. regularly call on Malawians to tackle corruption at all levels and in all sectors.  The U.S. funded the establishment of a government anti-fraud unit and continues to build its capacity.  Partners have pressed the government to appoint leaders who have a clean record and who can make progress in reducing government corruption, and to include the Director of the Anti-Corruption Bureau, the Auditor General, the Attorney General, the Director of the Central Medical Stores and others.  The U.S. has conducted anti-corruption training at various levels and is now focusing on training of police (both technical skills and ethical/anti-corruption training).  The GOM recently agreed to become a part of the Open Government Partnership and has also been working with the U.S.-based World Justice Project to improve its relative rankings in a variety of governance related areas, including corruption.

The Politic: Earlier this year the Malawian Parliament passed a Gender Equality Bill in response to discrimination against women in economic, social, and political environments. Can you explain how gender discrimination persists among Malawians despite the fact that their President, Joyce Banda, is a woman? Does she face prejudice in performing her duties as President?

President Banda has a long history of activism in support of women’s rights and has, herself, overcome obstacles that would have stopped many women in their tracks, including an abusive marriage.   Her courage in challenging gender stereotypes and a male-dominated political system has provided an example for all Malawian women on the power of determination.  Malawi remains a country where women are expected to fill highly traditional roles as mothers and homemakers, and many in the political establishment still try to exclude women from meaningful roles in public life.  President Banda continues to promote women’s leadership and recognition of the role women can and should play in developing the nation. I note that there is a greater percentage of women in the Malawian Parliament than in the U.S. congress.  And we have observed a growing cadre of young women leaders in government, civil society, private sector and social services who are paving the way for a greater role in Malawi’s future.    The U.S. promotes health, education and economic empowerment of women in every aspect of its development assistance.

The Politic: In the 1990s Malawi made a successful transition from authoritarianism to democracy and has remained a democracy ever since. This is fairly significant given that numerous countries have tried and failed to establish a democracy. What do you think it is about Malawi that has allowed the country to maintain its democratic practices for so long?

Democratization is for all countries a journey replete with imperfections, setbacks, and successes.   Malawi is still on that path.  I expect that Malawi’s 2014 national, regional, and local elections will indicate another milestone towards its destination.

The Politic: You also served as the ambassador to Burkina Faso from 2006 to 2009. Have there been any surprising similarities or differences between your experience serving there and your current involvement in Malawi?

Every country is distinct, so I hesitate to draw comparisons between any two African nations.

The Politic: Is there one experience, person, or event in the Malawi that has greatly influenced one or more of your policies? How so?

Yes — when President Joyce Banda ascended to the Presidency in April 2012 upon the sudden death of President Bingu wa Mutharika. Prior to that the U.S. Government’s support was waning, and most development partners had stopped their support.  Her constitutional succession, backed by Malawi’s military and judiciary, was an important test of Malawi’s young democracy and gave the U.S. confidence that Malawi is a good place to invest…but we wanted to do it smartly.  The new President’s vision dovetailed with USAID’s new strategy called “USAID Forward,” which emphasizes capacity building at the community, district and national level rather than simply providing aid and emergency response.  Our goals are now laser focused on a results-oriented approach to build capacity in health, education, economic growth, agriculture, environment and security.  As a result of the many Banda-initiated reforms, we believe that our goals and those of the GOM can result in more progress than in the past.

It is my opinion that the U.S. Government’s interagency presence overseas and the diplomatic community (i.e., State Department and all other USG agencies which have or could have influential and transformative programs abroad), are inadequately funded, which will result in reduced U.S. influence in the years to come.

Programs are underfunded and, in particular, opportunities for foreign students to study in the U.S. (funded by the USG) are miniscule compared to many years ago.

This is what I believe is missing from our current foreign policy and budget. Everywhere I travel I encounter excellent leaders in the government and private sector who were beneficiaries of USG scholarships.  My successors will find that few government and private sector leaders will have studied in the U.S. but instead in China.  For every 300 scholarships offered by China, the USG provides about 30, this in Malawi alone.   While programs such as the Young African Leadership Initiative are a start, sending 500 Africans to the U.S. for six-week programs does not compare to some other nations’ governments sending tens of thousands for degree programs.

Embassy of the United State to Malawi: http://lilongwe.usembassy.gov/index.html