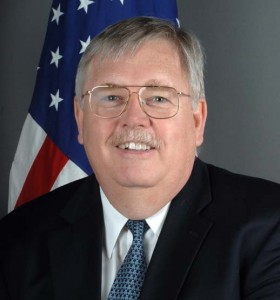 Ambassador John F. Tefft was confirmed by the U.S. Senate as U.S. Ambassador to Ukraine on November 20, 2009. He has been a career Foreign Service Officer for over forty years. Before assuming his current position, Tefft served as Ambassador to Georgia and as the Deputy Assistant Secretary of State for European and Eurasian Affairs and was responsible for U.S. relations with Russia, Ukraine, Belarus and Moldova. From 2003 to 2004, Tefft was the International Affairs Advisor at the National War College in Washington, D.C. Tefft served as the U.S. Ambassador to Lithuania from 2000 to 2003. He was Deputy Chief of Mission at the U.S. Embassy in Moscow from 1996 to 1999, and was Charge d’Affaires from November 1996 to September 1997. His other Foreign Service assignments include Jerusalem, Budapest and Rome. Tefft holds a Bachelor’s Degree from Marquette University in Milwaukee, Wisconsin and a Master’s Degree from Georgetown University in Washington, D.C.

The Politic: How long have you been Ambassador to Ukraine?

I have been here since November of 2009. Postings are usually three years, but my Senate confirmation process took a little longer, as things sometimes go in Washington, and the State Department decided to keep me in Ukraine for 3.5 years instead of a shorter 2.5 years. I will be leaving at the end of July; my replacement will arrive shortly thereafter.

The Politic: Why did you join the Foreign Service? What did you like about it?

Well, coming out of college, the possibility of traveling overseas was really appealing. I was also drawn, of course, to the opportunity to practice foreign policy. It just seemed like a great opportunity. I have been Ambassador to three different countries — Lithuania, Georgia, and Ukraine — and have served in multiple other assignments all over the world. My specialties are in Eastern European affairs as well as political-military issues. It is hard to pick a favorite assignment, but I particularly enjoyed my posting in Italy in the late 1980s where I was political-military counselor at our Embassy. My children were young at the time, and traveling around Italy was a great opportunity for the whole family. I worked extensively on arms control from 1983 to 1986. I had the opportunity to exercise my interest in political-military issues as a member of the American delegation for the START treaty.

I also particularly enjoyed my time in Moscow. I arrived in July 1996, and worked as the Deputy Chief of Mission until November 1996 when Ambassador Pickering finished his assignment. I served as the acting number one in Moscow for about ten months, until the next Ambassador arrived. Over my 42 years in the Foreign Service, I have learned six different languages: Hebrew, Hungarian, Italian, Lithuanian, Russian, and French. I have also studied a bit of Georgian and Ukrainian.  Some of those are pretty difficult languages and, at this point, they sometimes run together. My wife likes to jokingly point out that I am starting to forget English.

The Politic: What are the relationships between average American and Ukrainian citizens? What have you done to encourage these ties?

People in Ukraine and the United States understand each other much better today than ever before, a shift that began with the fall of the Soviet Union. Travel between the two countries plays a particularly important role — Soviet citizens were not allowed to travel freely and interact with outsiders. Since independence, tens of thousands of Ukrainian students have attended schools in the United States, from primary school and secondary school to university and advanced degree programs. Ukraine is host to the biggest Peace Corps program in the world. Volunteers live in hundreds of villages and cities teaching English, working with NGOs and schools, and helping local government. Also, Ukraine has started to attract many American travelers, especially Ukrainian Diaspora. If you go to cities in the Midwest like Cleveland, Chicago, or Milwaukee, you will undoubtedly meet Ukrainian immigrants or the children of Ukrainian immigrants. As Ambassador, I spend lots of time traveling all around the country with my staff — the country is about the size of Texas. We have met people from all over, and have fostered many positive interactions.

The Politic: What is your view of EU-Ukraine relations and how they relate to Ukraine-Russian relations?

When the Soviet Union fell in 1991, the United States strongly supported Ukrainian sovereignty, independence, and territorial integrity. We strongly opposed the reconstitution of the USSR, and have fostered democracy building efforts in Ukraine ever since. Ukraine belongs in Europe and we strongly support EU integration. We have made it clear to our European allies that we support Ukraine signing the Association Agreement with the European Union. There are still six or seven conditions which must be met before the EU will accept Ukraine. For instance, Ukraine must cease selective prosecutions and release [Yulia] Tymoshenko, as well as undergo prosecutorial and judicial reform. We have hopes that Ukraine will soon be an associate member of the EU and one day gain full membership. While EU membership for Ukraine is certainly not a short-term proposition, Ukrainian integration into Europe is essential. Ukraine has always been an integral part of European history, from the ancient times of the Greeks and Romans until now. The United States believes that Ukraine should have a good relationship with Russia — an EU Association Agreement will not and should not change that. However, because of customs and trade laws and regulations Ukraine can’t be a part of both the Russian customs union and have an EU Association Agreement.

The Politic: What is the role of the United States in promoting business in Ukraine?

One of the primary objectives of my tenure as Ambassador to Ukraine has been to help American businesses succeed. There is substantial corruption and a lack of true economic rule of law which must be addressed prior to Ukraine’s acceptance as an Associate Member of the EU. For instance, both Ukrainian and American companies alike face dangers of overtaxing and excessive customs duties from corrupt officials. Raider attacks, in which judges are bribed to agree to provisions in court that unscrupulously transfer ownership, are unfortunately common. Ukraine needs to ensure equal application of the law. However, some small steps have been taken to open up the Ukrainian market to foreign investors, as evidenced by the energy sector.

The Ukrainian government recently decided to open its energy resources to private foreign exploration. The contract with Shell for exploration of shale gas in Eastern Ukraine has been signed. A contract with Chevron for exploration of shale gas in Western Ukraine is now being reviewed by the local government councils. The government is in the final stages of negotiations with Exxon Mobil for offshore energy development in the Black Sea, where they have already discovered natural gas reserves in Romanian waters. Although there is some environmental opposition to shale gas development, I believe a carefully regulated regime can ensure environmental safety. These big firms, the three companies I mentioned, will bring the newest and best technologies — environmentally safe technologies — to Ukraine. These agreements have the potential to change Ukraine’s future.

The Politic: What is the state of Ukrainian democracy today?

I have spent the better part of 22 years, off and on, working on Ukrainian issues. There have been lots of changes for the better, but much work still needs to be done. There is still substantial corruption in the country, particularly in the judicial system. There is not a political culture that accepts the rule of law — a system where everyone agrees to play by the same rules. Businesses face many dangers operating in Ukraine. There are still several outstanding issues relating to reforms which are preventing the European Union from approving an Association Agreement with Ukraine. However, Ukrainians can also be proud of what they have accomplished since independence. Ukraine has a vibrant civil society working towards a more prosperous country, pushing the government to be more open and transparent, and helping to protect the rights of all citizens. The fact that Ukrainians can freely and openly speak out is a testament to what is right in the country. We also applaud the President’s recent pardon of the former Interior Minister Yuriy Lutsenko. Although Ukrainian democracy and human rights are not ideal right now, we hope they continue to move down the right path in the long term.

The Politic: What, in your opinion, are perceptions of the United States abroad?

As I have traveled around Ukraine I have been met with tremendous warmth and hospitality. I think perceptions of the United States in Eastern Europe are extremely positive, and I think that’s generally representative of much of the rest of the world. The United States has done much to support democracy in Ukraine, and our development programs are having significant positive impact. The interactions between American and Ukrainian citizens in travel and education are helping reinforce that positive image. I am a firm believer in people-to-people interaction. That is one of the reasons we are planning on opening a new American Center in Kyiv where Ukrainians can walk in off the street to learn more about U.S. culture, discover new English-language learning resources, find out how to study in the United States, and — hopefully — have the opportunity to chat with some Americans.

Embassy of the United States to Ukraine: http://ukraine.usembassy.gov