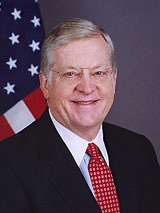 John Thomas “Tom” Schieffer served as the U.S. Ambassador to Japan from 2005 to 2009 and as U.S. Ambassador to Australia from 2001 to 2005. Schieffer was born in Fort Worth, and attended the University of Texas at Austin, where he received a B.A. degree in 1970 and a master’s degree in international relations in 1972. At age 24, Shieffer was elected as a Democrat to the Texas House of Representatives. After three terms, Shieffer attended the University of Texas Law School and become a corporate lawyer in Fort Worth. Schieffer has since served on the boards of numerous educational organizations and filled leadership positions in various political campaigns. In 1990 Schieffer negotiated a public-private partnership between the Texas Rangers Baseball Club and the City of Arlington and in 1991 was named President of the Rangers, a position he held until 1999.

For decades, the United States and Japan have expressed a desire for an equal partnership in their alliance. While both sides are sincere in expressing their desires, the reality is that there is an inherent inequality in the relationship today because the United States is required to come to the aid of Japan if it is attacked but Japan is not required to come to the aid of the United States in a similar circumstance. That has never particularly bothered Americans in the past but the technological changes that have occurred in warfare could make it a problem in the future.

For instance, during the height of the Cold War, the U.S. response to a possible Soviet missile attack would come quickly from U.S.-only assets. They might be based abroad but they were primarily American only weapons. The Japanese didn’t have or need the kind of weapons that would be used.

Today, that is no longer the case. The Japanese are the biggest partner we have in missile defense. They control assets that could knock down missiles headed for the United States. That is where the inequality of the treaty obligations could come into play.

Imagine the response of the American people to this scenario: a missile is launched from the Asian mainland and a Japanese destroyer could shoot it down. Under the present interpretation of the Japanese Constitution, that Japanese destroyer could not fire on that missile unless it was headed to Japan. If that missile got through and hit American soil, the American people would find it difficult to understand why we had an alliance that couldn’t help us in those kinds of circumstances. That is why many of us who care deeply about the U.S.-Japan Alliance would welcome a reinterpretation of the Japanese Constitution to allow collective self-defense. Such a reinterpretation would not require amending the present document.

The Politic: Would revisions to Article 9 of Japan’s constitution improve Japan’s ability to respond to military crisis?

Amending the Constitution would allow Japan to project military power abroad much more easily than today, but I am not sure it would make much difference in a self-defense situation since Japan has a very capable, well trained and ready self-defense force already in place.

The Politic: Would revisions to Article 9 help Japan to fulfill its military responsibilities in the context of the equal bilateral partnership desired?

It could make it easier but its greatest impact in my mind would likely occur in Japan’s ability to participate in coalitions with other countries to maintain the international order.

The Politic: How do U.S. policymakers view proposed changes to Article 9?

Most American leaders are prepared to leave the question of constitutional revision up to the Japanese people but most would also like to see Japan reinterpret its Constitution to allow for collective self-defense.

The Politic: How do U.S. policymakers view the possibility of Japan investing more resources to strengthen its armed forces?

For decades American Administrations of both parties have urged the Japanese to contribute more resources to their own defense. The Japanese have habitually spent less than 1 percent of their Gross Domestic Product on the military. That is woefully low compared to other developed countries around the world. The Japanese need to spend more to increase their ability to be a force for good in the world and I hope they do.

The Politic: What are the obstacles to Japan reinterpreting the Japanese Constitution to allow collective self-defense?

Reinterpreting the Constitution is much easier than amending it, because all it requires is a Cabinet vote. Over the years many Americans have forgotten that a Japanese Cabinet, not a Court, interpreted the Constitution to mean that Japan could not participate in what came to be known as collective self defense. A Japanese Cabinet could therefore change the rules of engagement for Japanese Self Defense forces as to what constitutes self defense or self defensive measures that could be taken in concert with an ally that comes under attack. To me, that is very different than projecting military power abroad which is what I believe the Constitution was trying to speak to.

The Politic: Do you have an opinion on perceptions that Prime Minister Shinzō Abe has a “revisionist” view of history?

Prime Minister Abe is a thoughtful, responsible person. I think he sincerely believes that Japan should take responsibility for the tragedy of World War II in Asia. At the same time he yearns for the day when Japan can again be treated as a “normal” nation. I don’t have a problem with that because I believe Japan has been a model citizen of the international community for decades. My advice to others who do object to that approach is to follow the pattern established by the United States and Japan so many years ago. Look to the future where we can, together, make a better world rather than the past where war brought heartache and tragedy to millions on both sides of the Pacific.

Embassy of the United States to Japan: http://japan.usembassy.gov/