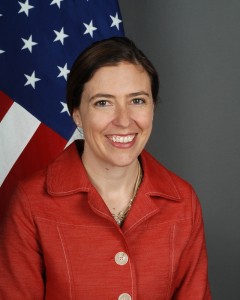 Michelle Gavin has been serving as the United States Ambassador to the Republic of Botswana since June 2011. Prior to her 2011 confirmation by the Senate, Gavin served as Special Assistant to President Obama and Senior Director for Africa on the National Security Staff. Before joining the Obama Administration, she was an Adjunct Fellow for Africa, and an International Affairs Fellow at the Council on Foreign Relations. Gavin has also served as legislative director to U.S. Senator Ken Salazar (D-CO), spent six years serving as the primary foreign policy adviser to Senator Russ Feingold (D-WI), and has served as the staff director of the Senate Foreign Relations Committee’s Subcommittee on African Affairs. Gavin earned a Masters of Philosophy in International Relations from Oxford University, where she was a Rhodes Scholar; and a Bachelor of Arts from Georgetown University’s School of Foreign Service.

The Politic: Why did you join the Foreign Service? As a political appointee why did you take this position?

The Politic: How would you describe your job as a U.S. Ambassador to a general audience?

My job is definitely multifaceted. It is to manage a fairly large organization, to promote U.S. interests here in Botswana, to be an acceptable and public representation of the United States and the United States government, and to try and generate faith and good will. My job is different every single day that I do it, which is one of the most appealing things about it

The Politic: You have worked in several roles before recently joining the Foreign Service, as advisor to U.S. Senators on foreign affairs, a fellow at the Council on Foreign Relations, and Special Assistant to President Obama and Senior Director for Africa on the National Security Staff, among other positions. How have you adjusted in shifting to a very different role as ambassador, and how have your past experiences shaped how you carry out your work today?

It is a very different role — a much more public facing role. My previous jobs in government at least have been staff jobs, including what I think of as the ultimate staff job, staffing the president. This is a very different experience. At the start, one of the hardest things for me was to resist the impulse to run away every time I saw a camera and try to not be in the shot, because I was supposed to be in the shot; that was the point. That has definitely been a big adjustment, but I think that all of those jobs actually were great preparation for this one. I’ve had the great privilege of working with a lot of Career Foreign Service Officers through their confirmation processes in my time at the White House and elsewhere. I’ve been able to gain a pretty broad network of currently serving and retired ambassadors. That has been a tremendous resource for me as I try to navigate this very different role.

The Politic: The U.S. has seen Botswana as a model for stability in Africa and a valuable partner. How do you nurture this relationship and leverage it to create a positive influence on other countries in the region?

You are absolutely right. Botswana has been one of our most reliable partners on the continent for several decades and it is a remarkable place with a truly singular development trajectory. One of the challenges for us then is to not sit in complacency and praise Botswana — rightly so — and do nothing else. This is because there are a number of challenges confronting this very valuable partnership. One of the most important things is to acknowledge what is valuable and stable and incredibly admirable about this place and use that to motivate ourselves to engage on issues that are confronting the country. [That includes] everything from the still extraordinarily high HIV prevalence rate — it has the second highest prevalence rate in the world — to the challenge of economic diversification, which is very real here, to an economic future that is not dependent on diamonds.

The other piece is that because it is generally such a good relationship, and because Botswana is such a great performer, we have an opportunity here to do work together that is greater than the sum of the bilateral relationship. For example we do health-related research here that has ramifications for people all over the world. It helps Canada and Malaysia and it’s not just about Botswana and the U.S. We host an international law enforcement academy that trains law enforcement professionals from 34 different Sub-Saharan countries. Law enforcement capacity is getting better and international cooperation in the region is getting better in terms of combating transnational crime. This is because of work that Botswana and the U.S. are doing together. So this is a great platform to do something with a larger vision than the just the bilateral relationship.

The Politic: The U.S. has made extensive efforts to aid in development in Botswana, whether through USAID partnerships, Peace Corps, the CDC, etc. How have U.S. efforts achieved or not yet achieved improvement thus far, and how have they been perceived locally in Botswana?

I don’t know that the U.S. can take credit for all the development gains, as it all depends on areas where foreign assistance played a large role and those in which did it not. Certainly, it is undeniable that from independence in 1956 to where it is today, Botswana’s trajectory has been remarkable. They were at the bottom of nearly every development index, and today they are in fact so successful that they do not actually qualify for a lot of development assistance that the U.S. provides to other places. The country is too wealthy for general USAID mission, so in some ways it is a victim of its own success. There still is a USAID presence working on environmental and health issues, and we have quite a large Peace Corps presence. We think of our work often in a development context, particularly our economic diversification work. This is a different challenge and we have to flex different intellectual muscles here than we do with more traditional developmental partners, because Botswana has graduated out of that.

The Politic: Botswana’s economy remains heavily focused on diamonds and other precious stones and metals. Given that this is not sustainable in the long run, how should the U.S. and Botswana work together to approach economic development in the coming years?

It takes developing the new engines of growth for this economy going forward. Botswana has a job-creation challenge coming up in addition to the question of what will be the new driver of the economy so it’s not all about diamonds anymore. They have had some success. For example, the tourism sector is an increasingly significant income generator for the country, but there will have to be multiple engines of growth. We need to do a better job of attracting U.S. investors here that can partner with locals to help drive the economy forward and take advantage of Botswana’s central location in the Southern African region.

Botswana itself is quite a small market — a two million person country — but one can think about it as situated as a hub in the Southern African development community. We can help bring more of our own private sector to get involved and work with the government of Botswana on some regulatory reforms that can improve, for example, prospects of those who wish to trade across borders and improve Botswana’s capacity to function as a hub in the region. In fact, one of the ways in which we have a useful presence here is in the Southern African Trade Hub, which is a regionally focused entity that actually sits here in Gaborone and tries to improve regional trade flows. This is a good thing for all of Southern Africa, but a particularly good thing for Botswana.

The Politic: It has been noted that Botswana has been supportive of human rights around the world, yet you’ve spoken on the pervasive issue of gender-based violence. What do you think is at the core of this problem in Botswana, and why does it continue to persist given Botswana’s values? How do you think U.S. should approach this? 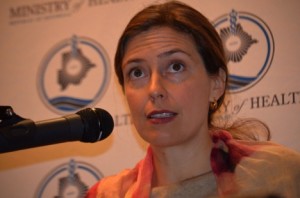 I wish I understood why Botswana, in so many demonstrable ways, really values rule of law, and the dignity of individuals. I wish I understood why it is, in many ways, a very gentle society, yet why the problem of gender-based violence is of the significance and scope and scale that it is. I don’t pretend to know, but in terms of trying to figure out the solution, I think it absolutely starts by surfacing the problem and getting people comfortable to talk about what is happening. Obviously there are different elements to it, but we must get people comfortable with acknowledging the costs. It is not just the costs to the individuals who are victims of gender-based crimes and sex crimes, but also the way this stands to obstruct a lot of the work that people are doing on sexually transmitted diseases — particularly HIV — and how this stands in the way of Botswana being able to develop its potential to drive the economy forward. I think this conversation is an important first step.

Another piece we are working on together with the government of Botswana is trying to talk about how to create the right kinds of referral networks so that when these things do occur, victims aren’t left to fend for themselves. That could mean finding psychosocial support in one place, legal support in another, medical support in another, and social services elsewhere. There needs to be a referral network that is capable and nimble from the first point (of reporting this kind of crime) that can be triggered into action so that there is accountability and appropriate support for those who are victimized. That is something we have been working with the government on, and I am hopeful we’ll see some results.

The Politic: Is there one experience, person, or event in Botswana that has greatly influenced one or more of your policies? How so?

It is hard to single just one out. It is such a remarkable place, full of absolutely extraordinary people. But my determination to get more involved on gender-based violence issues really concerns listening to young people in this country. I am particularly referring to young girls who are so incredibly gifted and have so much to offer, but in many cases, feel tremendous pressure from adults who engage in sexual relationships or transactional types of sexual relationships. They really need more advocates and more support. Definitely, there were some obvious priorities for the mission before I got here — the work on HIV and the work on economic diversification. There are other priorities that have emerged since I’ve been on the ground and have been able to really talk about with people, and that is clearly one of them.

I think that where people have the most contact with America here is probably with the Peace Corps volunteers. Most people in the United States would feel incredibly proud of the way they are being represented. Our Peace Corps volunteers across the country are extraordinary and really are parts of their communities. They are real community members with a great deal to offer. This is [something] that I think most Americans very much recognize as being a part of our national character. They are friendly and they are willing to do hard work. I think more than anything else, they are our best ambassadors. I really do believe that taxpayers would feel incredibly proud of the work they do.

Embassy of the United States to Botswana: http://botswana.usembassy.gov/index.html