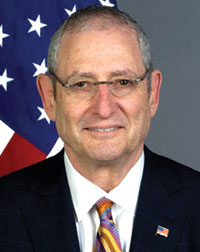 Robert A. Mandell was sworn in as the 21st Ambassador of the United States of America to the Grand Duchy of Luxembourg on October 25, 2011. Mandell formerly served on the President’s Export Council, where he was Vice Chairman of the Trade Promotion and Advocacy Subcommittee. Prior to this appointment, he was Chairman and CEO of Greater Properties Inc., and from 1998 until 2008 he was Chairman and Chief Executive Officer of The Greater Construction Corp. Mandell has also worked as Chairman of the State of Florida Environmental Regulation Commission, as a member of the Board of Directors of Florida Hospital, the Audit and Finance Committee of the Adventist Health System, the board of Sanford-Burnham Institute for Medical Research of LaJolla, the Vermont Studio Center, and the Central Florida Advisory Board of Orange Bank. He is a 1969 graduate of the University of Florida with a BS in Advertising and, in 1972, a JD degree. Mandell graduated from the Harvard Business School’s OPM Executive Program in 2000.

First off, the U.S. handles diplomatic representation abroad differently than many countries. Ambassadors are either career ambassadors or political appointees, and I happen to be a political appointee. I certainly believe in and support the mission of President Obama. I had a very long career in business in Florida, and I was a lawyer before I was in business. After working with the Obama campaign, I welcomed the opportunity to serve my country abroad. The mission of the State Department is to advance freedom for the benefit of the American people and help build and sustain a democratic, prosperous world composed of well-governed countries. It also tries to respond to the needs of the people and act responsibly within the international system. So why I joined is to serve our country, and it has been a remarkable pleasure.

The Politic: What motivated you to become involved with the federal government? You have been extensively involved with various organizations more local to Florida, acting as Chairman and CEO of Greater Properties Inc. of Central Florida and serving on the Board of Directors of Florida Hospital, among other organizations. Was there anything in particular that incited that career shift?

I had never worked on a presidential campaign before. And then I met President Obama back in early 2007 or late 2006, and I became a guy who believed in what he stood for and in who he was as a person. I served the president prior to becoming an Ambassador on the President’s Export Council, which consists of 20 CEOs from around the country. The CEOs were from mostly major companies — except for me and a couple of other folks — and [we worked] to help the United States double exports over a five year period, as [President Obama] had described in his State of the Union address in 2009. He pointed us toward the idea of checking what laws were hindering the United States’ businesses from operating abroad and what we could do about those hindrances to create better opportunities for the United States. As a result, we recommended that he endorse all of the free trade agreements that were then not signed — with Panama, Colombia, and South Korea. We had him do some other things that would enable businesses to more effectively export products, which obviously creates jobs for Americans. The idea of representing him abroad was a great opportunity for me, having never served our country in that respect.

Something that showed me how remarkable an opportunity serving our country has been for me is one of the things I got involved in with the State Department: seeing to visa opportunities for people coming as tourists — this was one of the real issues in Florida. As a result, we placed a focus on getting people visas more quickly and efficiently. I think that was actually done, and it has helped tourists in Florida, and certainly the rest of the United States, in a major way.

The Politic: Is there one experience, person, or event in your country that has greatly influenced one or more of your policies? How so?

Well, there’s more than one. There have been several advancements in my country that have just been tremendously enriching for me, the first one being when [former Dean of Yale Law School and Legal Advisor to the State Department] Harold Koh came over here shortly before I became an ambassador. We spent a couple of days with the European Court of Justice, after which I asked Chief Justice Roberts if I could host the United States Supreme Court in something we would call the Luxembourg Forum, where the entire United States Supreme Court would meet with the entire European Court of Justice. That was agreed to and will happen sometime in 2014 — the date is not available. And that is just a remarkable thing, especially for business, for the courts to be able to talk to each other about their policies and some of the other issues that are common to both courts. I think it is a really great opportunity for advancing the relationships between the European and the United States’ institutions at the highest level.

The other occurrence that was particularly influential to me was when I went to Afghanistan to visit the troops, because Luxembourg has a number of troops in Afghanistan. I was invited to meet with them, as well as several of the American troops in different parts of Afghanistan. It gave me insights I didn’t have before, and I had a great meeting with the Luxembourgish troops. It was one of those things that reminded me that every day really is a new day, and I try each day to do something that will benefit the thousands of Americans who live here, or the United States, in terms of our ability to export and work with the government of Luxembourg.

Well, the evolution of diplomacy is really fascinating. When it started, all ambassadors were political — Washington Irving, Frederick Douglass, Benjamin Franklin, and Thomas Jefferson, for example. They were all political appointees, not professional diplomats. The Foreign Service in the Department of State began in the early twentieth century, and diplomats today staff most of the posts abroad, frankly. The tradition of political ambassadors never ended, however, and today, United States ambassadors at many important posts are chosen outside of the ranks of the Foreign Service. Having served on the boards of banks and having been involved in business, I have found that my business background has been very helpful here in Luxembourg — this is a business country. There are three trillion dollars under asset management here in Luxembourg, from which arise all kinds of issues. I am familiar with many of them because I’ve seen them before and have a background assisting U.S. companies with them.

The opportunity that we have abroad is, frankly, to project what’s best about America to the rest of the world. In that regard, one of the things we do here is give out Fulbright Scholarships in order to have members of the Luxembourgish community receive scholarships to go to the United States to study. There are many, many famous Luxembourgish people who have availed themselves of that opportunity — the finance minister here and CEOs of several of the biggest companies in the country… So, through various programs and multicultural events, the United States is given the opportunity to say who we are. For example, last week I hosted an Interfaith IFTAR Dinner. Essentially, the Shura of the Muslim community here in Luxembourg came to my house, and at sunset — which in Luxembourg was about ten o’clock — they had prayers and then we had a breakfast, for lack of a better way to describe it, where we had traditional Muslim foods. They hosted a prayer session for the Shura, and the Imam came. So what we do is try to create the multicultural aspects of what’s best about America.

The Politic: Can you comment on what you are currently working on? Are there any new initiatives you can mention?

Well, nothing ever stops. I’m currently working on the Luxembourg Forum — that’s the Supreme Court meeting with the judges of the European Court of Justice — which is the most important thing to come here in a while. I am also currently working on some of the issues surrounding the government’s regulation of banks. Some assets in foreign transactions of Americans in foreign countries affect the banks and American citizens here.

The Politic: How did the recent spy scandal surrounding Prime Minister Jean-Claude Juncker impact the American embassy, if at all?

The Politic: Can you describe generally what it is like working with the government in Luxembourg from the perspective of the Foreign Service?

The government of Luxembourg is in many respects a great friend of the United States. Luxembourg had been annexed by Germany in 1940, meaning it didn’t just get occupied, but became German, and people here were made German citizens against their will. So in 1944, when the United States army had liberated Luxembourg, the Germans’ kind of last end was the Battle of the Bulge in December, where there were 350,000 Germans against our 100,000 troops here. With a lot of luck, planning, and loss of life, the Americans withstood the Germans and returned Luxembourg to the Luxembourgers. The Battle of the Bulge had 140,000 casualties, which was a large sum and happened right here. That’s still remembered here. That’s still a part of the fabric of Luxembourg.

One of the things that I have done is speak in every single high school in the country. I’ve met with their senior classes — and some of these sessions I’ve had to do in French, which was a little difficult for me — and talked to them about the United States in terms of culture, values, and education system, as well as the history between our two countries. So the relationship between the United States and Luxembourg has been one of support, one of a really strong connection. I feel really good about the bilateral relationship.

Embassy of the United States to Luxembourg: http://luxembourg.usembassy.gov/index.html