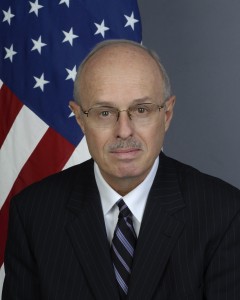 Robert E. Whitehead was confirmed as the Ambassador to Togo in 2012. Whitehead has worked in the Foreign Service for over thirty years, and previously served as the Chargé d’Affaires in Khartoum, Sudan. He also worked in diplomatic missions to other countries, including Zimbabwe, Zambia, Romania, and Rwanda. Whitehead is fluent in French and Romanian and has received the Foreign Service’s Superior and Meritorious Honor Awards.

The Politic: What inspired you to join the Foreign Service?

Well, to be truly honest, I needed a job. I had been living overseas for several years as a volunteer, and then as a Fulbright lecturer working at the National University of Zaire. I had met a lot of embassy people [and] diplomats. It looked like an interesting job with travel, a lot of languages and things I wanted to do. I thought I would give it a shot (rather than academics) and went in not fully aware of the nature of what I would be doing.

The Politic: Could you describe what the job of ambassador entails?

There are a number of different aspects to the job. One is always the protection of U.S. citizens who are living abroad, as well as the protection of our interests. Beyond that, a lot of what we do is engaging Washington in policy debates as to the best way to approach a country. We attempt to help the country resolve its problems, to garner support for various U.S. positions and to explain our values, views and policies. There is another aspect, which is what I call waving the flag, where you go to a lot of openings, give speeches, attend a lot of events and become the face of the United States government in that country.

The Politic: What have been some of the challenges that you have experienced in your career in the Foreign Service?

I would say one of the real challenges in the evolving Foreign Service of today is the need to go abroad alone — without one’s family. We have seen this in [places like] Pakistan, Afghanistan, and Iraq, and it is a changed Foreign Service from when I went in.

The Politic: What is the proudest moment of your career?

That is pretty easy. It was in July of 2007 when I was Chief of Mission in Khartoum and I joined the delegation in Juba for the independence celebration of the separated South Sudan from North Sudan (when it became a sovereign country). I had been working the issue most of the time since 2004 in Khartoum and in Juba, and it was a great feeling to see that this had happened through democratic change. Despite the lingering problems, there was a strong prospect that fifty years of war and conflict had come to an end.

The Politic: This is a good point for us to transition into your experience in particular countries, so let us move to Togo, where you are currently serving. Over the past decades, especially since the death of President Gnassingbé Eyadéma, the turnover of political power has been marked by political and civil strife. However, the political situation recently seems to have stabilized and democratic procedures have been largely peaceful. What has been the role of the US in promoting peace, stability, and democracy?

My first connection to Togo was in 1990, at the time of the Declaration of Mitterrand, the fall of the Berlin Wall and the collapse of the Soviet Union, and when a lot of the proxies of the Cold War were let go. Western Africa was affected very much. For Togo, this translated to about fifteen years of instability, a lot of violence and a lot of political uncertainty. The trend line since 2005 has improved. It is far more peaceful, and we are seeing gains in democracy. We have worked very hard pushing looking for the compromises to allow political forces that had been at odds to work together to begin reflecting on long term development goals for the country — what the country can do to work for everyone. I think that to some degree we have been successful, and we continue to work with likeminded embassies to push this process ahead.

The Politic: In your experience, what kinds of exchange or community outreach programs have been able to engage parties and produce compromise?

When I look at exchanges, I emphasize three of them. The first, which is short-term, is called the International Visitors Program. This is a sort of work-study program where we bring people over and expose them for about a month to some thematic part of the U.S. It might be journalists going around the country; they might stop in Washington to speak with constitutional experts, talk to journalistic associations, and then going out to see how journalists and organizations function. We do this across the board — we just had a Supreme Court Justice a year ago — and it gives people a view of how we do things, our values and how they are translated.

Because I was a Fulbright at one time, I have a soft spot for the Fulbright exchange program. This third — and excellent — program is intellectually cross-fertilizing; it is something that I think we have done very well.

The Politic: Can you speak to one experience or person in the country in which you are serving that has greatly influenced one or more of your policies?

I cannot honestly say that in Togo I can isolate one thing. One person back in Washington who had a very strong influence on how I approached this was Johnnie Carson, the former Assistant Secretary of State. Johnnie made it very clear that we needed to hold the African countries to which we are ambassadors to a high standard — that they deserve this — and this has informed the way I go about doing my job here.

The Politic: I think that is very good advice, especially considering the growing emergence of Africa on both the political and economic stage. What other things has the U.S. done to engage these countries?

Togo is a small country surrounded by relatively small countries that share a common coast and common geography, so we have approached it regionally — we do not just deal with Togo in isolation. Economically, this means a lot of our development aid is focused on lowering regional barriers. We attempt to harmonize tariffs, to get a single set of document to allow anyone in West Africa to cross borders, to facilitate trade and to bolster the potential for growth regionally from which everyone will benefit.

We also have had to look at some of the challenges of security. Over the last year, we have seen the issue of piracy off of West African waters in the Gulf of Guinea. The number of incidents has actually exceeded those we see in the Horn of Africa and throughout Somalia. We have worked closely with the Togolese Coast Guard and the Navy, as well as with Togo’s neighbors so that they will share data, share resources and set up some sort of early warning network. After all, trade is extremely important for this region and extremely important to this country. These are probably the two biggest initiatives that we are working on right now.

The Politic: In your career you have served in countries with difficult political situations, namely Rwanda and Sudan, and you have worked closely with the United Nations. I was wondering if you were willing to speak about your experiences with the United Nations, particularly if there was some aspects of the UN that worked really well in those countries or if there things that did not work as well.

In most countries that I have been in, the United Nations has done pretty well in terms of what its specialized agencies do. Whether it is working with children or helping organizations, such as the food organization, they are well-staffed. There are obviously overarching concerns about efficiency and budgets, but those are handled out in New York and not out in the field. The one area in which I have seen the UN really challenged has been peacekeeping operations. They have grown in size, expense and complexity  — especially in Africa — and we have seen peacekeepers, which were at one time more or less sacrosanct, become the victims of attacks. They no longer have the exalted status they once did. It has been very challenging for the UN, and it is a work in progress. It is a very difficult issue.

The Politic: How do you feel that America is represented abroad, and are there any elements of American foreign policy that you would personally change?

I hate to say how old I am now, but Ronald Reagan signed my commission; when I became Ambassador, it was Barack Obama who signed my appointment. I can honestly say that in every administration that there have been things that I disagreed with and things that I would have done differently. I assume it will be this way until the day that I walk out the door.

As a career diplomat, there are certain expectations — you must voice the policies of the day and that you must more or less reflect what the administration’s policies are. Now, if you come to a point — and this has happened to some officers in their career — where you feel that you can no longer do this, then your choice is clear. You can always resign. Nonetheless, there is a certain discipline to this job, and you need to embrace that if you are to be an effective diplomat because we are not freelancers here; we are part of a larger organization.

The Politic: That has to be somewhat challenging. Have there been any instances in which you really did not agree with a policy, but you were compelled to carry it out that you would be willing to share?

I initially disagreed with our approach to Rwanda. However, the administration at the time, that of Bill Clinton, has since said that “it was the biggest mistake that took place while I was in office.” Clinton publicly acknowledged that our approach was not the right one. That would probably be the most salient one that I can recall.

The Politic: Ambassador Whitehead, it has really been an honor. I just want to thank you again for speaking with me.

Thank you, thank you. It was a great opportunity. Good luck with everything.

Embassy of the United States to Togo: http://togo.usembassy.gov

Arturo Schultz is a contributor to The Politic from Wayzata, Minnesota. Contact him at arturo.schultz@yale.edu. View more posts