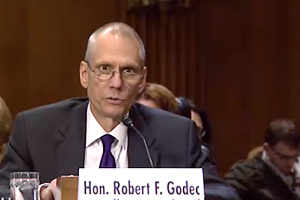 Robert F. Godec has served as U.S. Ambassador to Kenya since January 16, 2013.  Before serving in Nairobi, Godec was the Principal Deputy Assistant Secretary for the Bureau of Counterterrorism in the Department of State.  He served as the U.S. Ambassador to Tunisia from 2006 to 2009 and has also held positions in Iraq, such as Deputy Coordinator for the Transition in Iraq, as well as South Africa, Thailand and Burma.  Godec received a B.A. from the University of Virginia and an M.A. in International Relations at Yale University before joining the Foreign Service in 1985.  He has received a Presidential Meritorious Service Award and a Distinguished Honor Award, among others.

I joined the Foreign Service for many reasons.  Ever since I was very young, I have loved the challenges foreign policy and relations present with other countries.  The issues and questions are fascinating.  They are difficult and they are important for all of us.  We need good, strong relations with other countries — peaceful relations, good economic ties, and cultural links.  Helping to build these ties was something I always wanted to do and it motivated me to join the Foreign Service.  I also just enjoy having the opportunity to share with other people, whether they’re government officials, regular citizens or whomever, the views and the culture of America.  I learn from them as well — hear about their cultures, their ideas, their views of the world — and share ideas and work to build bridges and solve problems.

The Politic: What advice would you offer to students hoping to pursue a career in the Foreign Service?

There are a couple pieces of advice I would offer.  The first is that the best preparation for being in the Foreign Service is being broad in your interests, trying to understand the world, trying to understand politics, economics, cultural issues, social issues, and just about everything else.  It is important to talk to people, read, and be open to the world around you.  You should have a fascination with what is happening in other countries and in your own country.  These things are critically important and I think they provide a good foundation for a career in the Foreign Service.

The third thing is to keep an open mind about what you are embarking upon.  The Foreign Service is a wonderful career and a great place from which to serve the American people.  At the same time, there are lots of other ways to be involved internationally and lots of things you can do with your career, whether that is joining the Peace Corps or going into business to work abroad, or joining civil society.  And, frankly, if you don’t make it in immediately, I suggest you try these other pursuits — you might find that they are right for you. You might try again for the Foreign Service and get in on a second try.  We have many Foreign Service personnel who join later in life.

The Politic: I want to turn now to Kenya.  Is there one experience, person, or event in Kenya that has greatly influenced one or more of your policies?  How so?

I would not say there has been a specific experience, person, or event that has shaped my views here, although obviously there are plenty of experiences, people and events that have had a big impact.  To some degree my thoughts on Kenya are shaped by the fact that I served here earlier, from 1996 to 1999.  So I have been here for more than four years and I have seen big changes, important changes, from the first to the second time.  Broadly, I think Kenyans have made great progress.  Kenya has a strong constitution, one of the most progressive in Africa, a growing middle class, and more freedom of expression.  Democracy is stronger.  There are a number of areas in which this progress is clear.  And the relationship between the United States and Kenya is very strong.  In fifty years of partnership, we have worked together in many different areas and built a strong foundation.  As the new Ambassador here, I am looking for ways to further deepen our partnership.  That is what I am looking to do here.

The Politic: How, if at all, has U.S. policy toward Kenya changed or evolved between the Bush and Obama presidential administrations and in recent years?

Because Kenya has made progress, particularly in the political sphere on multiparty democracy and freedom of expression, it is easier for us to find ways to strengthen our partnership.  For example, our levels of economic assistance are higher than they were in the 1990s.  We’re providing more support and assistance for development and security, and in a variety of other areas, so the changes have helped us to strengthen our partnership.

The Politic: What is Kenya’s strategic role in the fight against terrorism?

Kenya is a key partner in our effort to defeat terrorism and combat the threat it poses around the world. We provide support and assistance to the Kenyans in a range of ways.  Kenya, for example, has troops in Somalia fighting against al-Shabaab under AMISOM.  We provide support to AMISOM and some direct support to the Kenyans as well.  They have taken big risks, they have lost soldiers in Somalia, and they are playing a key role in making progress in Somalia by fighting against Al-Shabaab.

Kenyans have also suffered greatly as a consequence of the threat from al-Qaeda. As you know, our Embassy in Nairobi and the Embassy in Dar es Salaam were bombed by al-Qaeda in 1998.  In fact, I was assigned to the Embassy here in Nairobi at the time.  Hundreds of Kenyans were killed, thousands were injured — many were Americans.  Both the Kenyan and American people suffered back in 1998.  The Kenyans have been a strong partner with us over the years in the fight against terrorism.

The Politic: Kenya’s newly elected president and deputy president both face charges by the International Criminal Court (ICC) of crimes against humanity for the 2007-08 Kenyan election crisis.  How has this affected American relations with Kenya?

The United States has a fifty-year partnership with Kenya and the United States fully accepts the sovereign decision of the Kenyan people to elect Uhuru Kenyatta and William Ruto as president and deputy president.  I met with President Kenyatta and Deputy President Ruto just before they were inaugurated and I presented to them a letter of congratulations from President Obama.  Let me emphasize that the United States wants to continue the strong partnership with the government and people of Kenya.  That said, the United States believes that following the rule of law, working through the justice system, and meeting international obligations are very important.  We have welcomed the commitment by President Kenyatta and Deputy President Ruto to uphold Kenya’s commitment to the ICC.  Kenya is signatory to the Rome Statute and it is important the government live up to it.  It is also important that the people who have suffered during the 2007-08 post-election violence receive justice and that there is accountability for what happened in the country. 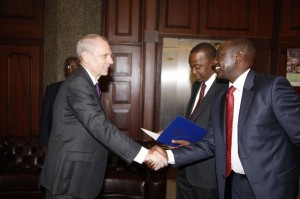 The Politic: What is your vision for Kenya and U.S.-Kenya relations in five years?

Kenya has a very good vision for its future. They have a policy goal they have set for themselves called Vision 2030, which aims to get Kenya into the position of being a middle-income country and to raise the standard of living for the people of Kenya.  It is an excellent set of goals and I think Kenya has moved strongly in the right direction in the past few years — moved toward realizing the goals of Vision 2030.

There is a lot that still needs to be done.  Kenya faces many challenges, including creating more jobs for its citizens and raising its GDP growth rate.  To do so, the government must take steps to improve governance and ensure students who come out of school have the right skill set.  Kenya’s infrastructure needs to be better, as well.  The government should continue efforts to modernize the port of Mombasa and to improve the roads and railroads.  To make progress, Kenya must meet these and other challenges.

As for the next five years, I see a continued partnership between the United States and Kenya across a wide range of issues, including security and economic development.  We are major contributors to economic development and I expect that will continue.  I also see a continued partnership to build trade and economic relations between our two countries.  More exchanges — student and cultural exchanges, for example – would also deepen the relationship.  And the United States will work with Kenya to help in the implementation of its new constitution and to advance reform.  Kenya adopted a very progressive constitution in 2010.  It is an important document and implementing it, for example devolving power from the central government to the new county structure, is critical for Kenya’s future.  We want to help.  Kenya’s new system is modeled to a degree after the American system, so it is an area in which we have some experience and can offer support.

I believe America is well represented abroad.  Obviously, the U.S. government, through the State Department and other agencies, has official representatives in countries around the world.  They have an important role to play and are working hard to get the job done.  We have a range of tasks.  In addition to officially representing the views of the U.S. government to the host government, we must reach out to everyone.  We need to communicate American ideas and values and to understand what the citizens of our host countries think about the United States.  And we have a responsibility to convey back the views of the host country, in my case Kenya, and to help build the bridge between our two countries.  I think we’re doing a good job. Obviously, there are always areas that could be improved, but I think we are succeeding.

I would like to add one other point.  In today’s world, it isn’t just diplomats who represent the United States.  The United States is represented by all of its citizens who are abroad, regardless of why they’re there.  One additional job of any Ambassador is to stay in touch with American citizens who are overseas.  Obviously, our first job is to help ensure their security.  We also need to look for ways to assist them if they need it.  But we should also work with them, when possible, to strengthen our relations with the host country.  In the end, the relationship between Kenya and the United States is not just between two governments.  It is between two peoples.  It is important that we engage all parts of American society in representing our country.

Embassy of the United States to Kenya: http://nairobi.usembassy.gov/index.html

Adira Levine is a staff writer for The Politic from Chicago, Illinois. Contact her at adira.levine@yale.edu. View more posts