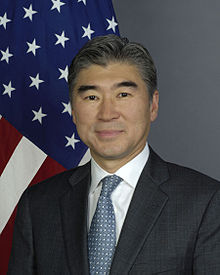 Ambassador Sung Kim was born in South Korea where his father worked as a diplomat for the South Korean government. An immigrant, Kim moved to Los Angeles when he was 13. After finishing graduate school, he worked as a public prosecutor for the LA County District Attorney before joining the State Department, where he has focused on East Asia and Pacific affairs. Working first in Washington as a Staff Assistant in the Bureau of East Asia and Pacific Affairs, Kim later served as the Chief of Political Military Affairs at the U.S. Embassy in Seoul and then as a Political Officer in Tokyo. In 2008, he took part in the Six-Party talks, which aimed to find a peaceful resolution to the concerns raised by the North Korea’s nascent nuclear-arms program, as a Special Envoy. In 2011, after a confirmation process stalled over discontent with U.S. policy towards North Korea, Kim was eventually confirmed by the Senate as Ambassador to South Korea.

I was attracted to the opportunity to represent the United States abroad and work on America’s foreign policy priorities and important foreign relations.  This is a tremendous privilege and I think perhaps even more special for an immigrant like myself.  I’ve had some difficult challenges in my diplomatic career but never once regretted my decision to join the Foreign Service.  It has been a fascinating and rewarding adventure; there is great gratification in working on issues and relations of consequence.

Prosecution and diplomacy may seem incompatible but when I crossed over from the Los Angeles County District Attorney’s Office to the State Department, for me there was one constant — commitment to public service.  Young Koreans and Americans often ask for career advice, and I always encourage them to explore different opportunities in public service including diplomacy.

The Politic: What are the greatest challenges of working in the Foreign Service?

While some issues and bilateral relationships may be easier than others, there’s no such thing as drive-through diplomacy.  Negotiations, in particular, can be protracted, even painful processes.  Often there seems to be a correlation between the level of difficulty and the importance of any issue.  For instance, the way forward on the North Korean nuclear issue may one of our greatest diplomatic challenges, but it is vital that we continue our efforts given what is at stake.  The importance of ensuring peace and stability on the Korean Peninsula and in the Asia-Pacific region cannot be overstated.

On a more personal level, I think the Foreign Service lifestyle can be very tough on the family.  For kids, having to change schools, friends and neighborhoods every few years can be extremely trying.  For spouses, it’s very difficult for them to focus on their own careers while following us around the globe.  It’s a big sacrifice.  I know it’s tough because my teenage daughters remind me quite often that I owe them big.

The Politic: You have significant experience of working in Southeast and East Asia, having held prominent positions in Tokyo, Hong Kong, and Kuala Lumpur, among others. What sparked your interest in East Asian diplomacy and international affairs?

I knew from the moment I decided to join the Foreign Service that I would focus on the Asia-Pacific region.  There are some obvious reasons.  This dynamic region accounts for more than one-quarter of global GDP, and over the next five years nearly half of all growth outside of the U.S. is expected to come from Asia.  Asia-Pacific is also home to four billion people and has the world’s three largest democracies — U.S., India and Indonesia.  We have two of our closest allies in Asia: South Korea and Japan.  And we have some exciting developments among Southeast Asian nations as well; they are becoming more interconnected and prosperous than ever before.  It is clear that we have critical interests in this region and there are some huge diplomatic challenges in the region as well.

Beyond these obvious factors, I was drawn by Asia’s culture and history.  I suspect my personal background of being born in South Korea and spending my childhood in Korea and Japan influenced my assignment choices as well.  And now that I have the privilege of serving as the first Korean-American U.S. Ambassador to Korea I think I have an even deeper appreciation for our ties and interests on the Peninsula and in the whole region.

The Politic: Over the past few months, the Korean peninsula has been in headlines all around the world. Could you distil some of the discrepancies between international perceptions of conflict in Korea, and what is actually happening on the ground?

During the period of heightened North Korean rhetoric and provocative behavior this past spring, the world was watching to see what Pyongyang would say or do next and so were we.  The United States takes all threats against our homeland and our allies seriously and we were coordinating very closely with our South Korean partners and other key countries in the region as we took appropriate action and closely monitored all developments on the Peninsula.  And we of course continue to remain vigilant and maintain very effective combined deterrent capability on the Peninsula.

However, our experience with North Korea teaches us that what we saw last spring follows a familiar pattern of bellicose rhetoric and threats coming out of Pyongyang.  Having lived with the North Korean threat for decades, South Koreans are intimately aware of this pattern and throughout the country people continued to live their lives and conduct business in a normal fashion even during the period of extremely harsh rhetoric out of Pyongyang.  In fact, the stock market wasn’t affected at all during the tense spring.

So I think this combination of strong deterrent capability and familiarity with the security situation meant that perceptions and attitudes on the ground were different from those outside the Peninsula.

The Politic: South Korea is currently under the United States’ nuclear shield, where the United States would guarantee a nuclear/large scale conventional retaliation were South Korea to sustain a nuclear attack from the North. Recently there have been reports of South Korea developing its own nuclear program. To what extent does South Korean possession of a nuclear arsenal increase the safety of its citizens, and could you consider the U.S. supporting such a policy?

I believe the key questions here are — What is the best response to the North Korean threat?  What policies will ensure the safety of the South Korean people and regional stability?  It’s important to note that the South Korean government itself does not feel that either a return of tactical nuclear weapons or an indigenous nuclear program is the answer.  Rather, the focus of both our governments has been to reaffirm the importance of our military alliance, which commemorates its 60th anniversary this year, and to continue to take steps to strengthen our combined capability.  For sixty years, the United States has pledged to ensure peace on the Korean Peninsula by deterring North Korean aggression and defending our ally, the Republic of Korea.  Our 28,500 U.S. troops on the Peninsula, our nuclear umbrella, and our government’s rebalance toward Asia all underscore that commitment.

The Politic: If the North Korean state government were to fall, to what extent would South Koreans support the rebuilding of North Korea either as a sovereign state, or as part of unifying the peninsula? Does the U.S. have any official policy on this? How strong are the bonds of kinship between North and South Koreans?

The United States continues to support the peaceful unification of the Korean Peninsula according to the will of the Korean people.  We remain deeply concerned about the welfare of the North Korean people and look forward to the day that this divided Peninsula is united and offers freedom and dignity for all Koreans.  During his visit to Seoul last year, President Obama observed that Koreans are one people and that if just given the chance, if given their freedom, Koreans in the North are capable of great progress, too.  I believe all South Koreans share that sentiment and they continue to yearn for this divided Peninsula to be united.

The Politic: Apart from the North Korean crisis, what is one of the most pertinent challenges facing South Korea?

I cannot think of another country that has experienced as rapid a development as South Korea.  After the devastation of the Korean War, the ROK was a recipient of U.S. development assistance and now it is a member of the OECD and one of our donor partners, assisting the world’s most vulnerable.  Korea’s democratization has been equally dramatic.  It’s an impressive transition, but a quick one, and many South Korean friends say South Korea must successfully manage the byproducts of change, including an aging population, low-birth rate, gender equality issues, and a growing multi-cultural society.  There are no doubt difficult challenges ahead for Korea but when you look at how Korea has managed its economic and political transformation so far, I believe there is reason to be confident about Korea’s ability to address these issues.

The Politic: How do you promote American economic, political and cultural interests/values in South Korea?

First, let me say that it’s a team effort.  I’m very proud to have talented and hard working colleagues at our Embassy in Seoul, both American and Korean.  And U.S. Forces Korea and the U.S. business community are our very important partners.  Effective cooperation and coordination with the Korean government is of course a critical part of advancing our interests on the Peninsula.  But diplomacy is now much more than official interaction.  We do our best to engage a broad cross-section of Korean society through various initiatives and means to strengthen our people-to-people ties especially with the younger generation of Koreans.  All our American officers are actively engaged in public outreach efforts.  We run programs to promote a broad range of important values including women’s empowerment and multi-cultural understanding.  South Korea is a high-tech, “wired” society and so social media is also a big part of our outreach effort and often the most effective way to get our message out broadly and quickly.

Embassy of the United States to South Korea: http://seoul.usembassy.gov