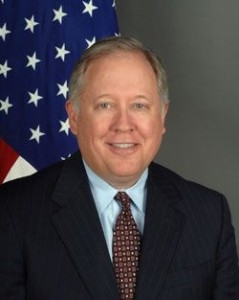 Thomas A. Shannon Jr. is a Career Ambassador in the United States Foreign Service and the current U.S. Ambassador to Brazil. Shannon has served around the world, including stints in Guatemala City (1984 to 1986), Cameroon, Gabon and Sao Tome and Principe (1987 to 1989), Brazil (1989-1992), Washington D.C., and the Organization for American States. He has also served as the Assistant Secretary of State for Western Hemisphere affairs from 2005 to 2009, and as the Special Assistant to the President and Senior Director for Western Hemisphere Affairs at the National Security Council from 2003 to 2005. Shannon was confirmed as U.S. Ambassador to Brazil on December 24, 2009. His tenure as the U.S. Ambassador to Brazil has been marked by the expansion of commercial ties between the two nations, the opening of new American consulates in Belo Horizonte and Porto Alegre, and increased investment in educational and social programs, such as the Youth Ambassadors Program. Shannon is a graduate of the College of William & Mary and Oxford University.

I was very interested in a career in public service. When when I graduated from the College of William and Mary, I got a scholarship to study in the UK at Oxford University. After my time at Oxford University, I decided that I enjoyed foreign affairs. I enjoyed diplomacy, and I enjoyed the challenge of living and working in foreign environments. I thought that the Foreign Service would be a unique, interesting and fun way to serve my country.

The Politic: What do you think are some of the main challenges of the Foreign Service today?

That is such a great question, actually, because diplomacy is changing in a significant way. Relations between nation states are, of course, still the fundamental building block of diplomacy, foreign affairs, and American foreign policy. But increasingly, we are seeing the emergence of civil societies as the actors that influence diplomacy. There is an effervescence — that’s the word — an effervescence in the world today. This requires diplomats to be agile, flexible, and in tune with what is happening in the country in which they are working. This requires an openness of mind that I’m not sure diplomats historically have had. Diplomats are quite accustomed to the institutions present in nation states, like foreign ministries and presidencies — all of which remain important. But adapting to a much more fluid, much more effervescent environment is one of the biggest challenges of today

The Politic: What would you say is your job exactly as U.S. Ambassador to Brazil, and as the foremost diplomat representing the United States in Brazil?

First and foremost, an ambassador is the President’s personal representative and a representative of the United States with the power to act on behalf of the United States. So it is my job to take care of American interests abroad, especially in a country like Brazil, with which we historically have had such a friendly and long-standing relationship. Some of these interests are the welfare of American citizens who are here in Brazil either as tourists, or living here for business or other enterprises. It has to do with looking after American commercial interests, investment interests, and promoting U.S. security interests and political interests. Brazil and the United States are working in the same areas and we must help Brazil understand our concerns in Asia, Africa, or the Middle East.

Beyond that, I would say that the job is also acting as a bridge between our two societies by helping Brazilians understand what is happening the United States. We must help people in the United States understand what is happening here in Brazil too. We are at a very interesting moment in Brazil’s history. It is a country that has transformed itself in a very short period of time. It has found ways to extend its democracy and insert itself in the global market economy, bringing development to its citizens in both social and equity issues, like poverty, inequality, and social exclusion. The changes sometimes take place so fast, and they are taking place in an international environment in which the United States has been focused on China, Iraq and Afghanistan. We are in a decade in which many of these changes in Brazil were not perceived or understood. But they are now. Part of the job of my embassy and my consulates here in Brazil is to help people in Washington, especially in the policymaking community, but also the businesspeople, understand how changes here have created a new environment for us to engage with Brazil.

The Politic: On that note, I have a question about Vice President Joe Biden’s recent visit to Brazil, in which he remarked that 2013 marks “the beginning of a new era in the relations between Brazil and the United States.” What are some concrete policy changes that result from this refreshed relationship between the two nations?

The reason why he mentioned this, of course, is because President [Dilma] Rousseff will be traveling to Washington in October for a state visit. A state visit is the most elaborate and formal of diplomatic visits that we do. It is a rare honor — the Brazilian president has not had a state visit since 1995, when Fernando Henrique-Cardoso visited President Bill Clinton in the White House. This obviously signals that we understand Brazil and President Rousseff in a special way, and that we are reaching out to Brazil and to President Rousseff in a special way.

As Vice President Biden noted while he was here, the areas in which we can work are many. You have the energy side: Brazil is a major producer of energy, such as hydroelectric energy, biofuels, and solar energy. It is also a major producer of oil and gas, with the pre-salt oil and gas findings in the Atlantic Ocean. We too are a major producer of energy. We can play a strategic role in energy development in the Western hemisphere through building partnerships and intimate energy relationships. These will give energy security to both Brazil and the United States, give energy security to the Western Hemisphere, and act as a stabilizer globally when it comes to energy crises.

On the education side, there is a huge push by the government of Brazil to put Brazilian students who are studying science, technology, and math, in U.S. universities. There is an equal interest from our part to put Americans in Brazilian universities and to begin to create a network of relationships not only between students, but also between universities, faculty, laboratories, and researchers. We want them to be able to share all of these practices and innovative developments that they are able to accomplish. But that is obviously just a few [examples] out of many.

The Politic: Today, the American Chamber of Commerce (AMCHAM) is present in 12 different Brazilian cities, besides Sao Paulo. It is responsible for linking the U.S. and Brazil commercially. In your opinion, what is AMCHAM’s importance, and what are the main challenges it faces today?

Brazil has two big AMCHAM chambers. AMCHAM Rio is one of the oldest AMCHAM’s. It is probably the oldest in Brazil and perhaps one of the oldest in the world. Sao Paulo is also one of the largest AMCHAMs in the world. And you are right: they can have subsidiary relationships with many other local AMCHAMs scattered throughout Brazil. What is interesting about the AMCHAMs is that they have become a meeting point not just for American companies, but also for other foreign companies and for Brazilian companies. So much of the representation isn’t specifically American. The Chamber itself has become kind of a meeting point for anyone who is interested in commerce in Brazil.

Obviously, as Brazil globalizes, and as its economy globalizes, one of the big challenges that Brazil is facing is how to open its markets. It must do so in ways that allow it to take advantage of opportunities in a global market without necessarily exposing its industry to the kind of competition that would damage the economy over time. In the short term, it must also work to improve the competitiveness and productivity of those industries that are not yet prepared to compete on the global market. The AMCHAMs play a very important role in that process. Most of the companies that are present in the AMCHAM are companies that operate worldwide and understand what the global economy needs and how it operates. I can go on and on about the history of AMCHAMs. The AMCHAMs do many, many things, but in many ways they can act as that important initial bridge into a global economy.

The Politic: Your term as the U.S. ambassador to Brazil has been marked by the support of educational, medical, human rights, and developmental programs such as the Youth Ambassadors Program and Science without Borders. How do you evaluate the importance of those programs for the Department of State, for the United States, and for yourself personally? 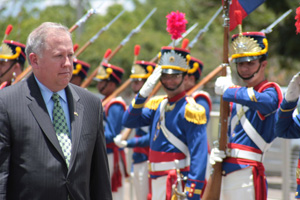 The Politic: Is there one experience, person, or event, in the U.S. or Brazil that has influenced one or more of your policies? How so?

You know, I served in Brazil from 1989 to 1992. I was only a third junior, but I was special assistant to our ambassador. The ambassador was a man named Richard Melton. He was a superb diplomat and somebody who understood Brazil well, somebody who was a conceptual thinker, and somebody who found ways to understand what was happening in Brazil at that time. Brazil was still in the process of re-democratization and was only five years out of a dictatorship. It was returning to civilian government after two decades of military government and still faced many political, economic, and social challenges. [Melton] taught a lot about Brazil and about how to understand changes that were already taking place. He helped to instill in me a deep love and admiration for this country. So although there are many moments and many other people who influence how I think about Brazil and how I act here in Brazil, he was the guy who convinced me that this was a country worth sticking close to.

The Politic: How do you feel that America is represented abroad and are there any elements of American foreign policy that you would want to change?

In terms of what I would like to change, I am not quite sure how to respond to that, because, as with everything, we live in a very dynamic world. One of the remarkable things about American diplomacy is that it has never been a defender of the status quo. Our diplomats have always sought to find ways to make sure the United States a leader in what is taking place in the world. The visit of Vice President Biden made evident that as this administration pivots towards Asia, it is also going to focus on the Americas. I think that is very important. This is a region that is democratic; it is committed to a market economy and has in place several processes of regional integration in South America, the Caribbean, Central America, and North America…

I would just argue that as we address the issues of the Arab Spring and as we look to how we are going to deal with an increasingly competitive Asia, we not forget that we have an enormous and positive reservoir of political, economic, and social opportunities and partnerships that can be very helpful to us in the Americas.

Embassy of the United States to Brazil: http://brazil.usembassy.gov/