Ambassador Wanda L. Nesbitt is a career member of the U.S. Foreign Service and holds 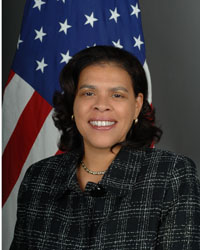 the rank of Career Minister. President Obama announced his intent to nominate her to be Ambassador to the Republic of Namibia on July 20, 2010, and the U.S. Senate confirmed her on September 24, 2010. Nesbitt was the U.S. Ambassador to Côte d’Ivoire from 2007 to 2010, where she promoted a resolution to an ongoing political crisis. She has also served as the Principal Deputy Assistant Secretary for the Bureau of Consular Affairs and the U.S. Ambassador to the Republic of Madagascar. Nesbitt has received two Presidential awards for outstanding performance, and is a graduate of the National War College and the University of Pennsylvania.

I studied International Relations and French in college. I was not really sure what I wanted to do, but I was always interested in doing something to help people and to make a difference in the world. So when a friend of mine told me about the Foreign Service, I thought that it sounded like a perfect match. Then, of course, I took the Foreign Service Exam. I passed the written [exam] the first time, but I did not pass the oral exam the first time; it is a complicated process. For public service, to make a difference you need to do something where you can help people and that’s what I really liked about the Foreign Service.

The Politic: Is there one experience, person, or event in your country that has greatly influenced one or more of your policies? How so?

I came to Namibia in 2010, so it has been about two and a half years. What I was surprised to know, and what I didn’t know at first, was the similarities between Namibia and the civil rights struggle in the United States. There have been many liberation struggles for a long period of time, like wars of independence, and the Namibians are very conscious of racial differences. So when people talk, their conversations are very much constrained by this racial consciousness; it is very hard to prompt people to talk sometimes.

For example, I once invited this girl who runs a restaurant to come to my house with about twelve other women entrepreneurs. We were going to talk about some of the challenges that women entrepreneurs in Namibia face, and it was a very nice breakfast — a very nice conversation. When it was over, and when she was going out the door, she said to me, “Ambassador, thank you so much for inviting us. Some of the women at that table, they can’t possibly understand what life in the United States is like.” That was an eye-opener for me. It was positive, and in some ways it pointed to the trust that she had in me. She did not believe that she shared a lot of things in common with me, so it was clear that she felt a little distant from me at first. But in the end she opened up to me, so I learned a lot in that encounter, especially the importance of drawing people out to talk about things and giving them trust to have a true, meaningful conversation.

The Politic: Which aspects of the United Nations cause you the most concern? Which areas of the UN are working or need more support?

I have somewhat limited experience with the UN. Where I have had some experience was UN peacekeeping operations, because I spent most of my career in Africa. There are expectations about what the UN must be able to do that are not realistic. Because people have unrealistic expectations, they tend to get disappointed about the UN, but it cannot possibly do everything. Maybe there are such areas where the UN could provide a lot of support, like in the countries where they need peace agreements between warring states and foreign parties. In all likelihood, they are not going to stop fighting, so people really need to have a better understanding of the UN. But that is a really important lesson that I have learned in the peacekeeping area: that we need to work harder to be more successful in peacekeeping operations.

The Politic: What misperceptions do you feel the average citizen of Namibia has toward America and vice-versa?

That is actually a great question; this is the kind of question that you guys need to ask everybody. I think that a lot of Namibians think that all Americans are wealthy. People, because Namibia is a relatively poor country, tend to just believe what they see in the televisions and other media, and they compare that to what they live. So many Namibians are surprised to hear that there are people in America who are malnourished and need food assistance and that there exists poverty and homeless people in the States. So I would say there is a real misconception about that aspect. Also, Namibians think that there’s not much diversity in the States, both economically and ethnically. Only 15 percent of Namibians have regular access to the Internet; so you can imagine that, since people do not have easy access to Internet, people do not have easy access to information about the United States, about Korea, and about a lot of places other than Africa. But there is a lot of information about other African countries, especially about South Africa.

The Politic: Are there areas where we are not meeting our obligations?

At least in Namibia, we are doing a lot to help the country. I would bet that most people in the United States do not know that we gave $90 million to Namibia last year to help with HIV/AIDS. I think that is very generous. Frankly Namibia could use three times as much, but the assistance we are giving is helping to keep people from dying from AIDS. It is also helping the Namibian government to build up the healthcare system so that they will not need our assistance forever. In a few years, hopefully, we will be able to turn over to them a lot of the things that we’re doing, and they will be able to keep it going. That’s a really good example of where we are meeting our obligations: we are doing the maximum that I think we can be expected to do in helping with the HIV/AIDS. And we are also training people to take it over, so that one day when our assistance is not there, we will not just keep holding them back.

The Politic: What sorts of exchange/community outreach programs do the most good?

The Politic: How do you promote American economic, political, and cultural interests/values in Namibia?

It is very complicated, but one of the things I do here is give speeches and talk to people about our values. Also we help American companies, investment, or business, and introduce American values and intents to the Namibian economy, such as transparency and accountability. The embassy also organizes specific events for women and girls to encourage them to run their businesses and start-ups, to give them a sense of empowerment and entrepreneurship, and to show them a practical way of social mobility. We also organize speaker series where we invite speakers from all over the world.

America is very well represented, and America deserves more credit than it actually receives. In terms of changing policy, I do not get paid to discuss policies. What I am paid to do is to accept, explain, and articulate the U.S. foreign policies in an understandable, reasonable fashion. It is like being an attorney, a public defendant who needs to defend at all cost, even against personal beliefs because it is part of your job. I am doing public service, and I am not a journalist or an academic. But in general, I think the U.S. foreign policy is doing a great job.

Embassy of the United States to Namibia: http://windhoek.usembassy.gov