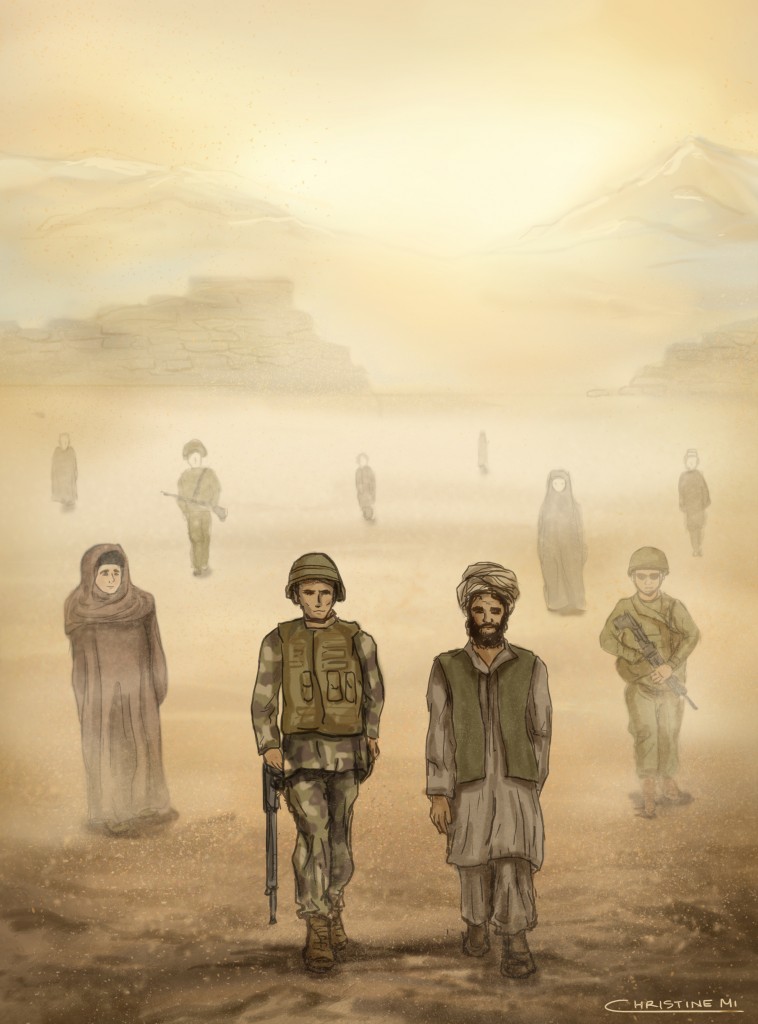 I come from Kabul, a city of endless war. Walking down the city’s streets, I can’t help but notice the ever-expanding cemeteries, the way that death and loss looms above everything. The presence of war––conflicts that first started more than three decades ago––has become so numbing over time that people sometimes fail to notice the tombstones that are everywhere. Like so many others, I no longer remember whom to blame, or what books to read to educate myself on the details of how it all started.

When thinking about Afghanistan, despair is the reflex all too often. The news is so unremittingly bad––the Taliban gaining strength, a weak, corrupt government in Kabul, the American withdrawal possibly leaving behind a vacuum, and potential civil war––that the easiest course would, indeed, be despair.

But that is not all I hear about when I talk to ordinary people — friends, family, neighbors, even strangers — who instead, somehow, live with the hope and determination to improve the situation in Afghanistan.

At 4:16 in the morning comes the sound of the muezzin, the call to prayer: “As-salaat u Khairu Minannaum.” Maliha, a fifteen-year-old and the oldest of six daughters, wakes up to offer the first of five daily prayers. She believes in these words: “Prayer is better than sleep.” Her favorite part of the prayer is the very end, when she sits down and asks God for whatever she wants, certain that He hears her, certain that today will be better than yesterday. In pitch dark, on a winter morning, she begins to make breakfast for her parents. She loves doing this because she remembers that her father thinks of her as “the strong pillar of the house that everyone can lean on.” She smiles when she thinks of the first time she brought groceries to her sickly parents. She not only carried the bags of flour and rice, but also paid for them with the money she had earned by selling the first dozen of her magazines.

Pouring boiling water into the thermos, she recalls the time her mother praised her in front of her cousins for being “capable of doing everything so well.” The steam also makes a difference when it’s only 20 degrees outside her tent. She should have thickened the “walls” by hanging more layers of blankets, but, as a street vendor, she never had the time. She had to wait an extra hour to try to sell at least one more magazine before returning home.

Maliha’s smile fades as she recalls the reason she didn’t sell the magazine the day before. “Why would you recommend this magazine?” the pedestrian had asked her, and she, the daughter of a pious father who had cautioned her against being dishonest, confessed shamefully that she did not know how to read, and, thus, could not recommend anything specific. The magazine never sold, and, as the day grew darker and colder, she headed home, trying to forget her embarrassment and focus instead on the numbers she had just learned to count, recalling how her friend spent an hour of his time teaching her the numbers before she started selling magazines. One, two, three, she counted, and wondered how fortunate she would be if only she knew how to read. She was certain that one day, she would read because, as her mother had told her, “it was always about persistence.” If she continued to look for words and ask her friends about them, she would eventually be able to understand what she sells to people.

Smiling, she remembers that she already knows how to read the word “tawwaquf,” which means “to stop.” It was written on the back of a military convoy. Her friend, who dropped out of school after second grade to sell gum and candy in downtown Kabul, told her that if she wanted to live, she had to know that word, for “going close to those convoys meant death.” She has heard stories of military forces indiscriminately shooting anyone who came close to their convoys. This brought her to the only reality she knew of, the reality of war––the condition in which she was born and raised. She remembers the day her father lost his leg by stepping on a mine, but she tries to put that out of her mind. Instead, she focuses on her numbers. One, two, three.

Every small step that Maliha takes to make her day better reminds me of the state and the spirit in which I see Afghanistan. Uncertain, damaged, poor, yet courageous, hopeful, and persistent people make Afghanistan the country it really is. And this is contrary to so many images in the media. At Yale, when I read about war, I feel alienated by the language of power, strategic gain, and military clichés. There is no question that these reports are of enormous importance, that they reveal the political and military realities that undergird life in my country, but they do not even begin to take into account the emotional dimension of the war and the way most people endure it. Only rarely do news reports mention the people who are most involved – those ordinary Afghans, unarmed and defenseless, risking their lives simply by going about their daily activities as students, farmers, children, parents. Yet they persist, regardless of the deprivation and suffering unimaginable to so much of the rest of the world, because they believe – they have to believe – that a better life awaits.

The hardships of war are not exclusive to a particular sect, class, or age group in Afghanistan. And decency and hope can come from anyone. Fifty miles away from Maliha’s tent lives Hamid, a 28-year-old man in a village who has endured repeated, intense scrutiny because of his stereotypical Pashtun looks and his active role in the nearby mosque. But he is a man who should draw admiration instead of suspicion. In addition to his efforts to collect donations to build a well near a mosque and buy prayer rugs, the bulk of his time goes towards his work as a teacher in an elementary school.

Hamid is often mistaken for a Talib. On the contrary, he actively works against the fundamentalism of the Taliban. His “jihad,” he says, is his struggle against ignorance and war. Sipping tea with Hamid after his class, I saw a noticeable similarity among the three of us – Hamid, Maliha, and myself. We all hadn’t known who and what the Taliban were until two or three weeks before they took over Afghanistan, in 1996. I can still remember, during the weeks leading up to the Taliban takeover, waking up at 3 in the morning and running to the basement to avoid the harsh sound of rockets and bombs from the jets flying above our city. My parents would tell us to close our eyes and ears and recite whatever Quranic verses we knew. After weeks of this routine, we woke up to a different world. “The Taliban have taken over,” a neighbor told my mom. We learned what that meant only after the first month of living under the Taliban. By now, these details have become sadly routine. But they were a shock to us then: schools for girls were closed, men were forced to grow their beards, and draconian laws were disseminated, only to be replaced with ones that were even stricter and less sensible.

The situation only worsened after the terror attacks of September 11. I told Hamid and Maliha how watching the 9/11 events on TV in Pakistan brought such distress to my family that my parents had to turn off the set and “pray for the souls of the innocent people to rest in peace,” as my father had said. Hamid had been shocked as well by the brutality and horror of the strikes. Like many people I know, the images from abroad stunned him. And soon, after the U.S. invaded Afghanistan, the images at home were distressing, as well. Every building seemed to bear bullet holes, he said, “reshaping the architecture of the city and the country with the scars of war.

The U.S. invasion of Afghanistan brought drastic changes to the country, but whether or not these changes served American or Afghan interests is an unanswered — and perhaps unanswerable — question. Humanitarian aid reports and websites routinely publish photographs of Afghan girls smiling in their school uniforms and of women without burqas, all in an effort to show a positive outcome of the war. I notice these changes every time I return to Kabul. More schools and universities are opening, businesses are springing up where once the doors were shuttered close, banks and TV stations are dotting the Afghan horizon – all of which gives me hope that Afghanistan is inching toward a more normal, productive future. The process moves forward in fits and starts, and there is ample evidence of skyrocketing corruption and a lag in building a working structure that will ensure, or at least signal the slightest sign of, a sustainable Afghanistan. My friends and I often joke about how having connections in the government would serve us much better than pulling all nighters to do well in school in order to get a good job when we return to Afghanistan.

I continue to go home to Afghanistan every summer and winter in hopes of learning as much as I can. The situation there is so volatile, however, that I struggle when trying to convey a sense of home to my friends at school. Mixed images of hope and distress go through my mind as I attempt to portray the realities of Kabul––-realities that go deeper than the war stories on CNN and in the papers. When someone asks me an understandable question, like what I think of the American invasion in 2001, I cannot provide a simple, political answer. While I understand intellectually how politics shape and distort life in Afghanistan, I personally tend to remember the people who have made me learn, appreciate, love, and hate this war all at the same time.

Ordinary Afghans like me want to survive and have very little understanding concerning the details and nuances of the politics of the war. Whether Afghanistan will come to some sort of reconciliation or face another civil war will depend on these very ordinary Afghan people who risk their lives to make a difference, something that can never be achieved by someone sitting in a barbed-wire compound, guarded by layers of concrete blocks and armed soldiers. For these people, to survive the Afghanistan that has been brutalized by the Taliban and invaded by coalition military forces, they must focus not on war, but on life – the day-to-day life where a father defies the traditions of his country to make sure his daughter goes to school; where a young girl sells water in the morning, goes to classes in the afternoon, and does her spelling practice on the edges of newspapers because she can’t afford to buy notebooks; where a young teacher spends his own meager earnings to provide supplies for his needy students, and where hope pushes back against the pressures of politics and war.

Afghanistan, to me, is a mixture of these images that are more powerful than all of the weapons, hatred, and manipulations combined. These images inspire me every morning as I wake up, hoping for a better day. Like Maliha, I too take baby steps every day. One, two, three in the morning. Then I recall that it has, indeed, always been about persistence.