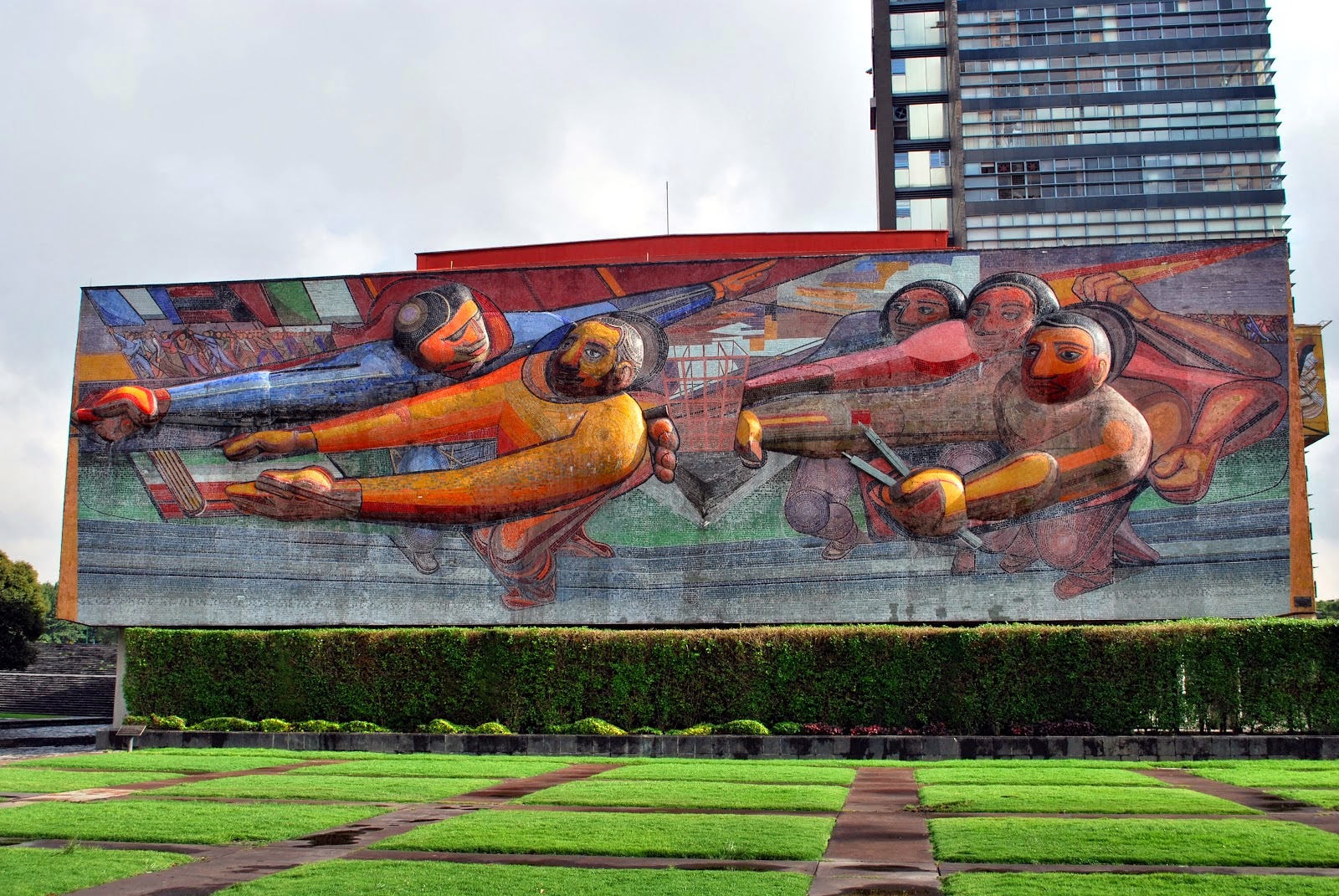 On the façade of a building on the campus of Mexico City’s Universidad Nacional Autónoma de México, five figures ascend a blue staircase, brandishing instruments of knowledge. One holds a razor-sharp compass; another, a 3D grid-like structure; yet another carries a book painted with the colors of the Mexican flag. These students’ heads are rotund and buoyant like planets, bulging three-dimensionally out of the mosaic; their planar arms extend like oars. Torso leaning backwards as if about to limbo, the leader carries his book as far away from his body as his limbs will allow.

This 1956 mosaic mural is by David Alfaro Siqueiros, a prominent Mexican artist active throughout the twentieth century. The most politically extreme of the “tres grandes” Mexican muralists, his art trumpets a radical Marxist ideology. In the wake of the Mexican Revolution, Siqueiros aimed to cultivate a nationalist identity through public art. Elements of native Aztec and Mayan art assert themselves throughout his work as symbols of independence in the shadow of an oppressive regime. In this particular work, the artist’s sociopolitical conscience manifests in a crowd of protesters visible in the peripheries of the mural. Colorful and vigorous, they parade a diverse set of flags. Meanwhile, the five students depicted appear oblivious to their presence.

The mural’s title is a mouthful: El Pueblo a la Universidad, La Universidad Al Pueblo:  Por una cultura nacional neohumanista de profundidad universal (The People to the University, the University to the People: For a National Neohumanist Culture of Universal Depth). The university in question—the UNAM—was founded in 1910 as a secular, nationally-minded alternative to its contemporary: the anachronistic Royal and Pontifical University of Mexico. The institution achieved autonomy from the government in 1929, prohibiting the state from interfering with curriculum and educational praxis. Tuition at the UNAM is near nonexistent, and it boasts an acceptance rate of only eight percent. Every day, thousands of passing students glance at the iconic mural, positioned above a grassy plaza crisscrossed by stone walkways. It is a fixture of the campus, taken for granted. Most interpretations view the mural as a celebration of the universal accessibility of public education. But the expressions of the students depicted—blank and naïve as they march single-file like lambs to the slaughter—suggest a more nuanced story. 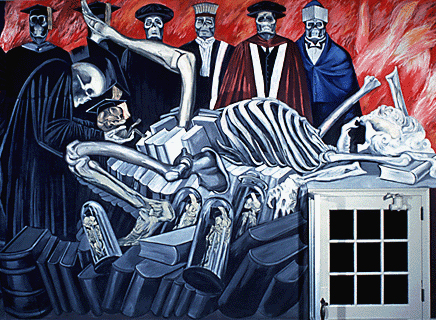 Siqueiros, along with many of his peers, advocated for art as a means to educating the people. But his conception of mass edification through art is fundamentally at odds with the elite institution of academia, for which the Mexican muralists expressed a distrust. El Pueblo echoes themes expressed by Siqueiros’s contemporary, the muralist José Clemente Orozco, in a 1932 mural ironically displayed at Dartmouth University. The work, entitled Gods of the Modern World, depicts a group of skeletons clad in academic robes aiding in the birth of a skeleton fetus. The mother lies prostrate on a sea of stony gray books, with vials of past skeleton embryos bobbing on its surface like sailboats. The work presents academia as an archaic and sterile institution, appeasing the masses through meaningless propaganda. Its guardians—the gods of the modern world—are literally dead, out of touch with the vitality of the working class. Orozco’s radical stance sheds light upon Siqueiros’s more nuanced argument, which considers the equalizing force of higher education in conjunction with its dangerous potential to placate.

The subjects of El Pueblo a la Universidad march triumphantly forward—but to where? The mural is not constrained to its own imaginary geography—rather, it mingles playfully with the surrounding city. The figures face westward, moving from the center of campus towards la Avenida de los Insurgentes, the longest avenue in Mexico City. This road will lead them back to their own villages, where they will feast on the freshly-plucked fruits of their knowledge with their families. A figure clad in royal blue points them westward, acting as guide. As if plagued by second thoughts, however, his other hand points in the contrary direction, imbuing what appears to be a simple procession with disorienting doubt. In fact, in a sketch for this mural, the guide looks towards the east—towards what the students have left behind. In this version, his eyes close in humble resignation. The students are effectively guided by a blind man.

The students’ hands—the instruments of manual labor—swell like boxers’ gloves. Their bodies pulsate with potential energy, biceps bulging with raw power. But their rigid limbs thrust straight ahead as if mummified. As the title of the work suggests, these students represent not the elite, but rather, the people. With roots planted proudly in traditions of manual labor, their weaponistic grasp of school materials suggests that they are foreigners to the ivory tower. In spending their days studying indoors rather than demonstrating on the streets with their peers, the students abandon their political obligations. Education is a vehicle for social ascension—but in climbing this ladder, they turn their backs on the people. The figures are herded down a track parallel to that of the protesters behind them, fated never to intersect. Siqueiros had an agenda in creating this work for Mexico’s premier public university. He certainly celebrates the liberating power of education—but he cautions against its dangers as well. To the thousands of students who glance at the work absent-mindedly while heading to class, he declares: don’t forget your power along the way.