Dr. Shirin Ebadi is an Iranian lawyer, former judge, and human rights activist. She is founder of the Defenders of Human Rights Center in Iran and was awarded the 2003 Nobel Peace Prize for her efforts at promoting democracy and human rights. Ebadi has lived in exile in the United Kingdom since 2009 and has been repeatedly ranked as one of the 100 most influential women in the world.

The Politic: Dr. Ebadi, in your book Iran Awakening you write, “An interpretation of Islam that is in harmony with equality and democracy is an authentic expression of faith.” When looking at the political systems of some Islamic countries, many people fail to see the relationship between equality and democracy and Islam. Could you explain your statement?

Like any other religion or ideology, Islam has different interpretations. In America there are churches that accept abortions and others that don’t accept abortion. Some accept same-sex marriages and some don’t, but they all follow the same religion. This is true about Islam as well. The non-democratic governments and fundamentalists interpret Islam to serve their own purpose. This is why in different Islamic countries we see different Islamic laws. For example, stoning or cutting off the hands of thieves has been abolished in many Islamic countries. But in some countries like Iran or Saudi Arabia, it still exists. The mandatory hijab does not exist in all Islamic countries. Therefore, it depends on who is interpreting Islam.

The Politic: What is the role of university and students in promoting human rights? Do you have any advice for Yale undergraduates?

As a student, what is most important is to be sensitive to the violations of human rights both in societies you live in and in other countries. When people become indifferent to violations of human rights, then statistics go up. Regarding Yale University students, this morning I was at a human rights clinic and I talked to some of them, and I found out that they have good programs. My recommendation is that if students are interested they can work with [academic] departments on human rights.

The Politic: What is your opinion about Hassan Rouhani? How do you see the future of relations between Iran and the U.S.?

According to the [Iranian] Constitution, the main powers are those of the Supreme Leader, and the President has very limited power. Therefore in the politics of Iran, not much will change. Even the fact that Rouhani was able to talk to President Obama was something approved by the Leader. But the pressure of the economic sanctions has made the Iranian government go to the table of negotiations. And I hope that the government of Iran is wise enough and remains there and does not leave the table of negotiations.

The Politic: What has been the biggest challenge in your career and what do you think is your biggest success so far?

My most important challenge is with fundamentalism. At home you see fundamentalism as a kind of discrimination towards gender, and in the society you see it in the form of tyranny. In reality I categorize governments that are not democratic — like the government of Iran — as fundamentalist. A fundamentalist is a person who [pursues] only his or her own vision and is not willing to listen to others or to accept any other mentality. And a dictator is exactly the same thing. My victory has been that I have been able to show to many Muslims that we can be Muslims but live a better life. At the beginning of the Islamic revolution my voice did not echo; it was like I was talking to myself in the mirror. But I am happy to say that now there are many who follow my steps and think the same. 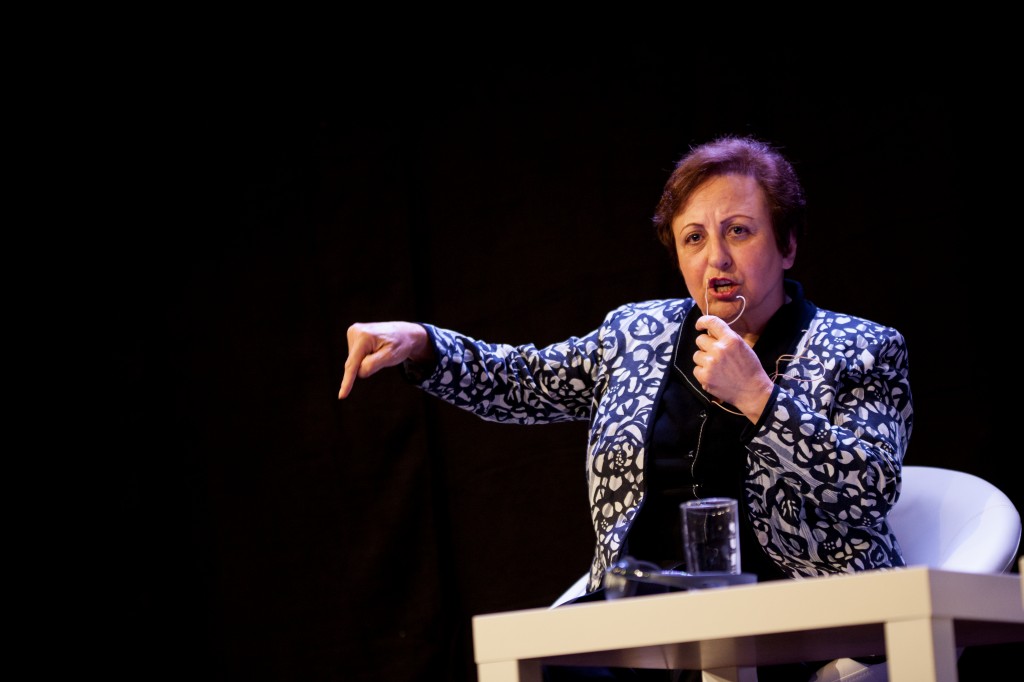 The Politic: In your human rights work concerning Iran, what lessons have you taken from the Arab Spring?

When the Arab Spring started, my colleagues and I sent messages to the people of Tunisia and Egypt urging them to look at the situation in Iran and to try to learn from it. And I am glad to see that the people of Tunisia were able to get out of a religious dictatorship. The people in Tunisia are Muslims but the constitution that was written there is very progressive. And we saw in Egypt that when Morsi wanted to bring about a religious dictatorship, the people rose and said that they did not want the Islamic Brotherhood.

The most important thing is that government should be separate from religion so that politicians do not abuse the emotional feelings of people of this religion. Religious governments during the Middle Ages in Europe prove how religious governments can stop progress. Therefore, the religion of people is to be respected, but the society is to be managed in a democratic manner.

The Politic: You received the Nobel Peace Prize in 2003. Much has been heard in the media about the Iranian government’s reaction to this, including their confiscation of your prize. Can you tell us what happened?

The government of Iran was never happy with my work because I criticized them. Prior to winning the Nobel Prize, I had been imprisoned as well. From the beginning of the revolution up to now, the radio and television stations of Iran do not broadcast any news about me. After the Green Movement of 2009, security officials raided my office and NGOs and shut them down. And on the excuse that I did not pay my taxes on the Nobel Prize, all my property was seized from me. Pursuant to Iran laws, however, all awards are tax-exempt. Thus between 2003 and 2005 they never demanded tax payment. I filed my taxes every year and received this confirmation from the government as well. The government came after me for taxes later, and though my defense was based on Iran’s laws, they insinuated that because I was late in paying taxes, I had to pay a fine of $1.3 million. However, the Nobel was worth $1.2 million. At any rate, all my property was confiscated and auctioned off. There was also a safety deposit box in my husband’s box, which was also confiscated. My Nobel medallion was in there. Pursuant to the objection of the Norwegian government and the international pressure, they did return the medallion, although not the rest of my property.

After that they prosecuted me. However, since I was not in Iran, my husband and sister were imprisoned, both for quite a while. My husband was also under severe torture. Under torture they made him repeat the things I was accused of, and they video-taped him. In this video, he says that I am a supporter of the West, that I do not deserve the Prize, and that I received it in order to topple the government. This was broadcasted on Iranian television twice.

The Politic: A final question to wrap up. Iran’s nuclear program is a big issue in the West. In the Western press, it is sometimes seen that many Iranians are in favor of the program as a way to stand up to the West. What is your take on the program?

[The point about Iranians] is not entirely true. It is the Iranian government that claims that it is a matter of national pride, and so they cannot stop enriching uranium. Approximately 8 months ago, I started a Dialogue on Nuclear Energy campaign because from 2005, the government of Iran prohibited the media from talking about nuclear energy. In this campaign, I asked everyone to come and talk. The results were that people wanted to stop enrichment.

Regarding nuclear energy, there are three main issues to discuss: the know-how of this technology, nuclear medicine, and nuclear power. The first two exist in Iran and do not require uranium enrichment. Uranium enrichment is for two purposes: either to make a bomb, or to generate power from nuclear energy. The government claims that it is not making a bomb, hence it must be [enrichment] for power. But nuclear energy for power is detrimental for the environment. It’s why the rest of the world is decreasing its use of nuclear energy. For example, Germany is closing down all of its plants, and in America, no plants have been put up in 20 years.

There is a lot of sunlight in Iran, but we haven’t even invested one dollar in solar energy. With the expenses we have incurred for [uranium enrichment], we could have had solar energy that would have been adequate for all of Iran. Whereas the nuclear plant we have only covers 3 percent of the country’s electricity. Continuing to enrich has resulted in severe sanctions against us. We don’t need uranium enrichment, and this is what the people believe.