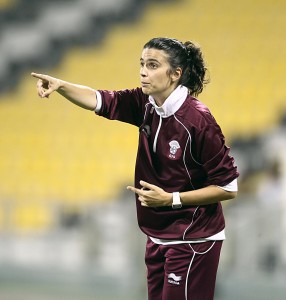 A week ago today, Helena Costa was named the first female coach of a European men’s professional football team, and the news outlets rejoiced.  Costa’s appointment as coach of the French club Clermont Foot was called a milestone in the path to gender equality, a major step for the newly inaugurated Women in Football Leadership program of the UEFA (Union of European Football Associations).  But amidst the optimistic media chatter, the more sobering aspects of Costa’s appointment have been missed.

Costa is certainly a well-qualified coach.  A native of the Alhandra district of Lisbon, Costa has managed Portugal’s Benfica (the first female to do so in the top two divisions of the European soccer circuit) and coached women’s national teams in Qatar and Iran.  But her qualifications may not have been all that motivated Claude Michy, Clermont’s president, to choose her.  The club vies with a local rugby team for viewership and is currently ranked in the bottom half of its division.  Appointing a woman to the job may have been simply a (very effective) publicity stunt.

Also, the fact that Costa’s appointment made headlines is troubling.  Several of the UEFA Women’s Championship League coaches are men, and nobody makes a big deal out of their appointment.  No one questions their ability to deal with the gender differences of their players.  The fact is, gender roles in sports are still extremely strong and perpetuated by an athletic culture where Dad coaches the little league team and Mom cheers from the sidelines, where the Super Bowl is the most watched television event of the year while ESPN devotes less than 10% of its airtime to women’s sports.  Costa’s selection as Clermont Foot’s new coach is certainly a step in the right direction for a sport historically plagued by bigotry of all varieties.  But I for one will hold off my celebrations until the day when such a decision doesn’t make the headlines.