“Want to grab a meal sometime?” is probably one of the most ubiquitous phrases at Yale, but most people probably haven’t asked it of the Governor of Connecticut. Regardless, I found myself on Tuesday, October 21, exactly two weeks before the midterm elections, having lunch in Branford with a man who has got to be one of the most stressed people in the world right now.

Governor Dan Malloy joined the Yale College Democrats for a casual, yet intimate, lunch. To break the ice, he asked everyone their names before opening it up to questions. Malloy made it clear that he was not here just to talk to them —he was here to have a conversation.

The first question asked Malloy was how he’s feeling right now. Engaged in the tightest gubernatorial race in the country, Malloy seems surprisingly calm and confident. He says he’s “hopeful” but knows that, if he’s behind, it’s because he did “the right thing.” In order to win, he knows that he will have to round up extra votes in New Haven. 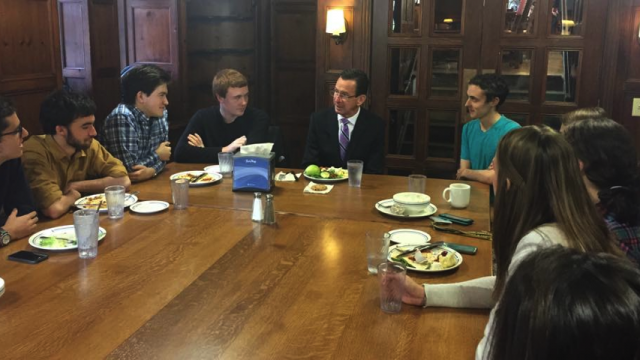 If re-elected, Malloy’s main goal is to “make change systemic.” As he puts it, “Until something is second nature, it can be rolled back.” So while Malloy is proud to say that he has gotten a lot on his agenda done, he worries that those successes could be easily overturned under another governor. He also wants to focus on the middle class and put in place programs to stop poverty, an issue that figures from the Pope to Janet Yellen have addressed recently.

Malloy then discussed reaching out to President Obama for support in the election. He says he thinks that Obama’s support will help and that people generally like Obama. Admittedly, he says, he and the President share the “middle aged white man” problem, referring to a demographic that is tough for them to reach. Still, Present Obama is set to stump for Malloy in Connecticut on November 2nd and Michelle Obama recently recorded a radio ad for him.

The questions then transitioned to match the intimate setting. When asked about his Roman Catholic background, Malloy made the distinction that he grew up in a strict Irish Catholic family, but it was “strict in values, not in doctrine.” He thinks of himself as “a humanist more than anything else.”

He wrapped up the lunch by answering the question of what he likes least and most about campaigning, as he snuck in a few bites of his Caprese salad and wrapped his pear up for the road. Fittingly, he said that one of the things he misses most while campaigning is going grocery shopping—he realized that he hadn’t been in a grocery store, something he finds relaxing and fun, in six months. He also gave any aspiring politicians in the room the advice to find a spouse or partner who supports their political careers; he says he knows it is hard for his wife, because he thinks he could’ve been a wealthy man had he stuck to a career in law.

Malloy closed by urging the group to do whatever it could to help his campaign. “I think we’ll win,” he said. “But it’s going to be a close election.”