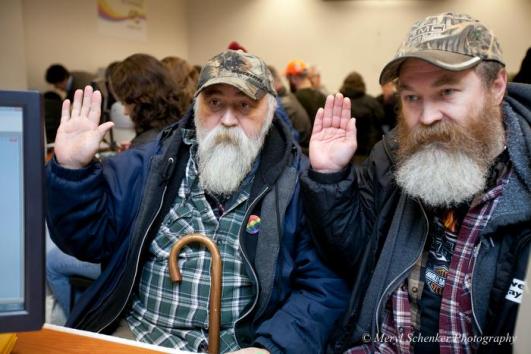 I am a stereotype.

As a Division 1 FCS college football player and a Catholic, I have been told that I should be the first person to stand up and protect “traditional” family values. I am a part of a culture that enshrines heterosexuality and align myself with an institution that has been one of the largest opponents of gay rights in the United States. Yet there is one problem with these classifications, especially when it comes to football – their accuracy is eroding, deteriorating under the growing number of players speaking out in support of marriage equality.

As the debate reaches the Supreme Court this week, this somewhat unexpected group has emerged as one of the primary defenders of gay rights. Still, as football players such as myself speak out, many wonder whether or not it is our place to get involved in such a politically charged issue. Last year, Maryland House of Delegates member Emmett C. Burns, Jr. penned a letter to the owner of the Baltimore Ravens imploring him to “take the necessary action” in silencing one of his players, Brendon Ayanbadejo, who had been outspoken in his defense of same-sex marriage.

While the outburst of support for Ayanbadejo in the wake of the letter’s publication demonstrated a broad acceptance of his right to speak freely, questions remain as to the role that athletics, and in particular football, should play in the fight for marriage equality.

In his recent essay in The New York Times, N.F.L. veteran Scott Fujita argues that athletes have always been agents of social change. From Jackie Robinson to Billy Jean King, society’s prejudices have been packaged, reinforced, and ultimately expelled through sports.

Yet in the case for same-sex marriage, the nature of the debate affords football a level of influence previously unseen in athletics. This is because the issue, no matter how diligently it may try to disguise itself, is not a legal one. It is not political. Nor is it religious. In truth, it is entirely cultural, with the oppositional rhetoric against gay rights hiding behind these doors in order to obscure its ugly foundation of pure, unadulterated prejudice.

But what does this all have to do with football, and how exactly does it differ from previous eras of discrimination and their relation to athletics?

While the origin of issues dealing with equality do tend to be cultural, never before has that intolerant culture been created, perpetuated, and reproduced by a sport to the extent that homophobia has been by football. The gladiator mentality prized by the sport translates itself into a definition of manhood that rewards physical domination while alienating those perceived to be weak. While this does not necessarily relate to marriage equality or gay rights, sexual conquest is invariably linked to this dominance, and is thus given its requisite value alongside physical prowess when assessing masculinity.

Though these norms have always been present in our society, as a country we have begun to break the connection between masculine toughness and hyper heterosexuality. Holding us back, however, is a national pastime that, simply put, forbids being gay. The unprecedented popularity of football has led to the diffusion of its cultural values into society. Fans admire not only their favorite players, but the qualities they appear to represent. By remaining silent about football’s cultural flaws, we, as athletes, continuously and subconsciously allow for them to pervade our communities and inhibit social progress.

This is not acceptable. The good news is that these values are entirely constructed, and therefore can be changed. To start, N.F.L. players such as Fujita, Ayanbadejo, and others like Vikings punter Chris Kluwe are attacking them every day. Still, they are a small minority. Without more voices, this stain of inequality upon the sport will spread and conceal all the positives associated with playing football, for I do believe there are many. Yet I am ashamed at the part my sport has played in denying many Americans the right to celebrate their love through marriage. We, as athletes, have the potential to help end this injustice. Lets seize the opportunity.

Refuse to be a stereotype.

Chris Looney plays football for Colgate University. An Academic All-American, he was Colgate’s nominee for the Rhodes Scholarship.