A switch to all-mail voting won’t necessarily be a boon for Colorado Democrats.

Colorado is becoming the third state—after Oregon and Washington—to conduct its elections exclusively by mail. Every registered voter has been sent a ballot to be returned by Election Day either by mail or to a designated drop-off site. Advocates claim that this method is cheaper, leads to more educated decisions (especially on ballot referenda), and makes voting easier. But with Sen. Mark Udall (D-CO) trailing Rep. Cory Gardner narrowly in the polls and Gov. John Hickenlooper (D-CO) locked in a dead heat with ex-Rep. Bob Beauprez, national Democrats are hoping that a boost in turnout will push them across the finish line. But will the change help Democrats?

Unfortunately, we don’t have a great sample size. Since Washington allowed counties to phase in the system over two decades, we only have Oregon, which passed a ballot initiative in 1998 to institute the practice after it was successfully used in several special elections. So, let’s take a dive into the midterm elections bookending Oregon’s shift— those of 1998 and 2002—to see what changed.

Turnout did jump considerably—the share of registered voters who voted rose from 59.0% to 69.1%—but did not favor either party. The share of Republicans who voted rose by 9.8pt; the share of Democrats rose by a slightly smaller 9.3pt. When we looked at county-level data (unfortunately, Oregon underwent redistricting between 1998 and 2002, so we do not have constant state legislative lines to work with), no edge for Democrats was apparent. The core of Democratic voters in Multnomah County (Portland) saw a somewhat larger rise (12.6pt) than average, but Oregon’s most Republican county, Malheur County on the border with Idaho, rose by even more (15.1pt). 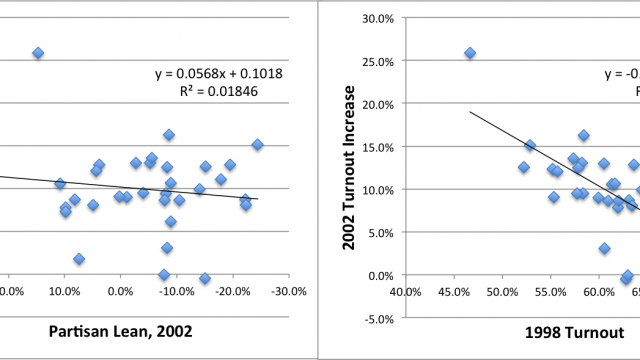 The only significant factor that our regression analysis found for a county’s rise in turnout was the county’s turnout in 1998—unsurprisingly, the higher the number of registered voters who didn’t vote in 1998, the higher the number of new voters under the new system. It also found that there was a slight preference, even after past turnout was considered, for counties that did less absentee voting before the shift, but this was not statistically significant. And while at least some of the turnout jump in 2002 was probably attributable to other factors—there was a competitive gubernatorial race in 2002, but not in 1998—there was no perceivable benefit to Democrats in the Oregon case. 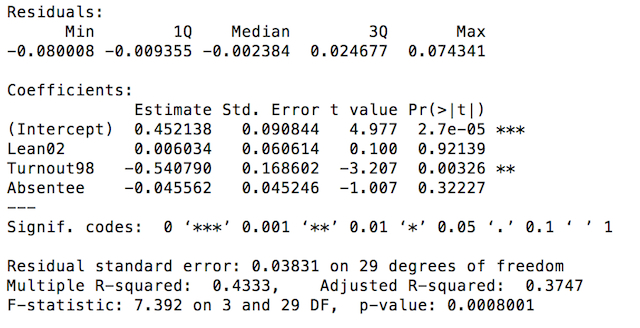 But there are reasons to believe that Democrats have a better shot in Colorado. First of all, Colorado is significantly more Hispanic than Oregon: Oregon’s residents in 2000 were 83.5% non-Hispanic white; that figure in Colorado today is just 69.4%. Though whites constitute a larger percentage of eligible voters (since they are more likely to be U.S. citizens of voting age), that was the case in Oregon as well. Hispanics are a notoriously low-turnout group whose share of the electorate should benefit from vote by mail. Moreover, traditionally low-turnout groups like Hispanics and young voters have moved further into the Democratic column: under-30 voters backed President Obama in 2012 by 23 pt—nearly twice the margin Al Gore received—and Hispanics gave the president a massive 44pt margin, while Gore led by 23pt. Either could push a turnout bump in the direction of Democrats.

But we don’t have to merely work in generalizations: we can look at the same data for Colorado. In Oregon, we saw that there was no correlation between a county’s turnout in 1998 and its partisan lean. But in Colorado, that isn’t the case today. 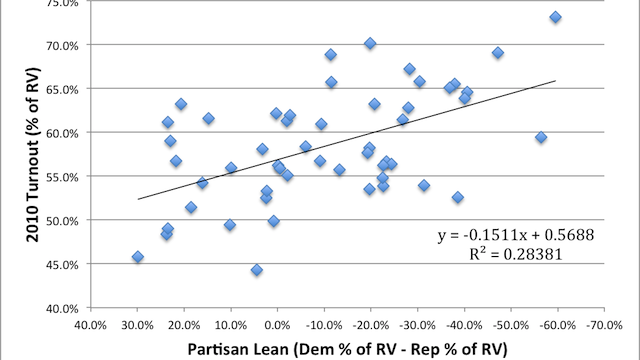 While the correlation isn’t strong, it’s certainly there: a county where Democrats have a fifteen-point registration edge had turnout roughly four points lower in 2010 than a county where Republicans have that edge. And if we expect these counties to get a larger boost, as they did in Oregon, because they have “more room to grow,” it could be decisive if either race is as close as it seems. But Team Blue shouldn’t be overconfident: the Oregon precedent is far from the game-changer that some strategists are expecting.

Raw data and sources for this article are available here.