Driving through John Day National Forest this summer, we wondered if the trees would ever end – these infinite, rolling hills of pine green and dark, healthy forest brown. Answer: they would. In two weeks, these tens of thousands of acres would be inferno orange. Residents of John Day Forest’s many towns would be evacuated, and wildfire would treat their houses no differently from the thousands of trees surrounding them. The flames were all-consuming. Immolation was impossible to avoid. 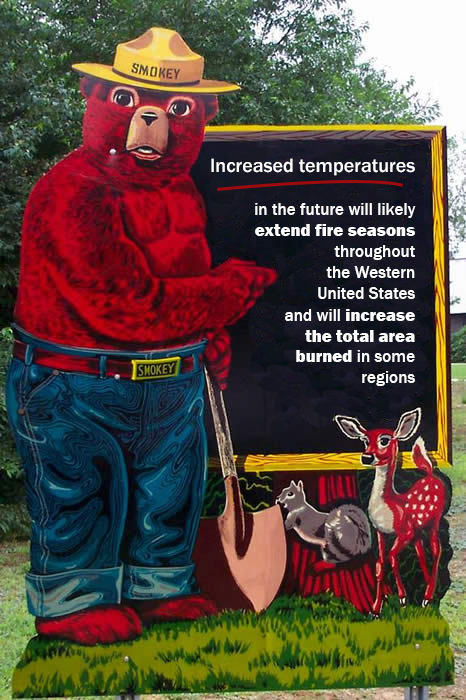 Or was it? Why was the fire burning in the first place? Smokey the Bear holds a disproportionate place in our collective understanding of forest fires––in actuality, many fires, such as the August fire in Glacier National Park this summer, originate from lightning strikes rather than negligent campers . There is a debate in the forestry world over whether it is best to actually understand most fires as normal, as a natural cycle to clear the land for new growth.

What’s less debatable is that, regardless of the source of their initial spark, these fires have been burning longer and harder in recent decades due to human-controlled factors; especially out West, wildfires are inarguably on the rise. Part of this is due to different forest management strategies (i.e. logging) that alter what fuel is available for these monster fires. However, studies correlate these upward trends in wildfires with upward trends in average temperature since the 1980s; a 2004 study by Donald McKenzie of the USFS Pacific Wildland Fire Sciences Laboratory et al. finds that, “Increased temperature in the future will likely extend fire seasons throughout the western United States, with fires occurring earlier and later than is currently typical, and will increase the totalarea burned in some regions.” Higher temperatures mean decreased snowpack, which makes for drier, hotter summers on average, and a longer overall “fire season.” Droughts and heat waves are the opposite of what you want when you’re fighting a forest in flames.

I figured all of this out before I read the studies, though. As road trips took me deeper and deeper into tree-dominated places this summer, it was hard not to feel as if we were heading into a tinderbox. The trees looked like kindling, and each flickering campfire felt like disaster waiting to happen. 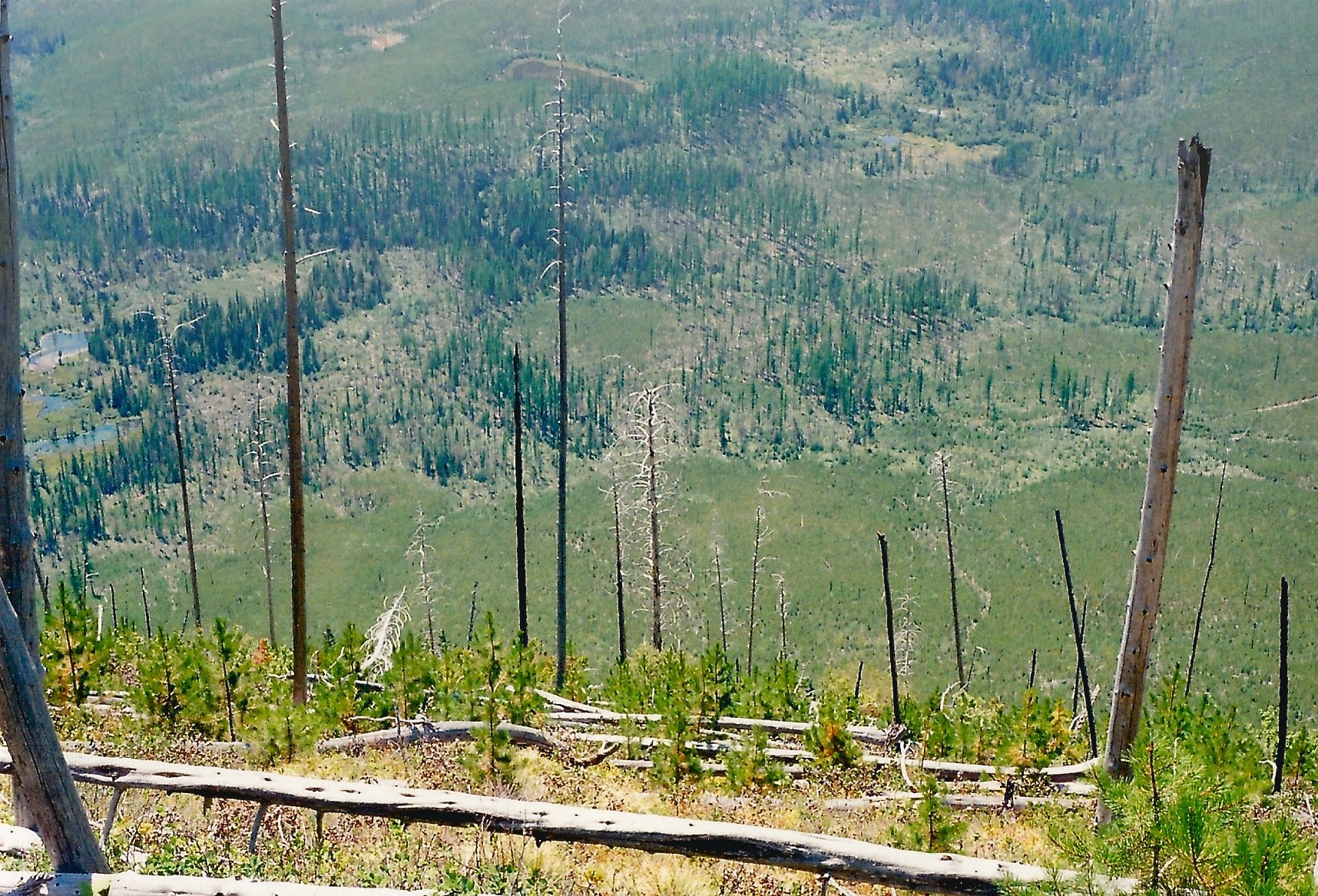 It wasn’t just me––everyone in the area knew that this summer was unusually dry and hot. What were typically enjoyable summer temperatures in the 80s shot up into triple digits, and the refreshing summer rains rarely arrived. When we went to escape the oppressive heat in local streams and pools, we found that the water level was noticeably lower than what we remembered as children––there simply wasn’t enough snowpack this winter to melt into ourusual swimming holes. The mountain I have come to know as a skyline signifier of my hometown looked less like a familiar geometric mix of whites and greys and instead like a large, grey hunk of rock. (Indeed, in certain parts of the Cascades, snowpack is at only 8% of its normal level.) My Pacific Northwest paradise was no longer a Garden of Eden; as President Obama pointed out with exasperation in his speech in Alaska in September, “even the rainforest is on fire.”

Despite all the sweat-inducing evidence, though, wildfires aren’t usually talked about in this manner––that is, in context. You’re shown footage of a plane flying over the blaze. You see the mangled foundations of a burnt house and maybe a blackened toy wagon in what was once the front yard. But you can’t feel the drought and the heat through a television screen. An irresponsibly large 97% of TV news reports do not tell the listener about the decades of tinder, kindling, and fuel we have piled up long before the initial spark was ever lit. 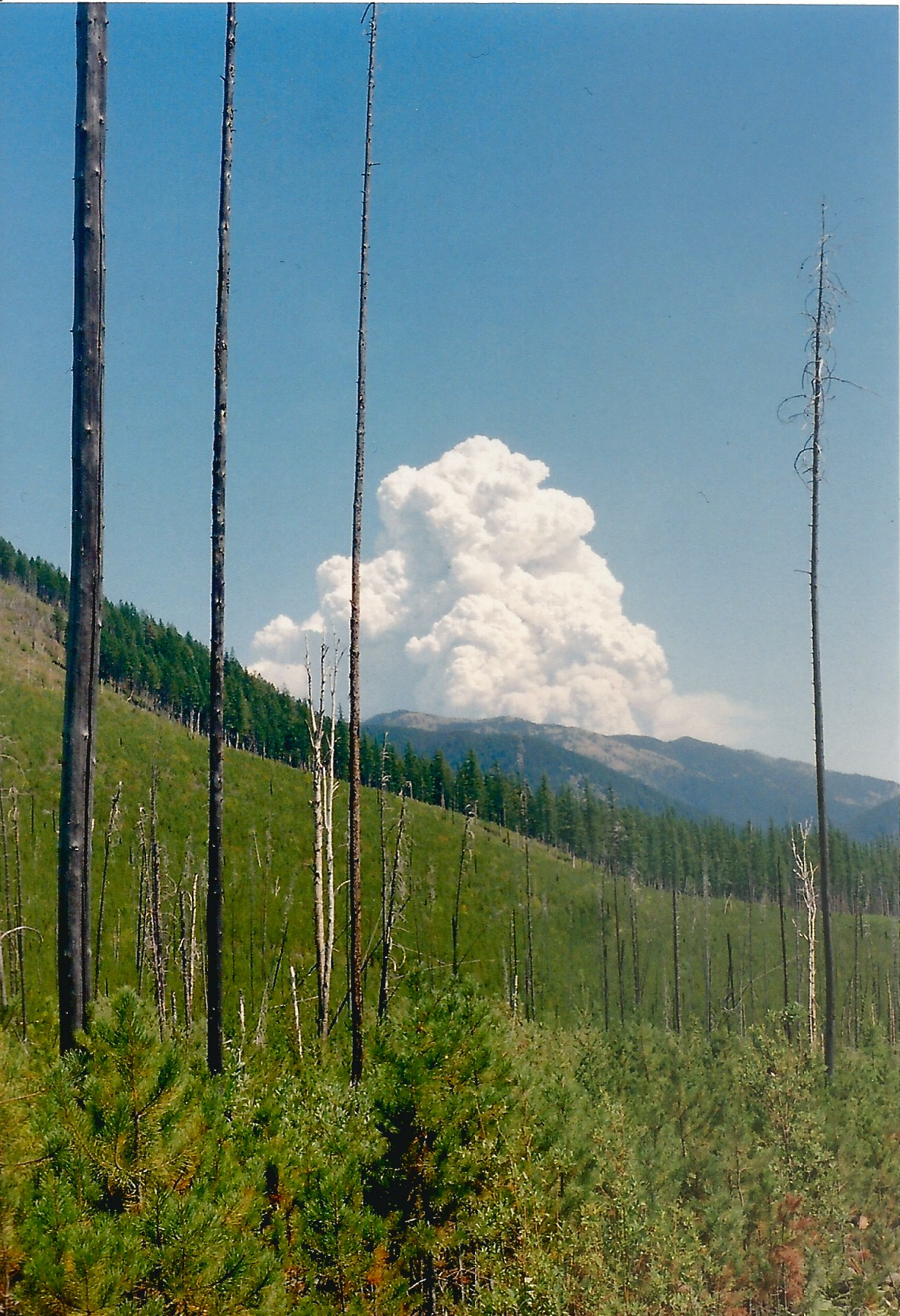 I went to Montana’s Glacier National Park in August (in part because I wanted to see the glaciers before they were gone, as trends suggest they will be soon). On our way down from a hike to a viewpoint, we caught what was arguably an even more astounding sight –– a massive, dynamic cloud of smoke billowing from a wildfire on the other side of the Park. My first thought was of the pictures of atomic bomb detonations I had seen in my history textbooks –– the scale of the cloud felt comparable. It was also a marker of death –– this was the scene of the crime where firefighters were drastically risking their lives (five first responders in Washington state would die the week after my trip). This was the source of the low visibility we had experienced throughout the state, even two hours south of the actual flames. This was the actual thing I had read about in the news –– an abstraction in my living room, but a real, moving, breathing thing that made the air taste funny out here. California Governor Jerry Brown’s words
about wildfires and droughts rang in my ears: “this is the future.”

The day I flew back to school and away from my hometown, my city was covered in smog. A particular set of weather and wind patterns channeled the wildfire smoke down the Columbia Gorge and into the heart of downtown Portland. My mother sent me pictures, telling me that the newscaster had advised people in the area not to go outside if possible. The landscape looked post-apocalyptic. The haze was thick and turned the sun a bright, eerie red.

So as my plane took off for the East Coast, I couldn’t help but think about this peculiar world I was leaving behind. I thought about the smoke-filled streets of my hometown, of the homeless residents of John Day National Forest, and most of all about the public servants who met their death trying to fight back at this unimaginably fierce, fiery destruction.

And what about the place that I was headed? Perhaps even more interesting is the vast majority of people, in larger proportions on the East Coast than the West, who would never experience the taste of such smoke in their mouths. I wonder what they think of the fires when they show up with increasing frequency on the evening news. There is something imperative to understand: fires do not happen without context. “Global warming” sounds like a tepid euphemism when literal flames are chasing at your heels. After this summer, I know what it’s like to see climate change literally combust.

Photo credits to Jackie Salzinger for the 2nd and 3rd images in the article.