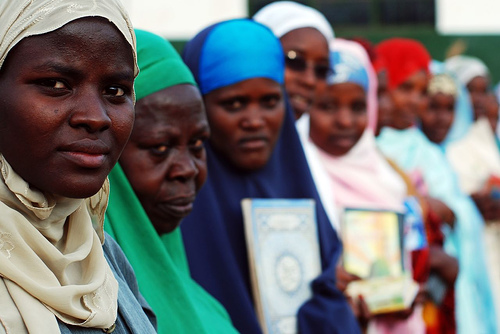 In 2012, the country with the world’s second highest proportion of female representation in its national legislature was Andorra. This makes sense to most people. Andorra is a small state in Western Europe, sandwiched between France and Spain. (For those of you familiar with The Princess Diaries, think Genovia). With high levels of education and life expectancy, low levels of unemployment and crime, and a powerful banking sector, Andorra indeed seems a likely place where women could easily rise to positions of leadership.

But number one? That distinction belonged to Rwanda. Yes, Rwanda — the small African nation best known in the West for the genocide that ripped the country in two and splattered blood across television screens worldwide in 1994. Even today, the country is still rebuilding from the physical and emotional destruction of the massacre that killed more than 800,000 people.

Women make up more than half of one house of Rwanda’s legislature, a fact that sets the nation apart from any other on Earth. In the lower chamber of Rwanda’s Parliament (the Chamber of Deputies), women hold 45 of 80 seats, including that of Speaker Rose Mukantabana, while in the upper chamber (the Senate), women hold 10 of 26.

That a crime-and-AIDS-ridden African country with a poor economy and education system has the highest percentage of women in its legislature may strike some as odd. But Rwanda is far from an anomaly. Of the twenty countries boasting the largest proportion of female representation in 2012, seven were African. With percentages ranging from 44% to 36%, Seychelles (#5), South Africa (#7), Mozambique (#12), Angola (#15), Tanzania (#18) and Uganda (#19) all join Rwanda near the top of the list. (Algeria, Burundi, Ethiopia, Tunisia, South Sudan, Lesotho, Sudan and Namibia are all among the top fifty as well.)

Where is the United States, one might ask? Why, at number 79, just one spot above Turkmenistan and dozens behind such model democracies as Uzbekistan, Afghanistan, and Iraq. And while many developed nations (such as the US) have never had a female head of state, numerous Africans states can boast of women presidents or prime ministers — some from decades past. Today, Liberia, Mauritius and Malawi all have female presidents.

These surprising facts pose an obvious question: why? Why do countries across the African continent — as well as the island nations surrounding it — have so many women in elected office, especially when compared to countries most Westerners think of as more egalitarian? 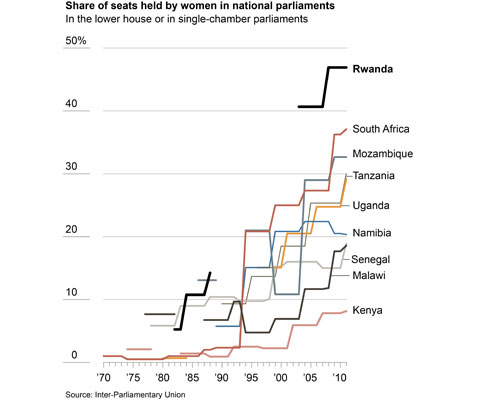 Undoubtedly the most significant reason for the rise of female legislative leadership is the numerous quota systems that have been instituted across Africa. Quotas reserve a certain number of seats in a legislative body for female representatives. In the Rwandan Chamber of Deputies, for example, 24 seats must be held by women (two others are saved for youth representatives and one for a person with disabilities).

According to the website for the Quota Project, a project by International IDEA, “The core idea behind this system is to recruit women into political positions and to ensure that women are not only a token few in political life.

“Previous notions of having reserved seats for only one or for very few women, representing a vague and all-embracing category of ‘women,’ are no longer considered sufficient. Today, quota systems aim at ensuring that women constitute a large minority of 20, 30 or 40 percent, or even to ensure true gender balance of 50-50 percent. In some countries quotas are applied as a temporary measure, that is to say, until the barriers for women’s entry into politics are removed, but most countries with quotas have not limited their use of quotas in time.”

A second reason for the abundance in women in leadership roles is that women in many African nations took active roles in reconstruction following civil wars and other catastrophes. The Rwandan genocide, for instance, decimated the number of male citizens, leaving a population that was more than 70 percent female by some approximations. The sheer paucity of men often left women with unsolicited opportunities to advance in politics as well as academia, the economy, and nearly all other sectors of society.

In post-genocide Rwanda, women entered doors that had previously been shut to them, becoming farmers, entrepreneurs, breadwinners, and, most significantly, the heads of households. Women proved adept in business, receiving microloans to finance endeavors and working together to prosper. Additionally, vices like drugs and prostitution were more difficult for women to purchase. (A major 1990 study in the Journal of Human Resources showed that women in poor households handled finances far better than men; money was 20 times more likely to be spent on improving conditions when it was under female control.) 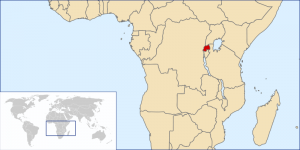 The Washington Post found that 41 percent of Rwanda businesses were owned by women in 2010. Moreover, although the population was roughly 52 percent female, women represented 55 percent of the workforce.

The women who began to work in the wake of the genocide became an economic force, paving the way for more women in politics. And as women rose to positions of power at the local and national level, they returned the favor, instituting policies that benefitted other women. Several years ago, Rwandan lawmakers abolished a law that required a woman to get her husband’s signature to qualify for a bank loan.

This phenomenon, although particularly pronounced in Rwanda, is by no means unique across the continent. Rampant violence and civil wars have decimated the male population in countries like Sudan, the Democratic Republic of Congo, and Uganda. This has left countless African families and communities reliant on women. In Africa today, women are making rapid strides towards equality in areas such as education and healthcare.

Furthermore, international support disproportionately aids women in African countries. Although funds go toward a variety of projects in the developing world, among the foremost programs Westerners support are those to help disadvantaged women. Microloans, for example, are far easier for women to attain than men. Women for Women International, on the other hand, specifically targets African women in poverty, teaching about entrepreneurship and group investments. Meanwhile, a variety of scholarships are only available for high-achieving female students. These programs are just one step down the path toward equality between the sexes in most African countries, but they have undoubtedly begun to help many women rise to the top in government and politics.

There is, of course, no single reason for the impressive percentages of women the legislatures of many African countries boast. Yet based on the numbers alone, many in the West may want to look toward Africa as we seek to diversify our governments at home. As Roxane Wilber, a senior researcher and writer at the Institute for Inclusive Security, wrote in 2011, “The cost of women’s exclusion isn’t just women’s exclusion — it’s ineffective governance. Poverty, lack of education, poor health, institutionalized inequality, gender-based violence, social unrest: the problems women face are the problems society faces. […] Fortunately, governments making strides can point the way to solutions for those still stumbling.”