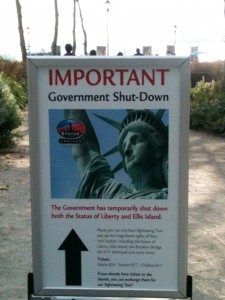 In the wake of the government shutdown, a furious American public wants to know who to hold responsible. At this stage, polls suggest that Republicans are still shouldering most of the blame for holding the spending bill hostage in exchange for concessions on what Rep. Todd Rokita (R-Indiana) referred to as “the most insidious law in the history of mankind.”

On top of the fury, there’s a sentiment emerging from the public that should seriously worry anyone invested in maintaining an iota of productivity in our political system. That’s the call for a compromise.

The counterintuitive truth is that the attitude swelling from a frustrated, disillusioned, and at times self-confessedly uninformed public to settle our differences and compromise on a spending bill could very well be the final straw on the aching back of our dysfunctional Congress. Among those who are fed up and are blindly urging Congress to just “work it out,” House Republicans can already claim a small victory.

By hijacking shutdown discussions to suggest it all stemmed from a disagreement over the finer points of Obamacare, House Republicans pretend the issue is that Democrats find Obamacare flawless while Republicans don’t. This is a ludicrous suggestion. Just like any other major comprehensive reform, the Affordable Care Act has its bumps and bruises, many of which President Obama has himself identified and is working to resolve. All the same, the ACA was passed by Congress three years ago, has weathered a presidential election during which its essence was a central issue, and was mostly upheld by the highest court in the land. That ship has sailed.

The strategy of hardline House GOP members is a brilliant one: reframe the debate and push the narrative that by not engaging in negotiations to modify parts of the Affordable Care Act in exchange for reopening the government, Senate Majority Leader Harry Reid and President Obama are being unreasonable. If a coworker breaks into your home and threatens to burn it down unless you renegotiate a small part of a deal you settled earlier at work, who’s the unreasonable one?

If the GOP can convince Americans to start asking why the Democrats won’t simply compromise, they will have won the battle and we all lose any hope of returning a moderate center to Congress. By sanctioning (and thereby normalizing) the circumvention of established legislative processes, we will all have sent a message to hardliners that they won’t be punished for their abhorrent and irresponsible behavior. The American public must demand adherence to our established legal processes, especially in the face of the upcoming debt limit battle.

GOP hardliners are praying that in a weeks’ time, the frustration directed primarily at them will have waned into broader frustration with Congress as a whole, and the public will be screaming for a compromise in the face of an impending and catastrophic US default. If that happens, the GOP may indeed manage to slice away concessions in exchange for raising the debt ceiling. A political environment that enables these hostage-taking tactics fails to support essential Congressional duties. In the next few days especially, that means avoiding an urgent and complicated conversation about how to reduce the nation’s debt — a difficult enough conversation to have when all sides are acting like responsible adults.

A solution to the nation’s debt crisis cannot be met without sacrifices on both sides. That sort of deliberation seems highly unlikely when representatives like David Schweikert (R-AZ) insist that “unless we have something of leverage, we don’t even get paid attention to.”

Schweikert’s assertion begs the question, why don’t Democrats similarly threaten to hold the government hostage in exchange for concessions on an issue they believe is timely and critical, like extending criminal background checks to all gun sales? Because one side is playing by the rules and some players on the other side have tossed the rulebook out the window, are throwing elbows left and right, and are undermining the very institution of democratic governance.

To prevent the GOP from employing reckless tactics that destroy our chances of reforming a poisonous political climate, we must hold them accountable and amplify voices on both sides of the aisle that denounce such tactics. In the next seven days, that means not kidding ourselves about who shut the government down in the first place. It’s a long way back to a healthy and functioning Congress. As we fight to get there, it is crucial that we save ourselves from falling past the point of no return.