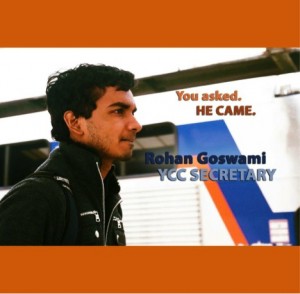 In terms of commitment and work ethic, both candidates for the secretary position of the YCC executive board are qualified. But because he has a more relevant platform and holistic conception of the responsibilities of his position, The Politic endorses Rohan Goswami ’15.

What sets Goswami apart is his accessibility and demonstrated ability to identify with and solicit student concerns, an integral, though not always intuitive, part of being secretary. Goswami understands that his communication duties as secretary do not merely include information distribution but also the critical collection and conveyance of student concerns, which is the first line for achieving progress.

Goswami is certainly qualified to fulfill the secretary’s more technical duties, having worked with directing communications and tabulating information in his experience as Master’s Aide and Executive Director of the Ezra Stiles Sibling Program for incoming freshman.

However, at a time of unparalleled campus-wide change, Goswami’s two years of involvement with college council would allow him to attend to the more nuanced secretarial duties. First, he would have greater familiarity than his opponent Andrew Grass with ongoing projects and the storied past of YCC, allowing him to better ensure that nothing is lost in this transitional period and to effectively provide the cohesion as secretary to bring individualized projects together.

These two years have also given Goswami crucial experience in articulating and representing the needs of his fellow students. Working on the Dining and Events Committees this past year, Goswami has already begun developing strong relationships with administrators, which will become more critical than ever in the upcoming year.

Goswami is ready to use these established relationships with the administration to achieve remedies to many student concerns. Of his primary priorities would be the pre-release of grading distribution for courses, effectively ensuring greater visibility of professor grading and final curving systems – which many students have found to be damaging in their ambiguity. Another of his priorities would be to expedite the expansion of dining capacities in terms of available meal plans and late dinner options – which have been a predominant student concern over the years. Already, he is incredibly in tune with the student body.

Goswami understands that as secretary, he has many critical administrative duties, and he is more than ready to perform them. But even more than this, he understands that the secretary is a mediator, with just as much opportunity and responsibility as other executive board members to bring student concerns forward.