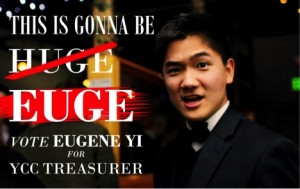 In the 2013 race for Treasurer of the Yale College Council, The Politic endorses Eugene Yi. Neither Yi nor Leigh Hamilton would make a poor treasurer. After speaking with both candidates, though, it was clear that Yi is the one who better understands and can carry out the enumerated duties of the treasurer.

On Wednesday, April 10th, the Yale Daily News endorsed Hamilton. We find their argument to be superficial.  The News affirmed that Hamilton offers a clearer vision for the role of the treasurer because she understands that the budget must be released at the beginning of the year, would like to reform the 10k Challenge, and wants transparency in the budget process.

Yi made those exact same points, but offered greater insight. He pointed out that this year’s budget was not released until halfway through the second semester. Yi explained that releasing it at the beginning of the year is actually written in the constitution, and that he would make it happen.

Yi, like Hamilton, wants to move the 10K Challenge to the first semester and increase accountability. He would like to turn it into a 20K Challenge, sustaining that $10,000 isn’t enough for something that will meaningfully impact the entire student body. When asked where that extra money will come from, he gave a definitive answer. He plans to allocate $10,000 of the $45,000 the YCC has for discretionary spending to double the Challenge fund. Hamilton, when asked about increasing funding, did not have a clear response.

Yi and Hamilton have both contributed to the YCC this year. Yi has a signature accomplishment to tout. He passed a referendum amendment that will put issues on the ballot of YCC elections. This amendment will enable students to vote directly on issues. This is a big win for transparency and accountability.

We believe that Hamilton would make a good member of the YCC’s executive board, yet when it comes to the specifically enumerated duties of the treasurer, Yi is right for the job.