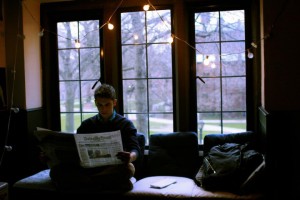 The Politic enthusiastically endorses Kyle Tramonte for vice president of the Yale College Council. The only candidate running for the position, the Saybrook sophomore has served in the YCC for two years now and is well poised to tackle the issues awaiting him in August.

Tramonte’s diagnosis of the YCC’s toughest obstacle will surprise few students. “Currently, the YCC is a reactive body to administrative policy,” he said in an interview with The Politic, as evidence by the recent controversy provoked by proposed changes to grading system. “My goal is to turn the YCC from a reactive body to a proactive body.”

For Tramonte, this means opening up the administration to the student voice. The ad hoc advisory committee the Yale administration assembled to recommend changes to grading policy included no student representative. “Grading policy involves both students and professors. There’s a problem when only one of those groups is sitting at the table,” Tramonte remarked. He acknowledges that gaining more influence in the decision-making process “is going to be tough. Trying to bargain for influence with a crappy hand is difficult. It’s not going to be as easy as bluffing, because we can’t do it. And ultimately, they are issues that needed to be targeted.”

The YCC’s problems don’t end with its inequitable relationship with the administration or with its dwindling relevance on campus. Tramonte also sees a desperate need for internal restructuring. “The YCC is an inefficient organization,” he admitted. “We have committee heads, and four to five students in each committee working on projects. This inevitably results in a situation whereby committee heads assume the brunt of the work and too many people are wandering around at the bottom.” The system that he and Danny Avraham, the candidate running uncontested for YCC president, envision is one that decentralizes responsibility and allows each representative on the council to take charge of two or three issues he or she is passionate about. “We think it would be a more effective system whereby each representative is his or her own driver. We want to give student representatives more autonomy and more responsibilities.”

How does Tramonte envision the role of the vice president within YCC? “The VP is responsible for standing alongside the president with students and administrators, and chiming in when necessary. But VP is also tasked with the internal functioning of the YCC, the managing of its membership. I would equate it to the role of a whip within a political party. I am going to have to make sure members are pursuing their assignments, and if they are hitting road blocks, I need to help them overcome them.”

Tramonte believes he has the personality to execute the office of the vice president. “My talent is working with people one on one. That’s the most valuable skill for a VP to have, in my conception of the office. It’s going to be about students who have expressed an interest in student government and seeing how we can achieve their goals. I see myself as a facilitator and enabler of effective change.”

Tramonte is also banking on his solid relationship with Avraham, who he has worked closely with on the YCC this year. “Former YCC vice president Omar Njie and then president Brandon Levin worked very well with each other. Danny and I hope to emulate that relationship.” In Tramonte’s opinion, Njie and Levin were particularly effective at collaborating with the administrators. This too he hopes to imitate. Tramonte believes Avraham’s frankness will help on this front. “Danny is not afraid to say what he thinks, both in front of students, administrators, and faculty.” Asked to point out a weakness in the presidential candidate, he couldn’t identify one. “I think that’s a good thing,” he said.

It is a pity that the race for vice president is uncontested. In any race with only one candidate, fewer ideas are shared. Dialogue is less fruitful and enthusiasm wanes. The Politic is confident in Kyle Tramonte. He has a calm demeanor and a good head on his shoulders. He offers both a vision and tangible policy. He understands the difficulties awaiting him in August, but is confident in his ability to get the job done. So are we.