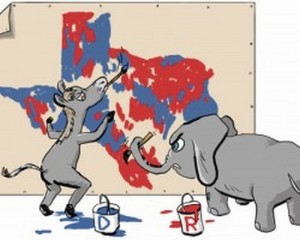 “There is a feedback loop where a lot of conservatives have lost interest in the politics of persuasion,” Jeffrey Goldberg, editor-at-large of National Review Online, affirmed at a recent appearance at Yale University.  Even though Congressional approval ratings hover around 10-11 percent, Representatives often have such formidable support in their own districts that they don’t have to worry about challengers from the opposite party.  Indeed, in stark contrast to the general approval rating of congress, 44 percent of voters approve of their specific Congressperson.

The discrepancy between the popularity of Congress and its individual members, as well as the staggering rise of polarity and brinksmanship within the legislative branch, is the result of a phenomenon known as gerrymandering. Gerrymandering is the manipulation of district boundaries at both the state and national levels for political gain. In many states, elected officials capitalize on the great influence they have over the redistricting process. Gerrymanderers clump minorities and special interest groups into oddly shaped and unnatural polities, distorting the actual representation. A major consequence of these distortions is the creation of highly partisan districts that perennially elect representatives of the same party.

According to Jason Stanley, who teaches “Democracy & Political Philosophy” at Yale University, “Democracy is not the same as majority vote, but if representatives are only ones that are chosen by a minority in a public, that is clearly undemocratic, and that’s what’s happening. That’s what gerrymandering has done.” Because the parties tend to concentrate frientrict to secure seats, and because of the low turnout rates generated by political primaries, gerrymandering can often lead to the same incumbent subverting democracy year after year.

“Gerrymandering encourages extremism because there’s no cost to taking extreme positions if you are in a safe congressional district,” Stanley continued. “If the district is one where everyone is a conservative already, then there’s no risk of losing to someone who isn’t conservative. There’s going to be no pressure to be more moderate, and then the only way to defeat you in that district is to become even more conservative.” Due to the highly unbalanced nature of the Congressional, State Senate, and State Assembly Districts created by gerrymandering, elected officials rarely need to worry about a challenge from members of the other political party.

Republicans and Democrats who represent districts containing more than 70 percent of voters from their own parties have little incentive to compromise when they reach Capitol Hill. These elected officials are often far more concerned with challenges from more extreme members of their own party during a primary. This is especially true of Republicans, who fear well-funded, well-organized Tea Party challengers. Because gerrymandering forces candidates to appeal to their base instead of moderates in order to defeat more radical opponents, working across the aisle with Democrats can mean vulnerability in a primary challenge.

Gerrymandering has not always been used to create monolithic districts. According to Laura Stoker, Associate Professor of Political Science at the University of California at Berkeley, some of the long or oddly shaped districts that reach out of cities into rural areas are for balancing purposes. Speaking of her home state of Minnesota, Stoker says, “The Democrats tend to live in urban centers and the Republicans are scattered all over. The only way to get districts that don’t have huge of number Democrats is to have these districts that go like spokes out of the Twin Cities.”

The most recent round of redistricting and redrawing of boundaries based on population occurred in many states after the recent 2010 census — around the midterm election which President Obama identified as a “shellacking” for Democrats. It appears that Republican-controlled and dominated statehouses have mastered the art of gerrymandering. While this secured seats for Republicans in the House of Representatives, it has also contributed to the growth of the Tea Party and the ensuing division within the Republican Party.

“The Republican State Leadership Committee itself boasted that clever GOP redistricting efforts were behind the party’s retention of the House last year despite losing the popular vote,” according to The Economist. Despite the plunge in poll numbers for Republicans in the House, many analysts still believe it would be nigh impossible for Democrats to retake the House.

Some states have successfully reformed gerrymandering. California, for example, instituted the “Citizen Commission,” which put redistricting in the hands of citizens. The Commission accepted applications from a set number of citizens registered with each major political party and a set number of citizens who declined to state their political preference. Applicants were invited to interview with the State Auditor’s Applicant Review Panel, who subsequently assembled a pool from which eight people were randomly selected. The winners of the lottery then selected the remainder of the committee. The goal of this process was to take the districting process out of the hands of potentially self-interested elected officials and give the important responsibility directly to citizens who would act transparently (all were required to release bios and financial disclosure statements) and fairly without political aspirations in mind.  Thus, they could draw balanced districts in which candidates of both parties would need to compete to win at the polls.

According to California State Senator Ted Lieu, “[The committee] took a lot of testimony from different stakeholders statewide in different regions, and when you watch the hearings it looks like they tried very hard to follow the ballot initiatives and the priorities of how they were supposed to draw the districts.” Lieu saw the process as beneficial for the state.

The Commission is an idea that other states could replicate. When asked what changes he would like to see regarding the Commission, Lieu told The Politic he would like to see this solution spread to other states and believes that “one of the best ways to reduce gridlock in Congress is to have every state have independent redistricting commissions.” Not only does the Commission process act in a transparent and bipartisan fashion, it also introduces guidelines and structure to gerrymandering. “The Citizens Commission will redistrict following a larger set of rules,” Stoker noted, when compared to previous processes led by legislatures.

The Commissioning process is but one of several alternatives that could be used to counter corrupt gerrymandering. Another proposal is the construction of a computer program or algorithm that will randomly generate Congressional Districts or, alternatively, create districts on a set of criteria set by the program’s creator. Because of the critical and sensitive nature of such a program, many have recommended that states select a panel of non-partisan computer and engineering experts using a process similar to that of California’s Commissioning system. While this idea may seem extreme, the Legislative Services Agency it has already implemented it in Iowa. The software created geometrical and logical districts that aimed to avoid breaking up counties within the state whenever possible while still creating bipartisan districts which promote electoral competition.

While all of these recommendations have merit, they have been controversial because of the unprecedented partisanship gripping Washington. A large group of policymakers reliant on gerrymandered districts for support bemoans the creation of fair and competitive districts: they fear that democracy might get in the way of their own success. Because of the lack of oversight for such a significant and powerful role within government, the drawing of district boundaries has been left open to abuse and politicization. Such manipulation has a major ripple effect on our government, and should be a central issue for all American voters.