In the past two years, voters have seen the old and new GOP each struggle for power. Its newest battleground has manifested in one of the safest Republican states in the Union: Mississippi. The combatants? Newly-appointed Senator Cindy Hyde-Smith and state Senator Chris McDaniel, who are squaring off to serve in the Senate for the remainder of former U.S. Senator Thad Cochran’s former seat.

In the latest round of shots fired, Senator Hyde-Smith accidentally insulted McDaniel’s supporters while speaking at a town hall in Neshoba in front of a crowd of Mississippi Republicans. After rounds of jeers from the group of McDaniel supporters, she said “you know, they’re easy to recognize. You hear them? They’re easy to recognize,” and at one point, calling the supporters “these people.”

State Senator McDaniel was quick to jump at the opportunity, turning her phrasing into a rallying cry for his rabid base. He tweeted out “THESE PEOPLE are sending Chris McDaniel to Washington. Join them.” 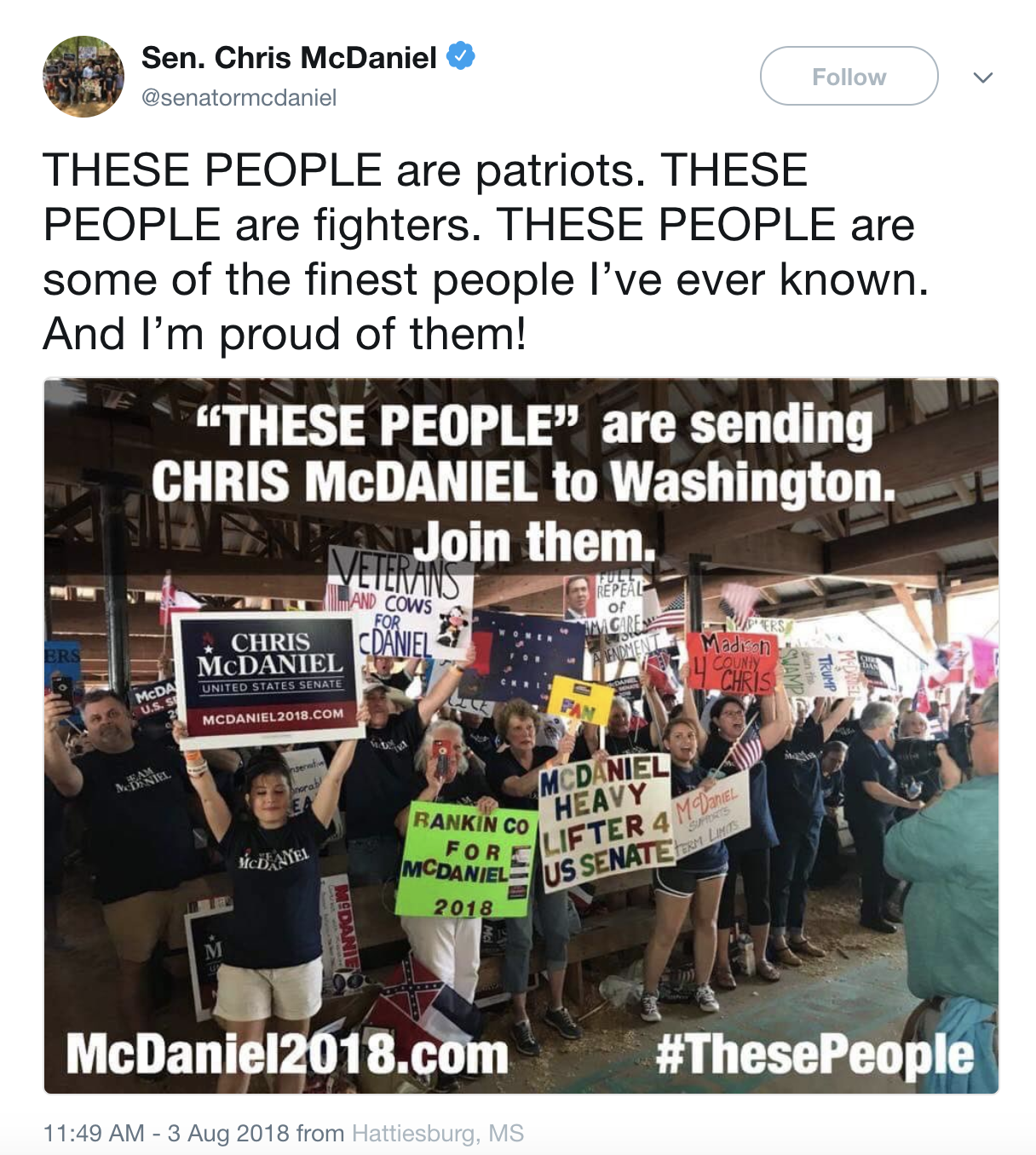 But who is Chris McDaniel? And why is he so bent on unseating Cindy Hyde-Smith? The history is complicated and runs rather deep.

McDaniel is no outsider to Republican politics. He entered the Mississippi Senate in 2008, quickly earning recognition as a rising star in the GOP. He was named “Citizen of the Year” by The Laurel Leader Call in 2010, and was described as a name to watch for in the GOP in 2012, with The Clarion Ledger mentioning that McDaniel would possibly challenge former-Senator Thad Cochran for a Senate seat in 2014. Political pundits quickly dismissed the idea that he would challenge one of the most beloved politicians in Mississippi history, however McDaniel was determined to ride the Tea Party wave to the United States Senate.

The 2014 primary between Cochran and McDaniel demonstrated how entrenched the GOP establishment was; in response to McDaniel’s calls for a debate between himself and Senator Cochran, Cochran became famous for saying “I’m not running for the debate team.” In the first round of the GOP primary, McDaniel shockingly came in first place with 49.6%, but then lost a runoff to Cochran.

The close race quickly upset the Mississippi GOP establishment, especially as McDaniel continued to fight. He said, “last week’s runoff election was a sham, plain and simple” in an appeal to fundraisers. He alleged that thousands of Democratic voters voted in the runoff to “make sure that Thad Cochran could return to Washington to keep pushing for reckless spending in the Senate.”

While the Mississippi Supreme Court quickly struck down his attempt to force a recount in a 4-2 vote, McDaniel earned the support of several Tea Party politicians, including from then-rookie Senator Ted Cruz (R-TX). Then the Republican Senatorial Committee vice chairman for grassroots outreach, Cruz claimed that the “DC machine” was detrimental to the growth of the party, and that “the ads they ran were racially charged false attacks.” Cruz continued to explain that the Democrats who voted in the Mississippi primary would not vote Republican in the general election: “they were just recruited to decide who the Republican nominee was. And that’s unprincipled and it’s wrong.”

Naturally, the GOP establishment in Mississippi was outraged—Mississippi is a very hierarchical state where nearly every higher elected office is treated as a step in the ladder. Governor Phil Bryant served previously as State Auditor, then Lieutenant Governor. Lieutenant Governor Tate Reeves served as Treasurer before becoming Reeves’s deputy. Now-Senator Wicker had 20 years of experience legislating for Mississippians before being appointed to fill Trent Lott’s Senate seat in 2007, and Senator Cochran had been serving in the Senate for over almost 40 years without serious challenge. To the GOP establishment who felt like they had completed the steps and waited their time to earn their positions of power, McDaniel’s bold move felt, in many ways, like a personal offense.

When Senator Thad Cochran announced his retirement in April, those who supported McDaniel were quick to appeal to Governor Bryant They cited McDaniel’s status as a young, energetic face in the GOP, his energy to motivate grassroots conservatives, and his hardline stances (which once excited the GOP’s base enough to nearly unseat one of the most popular public servants in Mississippi history). But not forgetting what had transpired just four years prior, Bryant and his aides made it clear that they would not be pressured into appointing McDaniel. Instead, Bryant chose to appoint then-Commissioner of Agriculture and Commerce Hyde-Smith, the first woman to serve as a U.S. Senator from Mississippi. McDaniel, who had already filed to challenge U.S. Senator Roger Wicker (R-MS) for his 2018 re-election campaign, switched the race in which he was running as part of an attempt to unseat Hyde-Smith for the last two years of Cochran’s term. Upon learning of the switch, Governor Bryant commented that “this opportunistic behavior is a sad commentary for a young man who once had great potential.” McDaniel had already created the fractures in party unity in 2014, and was ready to begin one of the most bitter primaries since McDaniel-Cochran in 2014.

What’s the state of the primary today? The Neshoba town hall shed a great deal of light into both candidates’ campaigns. McDaniel, whose personal Twitter account reads “Candidate for U.S. Senate | Low Taxes | Low Spending | Second Amendment | Strong Defense | Secure Borders | Keep Our Flag | No DACA | Mississippi First,” has made his bread and butter by highlighting the GOP establishment’s lethargy towards aspects of President Trump’s plans. A recent example includes him sharing Senate Majority Leader Mitch McConnell’s comments that funding a wall would have to wait until next year, saying “More excuses. More delays. More compromises. Aren’t you sick of this yet? They won’t build a wall, unless we make them! Let’s stand with President @realDonaldTrump and build the wall right NOW!” As part of such broad criticism, McDaniel has highlighted centrist Republicans’ bipartisan deal making as a sign of betrayal to GOP voters. Expertly, he brings light to Senator Hyde-Smith’s nuanced electoral history, in which she was a registered Democrat until 2010, and voted in the 2008 Democratic presidential primary.

Senator Hyde-Smith has shed equal amounts of doubt into McDaniel’s conservative street cred, highlighting her broad base of support from the same GOP establishment that McDaniel criticizes. While speaking with potential voters in speeches and town halls just like in Neshoba, she emphasizes Governor Bryant’s support: “I’m darn glad to say I appointed a U.S. Senator that’s a rancher and not a lawyer, and she’s doing one hell of a job.” This comment explains her appeal to the conservatives of Mississippi: in a primary where “Democrat” is a pejorative, she highlights her own conservative disposition.

Senator Hyde-Smith, therefore, is trying to highlight her public backing for President Trump’s agenda, underscored by a 100% voting record along his wishes. Her campaign team has also made light of McDaniel’s comments criticizing President Trump. For example, during the 2016 GOP Primary he lamented “Trump is not a constitutional conservative. He’s just not.” This, alongside other comments he made while supporting Senator Ted Cruz during the 2016 GOP presidential primary, gave Senator Hyde-Smith fodder for a group of Americans who’ve backed Trump since the 2016 primary, where President Trump received almost two-thirds of the total delegates.

Mississippi’s voters are nothing if not fired up for this race. At Neshoba, Hyde-Smith faced jeers from McDaniel supporters, prompting her “these people” comment, but she wasn’t the only candidate facing heat. As McDaniel spoke on stage, two men held up signs with his negative comments on President Trump. After refusing to disclose who they voted for, McDaniel said of them: “figures. Cowards.”

The hostilities between the two figures will not be ending soon, because there is no official primary for this race. Both McDaniel and Hyde-Smith are entered in the general election on November 6th against Mike Espy, the Democrat selected to run against the two of them. And if no candidate reaches a 50% share of the total vote, the race will span another 20 days until November 27th. While GOP races may often be sleepy in safe red states, this one is turning out to be a close pulse on whether the Mississippi GOP holds a Tea Party conviction like state Senator McDaniel, or if they’ve happily boarded the Trump Train for the coming future.