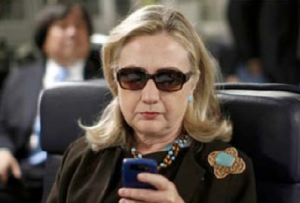 In January 2010, Secretary of State Hillary Clinton delivered a speech on Internet freedom and the future of global free expression. On this historic occasion, President Obama’s chief diplomat drew a bold line in the “cyber-sand” regarding the United States’ stance on online freedom. Speaking with rhetorical bombast worthy of John F. Kennedy’s Inaugural Address, Clinton guaranteed America’s commitment to promote freedom of the Web. Echoing Winston Churchill’s “Iron Curtain,” she spoke of the spread of restrictive practices and the “new information curtain” descending across much of the world. Again paralleling Kennedy, who five decades prior had called the United Nations “our last best hope,” Clinton held high hopes for this modern technology. The Internet was the “great equalizer” that would spread political freedoms and deliver economic prosperity.

The Secretary of State tempered her grand and lofty rhetoric with a warning: “Just as steel can be used to build hospitals or machine guns…modern information networks and the technologies they support can be harnessed for good or ill.” The Internet enables terrorists and criminals, opening up dark channels of communication and financing. With the promise of this new technology, there are also dangers. Maneuvering between the two has required embracing the Web to promote American ideals abroad while limiting it to protect U.S. interests. As much as the Arab Spring or the war in Afghanistan, this balancing act has come to define Clinton’s term as head of the State Department.

Clinton has internalized the centrality of the Internet in international affairs by organizing the State Department around social media and the Web at large. The Department has an active Twitter presence and operates nearly 300 Facebook accounts. Diplomats in the Foreign Service Institute undergo mandatory training in social media. The Department has tripled its budget to train individuals in computer use and surveillance evasion and funds technology initiatives aimed at overthrowing oppressive regimes. In Libya, for example, the U.S. restored rebels’ restricted Internet access by facilitating their use of fiber-optic cables.

Nikolay Marinov, Assistant Professor of Political Science at Yale University, commends the State Department for latching onto a particularly novel and effective means of promoting democracy. “Movements are really using the Internet much more than we realize they are,” he explains. The Web lets dissidents “call a protest [in a way] that the government cannot really control or interfere with.” While Clinton has taken advantage of the Internet to promote U.S. interests and political ideals, she has also confronted the resulting diplomatic tensions. Her denouncement of China’s web policies raised the heat on Sino-American relations. She has pushed the Chinese government to transparently investigate the hacking of the search engine Google, and she more broadly criticized its censorship practices. In response, Chinese officials warned that Clinton was harming already-shaky relations. According to Paul Richter and David Pierson of the Los Angeles Times, as a country seeking allies against Iran and North Korea, the U.S. would do well to avoid increasing animosity with its Asian neighbor. 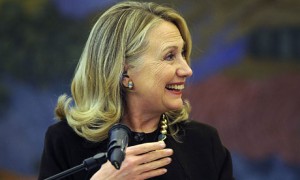 The Internet caused more problems for the U.S. in the autumn of 2010, when the website WikiLeaks released 250,000 sensitive State Department cables previously unavailable to the public. The documents contained blunt, unflattering feedback on world leaders and revealed that the U.S. had sought personal information on U.N. officials. In one embarrassing instance, Karl Eikenberry, the U.S. ambassador to Afghanistan, called President Hamid Karzai “paranoid” and “weak.” Clinton branded the leaks as “an attack on the international community” that jeopardized carefully-crafted partnerships vital to global security. Leading up to the release, she phoned world leaders to warn them of the impending outfall. She later spoke face-to-face with these officials during a pre-planned trip to central Asia and the Middle East. Still, America’s image suffered. Some countries have invited fewer U.S. diplomats to their meetings, and the diplomats that do attend must leave behind their notebooks. Meanwhile, CNN journalists Jill Dougherty and Elise Labott predict that world leaders will refrain from speaking candidly with the U.S. for fear of their statements being publicized.

The leaks call Clinton’s dedication to Internet access into question. In her 2010 speech on technology, she neglected to lay down America’s views on the Internet as a forum for publishing government documents. Clinton had lambasted authoritarian censors, so perhaps she felt it would be counterproductive or hypocritical to say how her own government would react if its dirty laundry were aired. Clinton’s actions in response to the leaks have qualified her previous statements on technology; freedom has its limits, and the law will punish those who use the facade of open speech to undermine the government. Yet, this view seems eerily similar to that of censors in oppressive regimes. The line between free speech and treason remains blurry, especially when it comes to distinguishing the U.S. administration from authoritarian governments.

Clinton has also had to confront the fallout from Internet scandals involving private citizens. In the autumn of 2012, the anti-Islam “Muhammad Movie Trailer” incited violent protests from Egypt to Libya. YouTube restricted access to the video in these two countries, although it pointed out that users could still access the content elsewhere.The U.S. government treated the video as the sort of online hate speech Clinton had decried in her landmark technology speech in 2010. But, as pundits pointed out, the video was a harmless, misguided satire of Islam, hardly worthy of hate speech. Nonetheless, given that the clip aired in a volatile region, where some countries ban defamation of Muhammad, the U.S. tailored its response in recognition of Middle Eastern sensitivities. The American embassy in Egypt condemned efforts “to hurt the religious feelings of Muslims.” Hence, Clinton’s love-hate relationship with cyberspace. She has overwhelmingly embraced the Internet, but the Internet has not always returned her warm overtures. The tension has shone a light on the subtle delicacies in American foreign policy, leaving unanswered questions for the next Secretary of State. Should the U.S. decry censorship at the cost of losing strategic allies? When does free speech cross the line into treason? And how involved should the government become in crises caused by private citizens’ online activity?

As more people engage in the global online community, the U.S. will undoubtedly continue to grapple with such questions.

Rachel O’Connell is a sophomore in Davenport College.