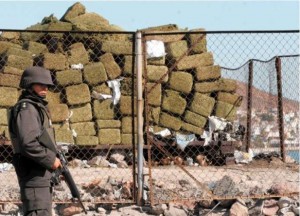 On September 26, 2013, Jesus Morales was sentenced by the U.S. District Court in New Haven to 63 months of imprisonment and three years of supervision after release. He was convicted for the distribution of heroin and crack. Just 41 years old, this was Morales’ seventh felony conviction.

Morales’ case calls attention to the politically charged War on Drugs, which has come under attack as an inefficient and racially discriminatory campaign. This past August, U.S. Attorney General Eric Holder took an official stance in the debate by publicly denouncing the current penal system, particularly minimum drug-sentencing laws. He also threw his weight behind a new solution for ending drug abuse: incarcerating dealers and targeting gangs instead of punishing addicts. This strategy intuitively focuses on the people trafficking and distributing the drugs as the source of the problem. Since then, Congress has taken the initiative to reform mandatory minimum drug sentences.

Much of this debate revolves around the moral distinction between consuming and dealing drugs. Is there anything inherently unethical about the act of using drugs? It’s debatable. But according to the law, drug use is a criminal act and can therefore be interpreted as decisively immoral. Likewise, the law frames dealing drugs as a criminal act; yet in this case, the immorality of selling drugs for a profit at the expense of others’ well-being and safety is less ambiguous. Thus, it is problematic to interpret behavior that violates drug laws as immoral, since we must assess how fair the laws are to begin with. Holder is imploring Congress to change the misguided laws, which he believes are perpetuating a “broken justice system.”

Like several other cities across America, New Haven has launched law enforcement operations that specifically aim to dismantle drug gangs. Beginning in May 2012, Operation Bloodline has successfully arrested over 100 individuals affiliated with the Bloods — the largest and fastest growing gang in Connecticut — including the Tre Bloods, who are responsible for distributing and trafficking narcotics in the Fair Haven and Dwight-Kensington neighborhoods.

The operation is a joint effort between the New Haven DEA Task Force and Police Force. It has employed a variety of tactics, including court-authorized wiretappings, extensive physical surveillance, controlled purchases of narcotics, seizures of narcotics and firearms, and the execution of search warrants. Civil libertarians questions whether these tactics violate Americans’ basic freedoms; regardless, they certainly don’t tread lightly.

In May 2012, 61 people associated with the Tre Bloods gang were convicted of conspiring to distribute narcotics after they were found in possession of cocaine. One suspect’s father questioned the legitimacy of the conspiracy charge, claiming, “This is becoming a Big Brother State.”

Operation Bloodline has been very successful at arresting individual gang members, but its priority is not to prevent gangs from being formed. Those arrested under the operation are commonly charged with conspiracy, which entails sentences ranging from ten years to a lifetime. Following these sentences, however, many are still vulnerable to recidivism — or habitual relapse into crime — upon being released from prison.  Indeed, many of the people convicted under Bloodline, such as Jesus Morales, are quite familiar with the inside of a prison cell.

“The primary reason people join gangs in any city, in any study, is protection,” explained Andrew Papachristos, a sociology professor at Yale University who conducts research on deviance and crime. The threat of being searched and hunted by police, Papachristos maintained, might actually incentivize individuals to turn to gangs for safety and physical security.

Finally, Operation Bloodline fails to address the environmental pressures to use drugs, as well as the financial incentives to sell drugs. A new study conducted by Carl Hart, a psychology professor at Columbia University, suggests that drugs cannot be blamed as the causal agent for deviant social behaviors like dropping out of high school. By conducting controlled experiments on rats, Hart discovered that the rats only consumed drugs when they were placed in high-stress environments, and that they stopped resorting to drugs when they were given options like having sweets or socializing with other rats. His research indicates that environmental factors actually play the biggest role in the decision to consume drugs.

Indeed, when an individual is confined to a poor neighborhood with few economic or academic opportunities, he may rationally turn to drugs for release and pleasure. Therefore, drug use is not a direct cause of socially deviant behavior, but rather a byproduct of living in particular environments that induce financial or social stresses. High rates of drug use can be interpreted as a manifestation of larger problems in the social environment.

They may also be partially explained by one common human vice: pride.

“People have a certain conception of themselves, and they don’t want to do a job that they think is beneath them,” explained Christopher Wildeman, a sociology professor at Yale who studies the effects of mass incarceration and inequality.

In a community with poor employment opportunities, adults are confronted with the choice of dealing drugs or working a job that provides no status or fulfillment.  Many people turn to drug dealing, or even criminal gangs, to improve their economic and social standing. Additionally, dealers in gangs are typically not addicts themselves, but are rather trying to supplement a minimum-wage job that cannot sustain their families.

New drug-tackling operations like Bloodline are shifting the focus to convicting distributors and traffickers. The operation has resulted in an astonishing number of arrests and convictions, but these numbers don’t necessarily translate into concrete improvements in New Haven’s community safety and well-being. Nevertheless, experts believe the shift from incarcerating addicts to gangs is still a step forward.

“Crimes of addiction are public health problems, not criminal justice problems,” Wildeman insisted. Law enforcement tactics that target only drug addicts are becoming recognized as futile and destructive to communities.

The legacy of the War on Drugs, however, lives on in programs like Bloodline. Its harsh, punitive measures carry the risk of perpetuating gangs and leaving individuals vulnerable to recidivism. Ultimately, drug-ridden neighborhoods may benefit from better law enforcement. But at the end of the day, change must start from smart policy prescriptions that address the social and economic factors that give rise to drug activity in the first place.