Pierre Bordieau, in his book “Photography: A middle-brow art”, praised that, “the analysis of the subjective or objective meaning that subjects confer on photography as a practice or as a cultural work appears as a privileged mean of apprehending, in their most authentic expression, the aesthetics and ethics of different groups or classes.”

Photography, as Bordieau puts it, can explain more than words. It is subordinated to social function as it captures different ideologies, values and ways of living.

Brandon Stanton, the creator of “Humans of New York,” captures this idea of a fusion between photography, morals and ethics through his work, which has grown to become an indicator of one of photography’s purposes in today’s society: “storytelling.”

On February 9th Brandon Stanton spoke in Battel Chappel as a Poynter Fellow in an event that was free and open to the public. Stanton, an acclaimed photographer and founder of Humans of New York, has amassed a worldwide audience as an author of three books, including #1 New York Times’ Best Seller Humans of New York. Stanton’s success got him a place in Time Magazine’s list of the 30 People Under 30 Changing the World in 2013. 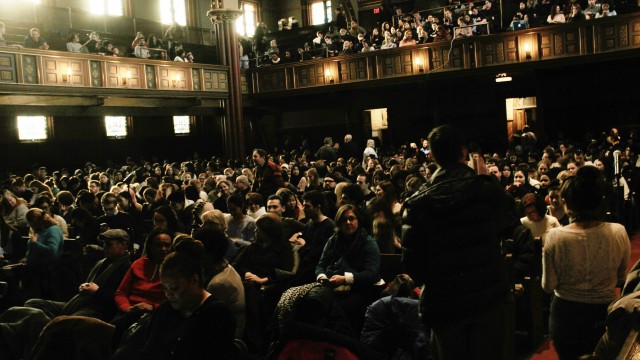 Brandon Stanton graduated with a major in History from University of Georgia in 2010. After his graduation, Stanton began to work as a bond trader at the Chicago Board of Trade, focusing all of his energy and time toward one objective: making as much money as possible.

“I was so obsessed about making money, I thought about nothing but money and trading,” he said. He worked as a bond trader for three years, but as time passed things began to not go as well and it suddenly became apparent that he was going to lose his job, the job he had spent so much time and energy on. “I was scared to death about losing my job,” said Stanton.

One day, his life took a sharp turn when one of his fears became true: he lost his job, and soon was completely broke.

“The day I lost my job was unexpectedly a good day because even though what I had been fearing and obsessing about had actually happened, suddenly there wasn’t anything to obsess about anymore. The energy I had put every day to retaining my job, was suddenly freed up. I began looking at all these other possibilities of what I could do with my life,” he shared.

Apparently life had bigger plans for Stanton, plans that, at that moment, he was not aware of. Stanton told the audience that he had been asked many times about a “momentous” time in his life before the creation of Humans of New York, and he recalls that losing his job was a significant moment in his life that led him to made one of the best decisions of his life.

“From now on, I am going to work just to make enough money to be able to do what I want and what I love with my time,” he said. “[I was] no longer using the concept of time as a way to get resources or money, nor a way to make straight As or engage in extracurricular activities … [I was] looking at time as a resource itself.”

What would Stanton do with this new perspective? What he enjoyed the most was photography, so while he was still working as bond trader he bought a camera as a way to relief his stress from work.

“I decided to go to downtown Chicago. I was just looking for beautiful things to shoot, maybe as a kind of metaphor; I do not know,” he told the audience.

A few months after losing his job Stanton decided to create a blog to upload some of his photographs. He showed the audience the first photo of people that he took: two young boys with their respective mothers on the subway. Neither the boys nor their mothers knew each other, but still both boys were looking at each other with a bright expression.

“This photo is very special to me because it reminds me [of] how scared I was about taking pictures of strangers. Even though I was scared, I wanted the pictures so badly. The photo, by the way, has zero likes and just one comment from a friend from college,” he added.

The fear that Stanton recalls having when photographing strangers made him realize that, even though he had no experience in the photography field, he could create a type of photograph that was unique.

The beginning of Humans of New York (HONY) can be traced to when Stanton decided to travel to New York City with the idea of stopping and photographing 10,000 people on the street. His blog started in 2010, but at that time, Humans of New York had nothing to do with what it is today. The central idea of Stanton’s work emerged when one day, he realized that the only photo he had for his blog appeared to have nothing special about it. It was a low quality photo of an old lady who was dressed entirely in green. But then Stanton remembered something she said.

“I was a different color every day. One day I decided to dress in green, and that day, was a very good day. Since then, I have been wearing the color green for almost fifteen years,” the woman had shared.

Even though the photograph had only 17 likes, Stanton recalls it as the most engaging photo he has ever posted. Stanton realized that this was his skill, his competitive advantage: he was good at stopping people, finding about their lives and, hopefully, making them feel good about themselves.

That was the moment when Humans of New York became what it is today. It is not just about photography, it is about telling the stories of random people, humanizing them and making them feel valuable members of society.

“There is something cathartic and easy-flowing about telling your story to someone who has no preconceptions of you,” Stanton said. “People really appreciate being able to share their stories.”

This is the way photography can use storytelling for social change. A lot of people do not have anything but their stories, so the feeling of validation that comes from somebody taking interest in what people have been through is an incredible way to promote inclusion, diversity and capture life of ordinary people in a beautiful way.

Today, Humans of New York has more than sixteen million likes on Facebook and around five million of followers on Instagram. Brandon Stanton’s work has transcended New York, reaching countries all over the world and taking part in activism programs organized by the United Nations and the United States’ White House.

Humans of New York has become an important social phenomenon. It helps us understand an important lesson: we are all humans, after all, and can empower each other when we listen and share what we have to say.