I was one of the many Americans who watched, mesmerized, as Charlie White and Meryl Davis skated their way to the United States’ first-ever Olympic Gold Medal in Ice Dancing. A lifelong Ann Arbor-ite, I had been following the pair’s career for years, and took personal pride in their breathtaking performance and well-deserved victory yesterday. While being woefully inept at ice skating myself, I have always had a distinct appreciation for the pure athleticism and discipline exuded by figure skaters and ice dancers (my mother had an extensive career as a competitive figure skater). When people unfamiliar to the sport see someone as skilled as White and Davis skate, they are witnessing artistic and athletic perfection – it looks flawless, effortless. It is this phenomenon, ironically, that is the sport’s downfall in regards to public perception – it masks how difficult what they’re doing actually is.

Like any other serious athlete, ice dancers spend hours training every day, both on and off the ice. They work on their strength, endurance, flexibility, and control. Ice dancing is not something you can pick up in a few years; it involves a lifetime of dedication to perfect a very particular skill set. White and Davis epitomize this dedication, skating as partners for seventeen years. To grasp just how difficult what they are doing is, consider just one of the moves they do in their free skate routine. At one point, they perform a lift in which White lifts Davis up to his shoulder and holds her there for several seconds while she is upside-down, perfectly vertical, in what I can best describe as a handstand position. Most people can’t do a handstand on solid ground, and yet there’s Davis, with only White’s shoulder supporting her, doing an immaculate handstand. Keep in mind that at the same time they are both whisking across the ice at frightening speeds. Yeah, I think I’ll try that one the next time I’m at open skate. 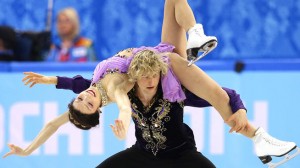 Perhaps I’m a bit biased after spending a lifetime competing in a sport that is similarly scoffed at whenever I employ that term, “sport,” to describe it. As a baton twirler, I know what it’s like for a sport to be dismissed or patronized. Nonetheless, I think it is high time we give these athletes the recognition they deserve. The Webster Dictionary defines a sport as “a contest or game in which people do certain physical activities according to a specific set of rules…” With that basic, objective description, ice dancing falls easily into the category of “a sport.” If you compare it to other popular Winter Olympic events, such as curling, it appears to be significantly more physically demanding. Even matched up against something that is indisputably a sport in public opinion, such as hockey, I promise you, ice dancing holds its own. Doing something so demanding, intricate, and dynamic for four minutes is indescribably difficult, and unlike most other popular sports, ice dancers have to look pretty while doing it. I can personally vouch for the fact that sports with an artistic performance aspect, like ice dancing, have an extra facet of difficulty most athletes have never even considered. Let’s face it, when was the last time a hockey player managed to flash the referee a winning smile while simultaneously taking a slapshot? Instead of mocking skaters for their sparkly costumes and cheesy grins, we should give them the athletic credit they deserve.