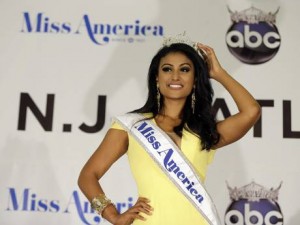 Do you know anything about Nina Davurluri aside from the fact that she’s the first Indian-American Miss America?

Regardless of how accomplished and amazing she is, the media’s somehow managed to completely bungle their reporting on her.  Almost every single news outlet is focusing all their attention on losers being comically racist (and uneducated) on social media.

Although the majority of Americans support Nina (she’s awesome!) and all that she’s accomplished, when we let the racists and bigots on Twitter be heard louder than Nina herself, we’ve already lost. It’s unfair and tragic to Nina that for some reason, the only thing people can focus on about her is her ethnicity, not who she is as a person. She wants to be a doctor! But no one knows that because everyone’s only focused on her ethnic heritage, both her haters and supporters in the process of defending.

She’s incredible, and the entire American community, not just Asian Americans or Indian Americans, should be celebrating someone who truly represents what being American is about. But if we let her success be tainted by a couple boorish slurs and insults, we let those boors define her, instead of letting her define herself.

So ignore the upset people on social media. Don’t feed them attention or press. They’re not representative of the average American nor are their bigoted viewpoints typical of American discourse. Don’t let them turn her from our Miss America into some sort of tragic hero that we pity, because her story is anything but tragic and she deserves our respect. Don’t let them take this moment of pride from all of us, as Americans. Because regardless of how outraged we may be by assorted racists on Twitter, they’re not worth it.

We have to rise above it, just like she can.

Austin Long is a staff writer for The Politic from Richmond, California. Contact him at austin.long@yale.edu. View more posts