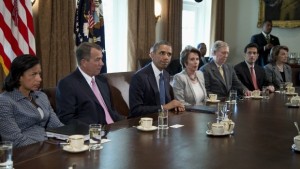 In the midst of the nation’s fixation on the government shutdown and the looming possibility of a default, the process of destroying Syria’s chemical weapons has quietly gotten off to a promising start. Although the Obama administration’s handling of the crisis was anything but ideal, the diplomatic resolution deserves recognition, and Congress could learn from it as the debt ceiling draws ever closer.

It is still too early to tell whether Syria will continue to cooperate with the UN, but the government’s compliance so far is reason for cautious optimism. Inspection teams have already arrived in Syria and began the first steps of dismantling the country’s chemical arsenal. A month ago, when word of the chemical attacks first broke out, no one predicted that a nonviolent course of action could be effective, yet instead of commending the diplomatic settlement, the media focused only on criticizing the White House for its apparent indecisiveness.

The Syrian conflict was an undeniable moment of weakness for the Obama administration; pushing for military action was a misguided strategy, but when Obama realized there was a better course of action, he humbled himself and took the alternative, and there is something to be said for that. Leaders need to know when to stand their ground and when to admit they are wrong and pursue a different strategy.

As Congress heads into the final days before the debt ceiling deadline, this lesson is more pertinent than ever, especially for Tea Party Republicans who refuse to abandon their self-destructive plan to defund Obamacare despite the nation’s overwhelming desire to reopen the government. Regardless of their ideology, it’s time for our political leaders to swallow their pride and pursue a different strategy; hopefully, they realize this before it’s too late.