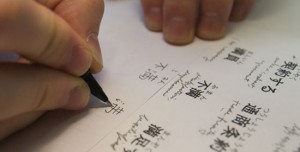 Since 1996, the Light Fellowship has given over 1,455 Yale students fully-funded opportunities to pursue language studies in China, Japan, and Korea. This was the dream of Dr. Richard U. Light ’24, who established the fellowship in the hope that language acquisition and cultural immersion in East Asia would provide students with fresh insights into their studies and enable them to become better leaders in government and society at large. The real-world experiences that Light Scholars encounter in Asia undoubtedly shape both their studies at Yale and inform their future career choices. Past Light Fellows include thirteen Fulbright Scholars, twelve Parker Huang Traveling Fellowship recipients, one Marshall Scholar, two Rhodes Scholars, and dozens of participants in Yale-China’s service internships.

Jamey Silveira JE’13, former president of the Light Fellowship Student Affairs Committee, acquired a deep fascination with China after spending all three of his summers at Yale studying at various programs in China under the auspices of the Light Fellowship. According to Silveira, the strength of the program lies in the way it opens the door to a first experience in Asia for so many Yalies.

“After my first Light Fellowship, the notion that I could reach a high level of proficiency in a short period of time didn’t seem so unreasonable,” he notes

Most Light-approved programs organize travel and social opportunities that better help students gauge the progress of their linguistic skills. By conducting a week-long social study of Tagou Martial Arts School in Henan Province as part of his studies at Harvard Beijing Academy, Silveira was able to have his first meaningful interaction with Chinese citizens other than his teachers. He discussed with the kung fu students their decision to leave home to study kung fu, their lives at school, and their goals and dreams for the future. Silveira didn’t need to ask any of his upper-level friends to translate, as all the hours he spent studying Chinese had paid off. Currently, Silveira plans on teaching English in southern Anhui Province until June 2015, through the Yale-China Association Teaching Fellowship.

Dana D’Amelio ES ’10 describes the Light Fellowship as a “three-month-long epiphany.” She studied Korean at Sogang University in Seoul during the summer of 2009, and then again from the fall of 2010 until June 2011. She later completed a Master’s in East Asian studies at Harvard University and is currently interning at the Office of the Korea Chair at the Center for Strategic and International Studies in Washington D.C.

D’Amelio and the other interns are responsible for compiling and disseminating Korea-related news stories to individuals, organizations, and social media sites that deal with Asian policy on a daily basis. D’Amelio is specifically tasked with following U.S.–South Korea relations and drafting weekly policy briefs for the chair. Drawing upon her experiences in South Korea as a Light Fellow, she observes, “Foreign policy is a product of myriad factors, many of which are grounded in cultural and societal norms.” Yet, to her dismay,  the policy community tends to over-analyze Kim Jong-un and his every move, instead of taking a more nuanced approach to crafting policy. D’amelio plans to pursue a lifelong career in Korean affairs and credits the Light Fellowship with shaping her goals and allowing her to pursue more career opportunities.

Getting involved in policy on the Hill isn’t the only way that Light alumni are influencing U.S. relations with Asia. Kevin Olusola MS’11, a member of the nationally-renown acappella group Pentatonix, was a special guest solo performer at the US-China Strategic & Economic Dialogue dinner on July 10, 2013. Dignitaries from both countries, including Joe Biden, Nancy Pelosi, and Henry Kissinger, as well as Chinese Vice Premier Wang Yang, were in attendance. Introducing himself and his group in both Chinese and English deeply moved the audience and functioned as an important gesture of cross-cultural understanding. According to an interview from Beliefnet.com, Olusola attributes the origins of his success to his 2008 summer in Beijing, where he spent his free time practicing the unique beat boxing and cello-playing combination that eventually led him to Pentatonix.

The Light Fellowship encourages Yalies across all disciplines to apply for the award. Students are then free to do what they want with their Light experience, whether that means pursuing further engagement with Asia or using their experience as a reference point to their future endeavors. As Asia becomes increasingly important in terms of economic development and strategic value, as evidenced by the Obama administration’s recent “Pivot to Asia,” a student’s legitimacy in any field could benefit from spending time in East Asia.

Cole Florey BK ’14 planned on using his recent summer experience in Tokyo to inform his senior thesis in Environmental Science by studying firsthand the relationship between Buddhism and Japanese attitudes towards the environment, but he also ended up finding a second home. Prior to his summer in Japan, Florey, who hails from Coeur d’Alene, Idaho, had never lived in a foreign country for an extended period. He was pleasantly surprised by Tokyo’s rich assortment of destinations — which included temples, hidden shrines, cat cafés, and a Jazz bar run by Buddhist monks called “Vowz” — and gained the confidence to feel at home in another part of the world. Florey is currently applying to graduate schools in Japan and hopes to move there after graduating from Yale.

The fact that the Light Fellowship covers all the expenses of studying abroad for over 100 Yalies every year seems like nothing short of a miracle, yet many students agree that there could be room for improvement. According to Robert Clough, current director of the Light Fellowship, the office would like to find better ways to connect returning Light Scholars with courses and faculty at Yale that might be able to help those students think more critically about their experiences in East Asia.

Many students interviewed about their time abroad mentioned difficulties with obtaining proper visas, which required them to wait for a new visa and resulted in unexpected fees. Many also wish that they could have received more guidance from the Fellowship office.

According to Natalee Pei BK ‘13, a two-time Light Fellowship recipient, there has also been a marked change in the way that the Light Fellowship has been run since her first experience in China. In the past year, the office has been less responsive, she and other fellows said. Emails she has sent have never received a response, an issue that other fellows also experienced this year. She cited the strengths of the way Kelly McLaughlin, currently the Director of Fellowship Programs at Yale’s Center for International and Professional Experience, used to run the Light Fellowship program.

“He really put his heart and soul into it,” she said, referring to the way he used to comment on Light Fellow’s blogs and encourage them reflect deeply upon their experience abroad. With a fellowship as comprehensive as the Light, it seems that the Light Fellowship office could use a bigger staff to handle logistical issues and make it more responsive to the needs of current fellows.

Now that the Light Fellowship has accumulated over a decade of alumni, there have been attempts to build a more active alumni network. D’Amelio has recommended that the Light Fellowship host annual panels at which Light Fellow alumni speak to prospective fellows about the professional and academic opportunities afforded by learning Chinese, Japanese, and Korean. This could give current Yalies more ideas as to how their language studies could fit into their potential career interests, as well as how to explore these possibilities during their free time while they are abroad.

I spent the past summer, and am spending this fall, studying Chinese in Beijing under the Light Fellowship. Because of my proximity and tour with my a cappella group, the Yale Spizzwinks(?), I also had the chance to travel to other places in Asia, including Hong Kong, Thailand, Myanmar, Japan and Singapore. Seeing these countries has helped me recognize the distinctions among the myriad cultures that make up East and Southeast Asia.

I’ve gathered numerous anecdotes during my time in Asia that have enriched my perspective of the world, and that I would have never have heard in the United States.

This summer, I spoke with a group of high school students from China’s Inner Mongolia Province who told me that it was common knowledge that critically analyzing Chairman Mao on their college entrance exam would automatically result in a zero, no questions asked. In my last month in China, every day, I would watch from my classroom window as all the first-year students at my college participated in mandatory military training (junxun), a requirement for all college freshman across the country. Deng Xiaoping initiated this policy after the 1989 Tiananmen Square revolts, and it has continued ever since. I talked to two young girls dressed in military suits in the cafeteria one morning. They had never heard of the Tiananmen massacre of 1989 and seemed incredulous when I proposed that junxun and Tiananmen shared a connection.

As a Chinese language student in Beijing this fall, I am still in the midst of my Light experience. However, I have already gained a much deeper understanding of the way Chinese culture is developing, and how the government is influencing that trajectory. I have come to realize how Chinese citizens are unable to influence the way their country is run and therefore see political activism as a lost cause. It seems that many are content with any form of government, as long as the economy is growing and their standards of living are improving. I am constantly considering the effects of this rapid development on the future generations of Chinese citizens.

These past few months have triggered endless epiphanies about my Yale career, Asia’s place in the world, and where America stands in comparison. The Light Fellowship is shaping my character and giving me a chance to reflect upon, consider, and reaffirm the values I stand for. The fellowship may hand us a plane ticket to Asia, but in the end, we have no way of knowing where it will take us.

For more information about the Light Fellowship check out: http://www.yale.edu/iefp/light/index.html

For more information on the author’s time in China, see his blog at: http://philkinson.wordpress.com/