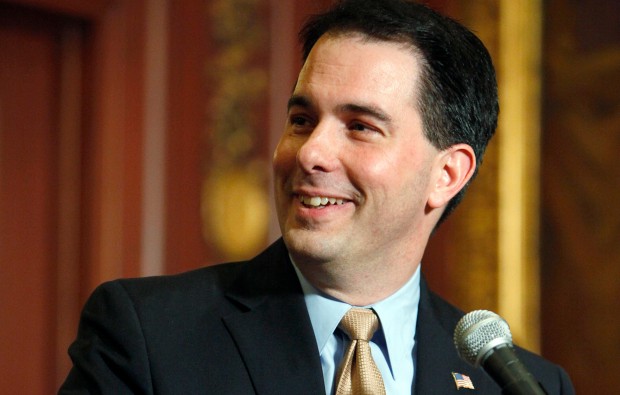 As diligent readers of my blog posts (Hi, Mom!) will remember, several weeks ago I wrote that anyone that claims to know who the GOP will nominate for President in 2016 is either seriously misguided or lying.  That doesn’t mean, however, that playing the guessing game still isn’t fun!  And although I maintain that it is impossible to predict with any certainly whom Republicans will pick, I assert that today’s most likely candidate is Wisconsin Governor Scott Walker.

A 46-year-old former Eagle Scout, Walker has already had a long career in Wisconsin politics.  Since winning a special election to fill a state assembly seat in 1993, Walker has continuously held elected office, working as the Milwaukee County Executive from 2002 to 2010, and Governor since then.  He is polarizing, austere and has a knack for generating headlines.  He may also be the GOP’s most likely pick for President in 2016.  Below are ten reasons why.

1.  Walker has made a name for himself by defeating Democrats in blue and purple territory.  Like, a lot of Democrats.  Although the assembly district he represented was largely conservative, he had to beat the Democrat Chris Ament, son of then-Milwaukee County Executive Tom Ament, to get there.  After the latter Ament resigned amid scandal, Walker was elected with 57% of the vote to the Executive’s post in a county that had voted Democratic in every presidential election since 1960.  He was reelected with 59% of the vote.  And despite Wisconsin’s decidedly bluish hue — it voted for Barack Obama in both 2008 and 2012 — Walker was not only elected Governor in 2010, but survived a high-profile recall election two years later.  (He will face another statewide contest in 2014, but the recall ironically strengthened his approval ratings and electoral footing in the state.  Incumbent Wisconsin governors have also been reelected more than 70 percent of the time.)  From his county-level wins to his gubernatorial and recall victories, Walker has shown that despite intense scrutiny and political efforts to the contrary, he can perform well in Democratic territory.

2.  Walker has governed both conservatively and effectively.  Thanks in no small part to a GOP-controlled state senate and assembly, Walker has advanced a staunchly right-wing legislative agenda.  From a bill requiring ultrasounds before abortions, to a rejection of federal money to expand Medicaid, to a revamped school voucher program, to a restrictive voter ID law, to hundreds of millions of dollars in tax cuts, Walker has repeatedly delivered on conservative campaign promises.  Most famously (or infamously, depending on your political persuasion), Walker also pushed through a bill that curtailed the collective bargaining rights of public sector unions.  During the subsequent protests — and recall attempt — Walker solidified his conservative bona fides and was dubbed the “rock star of the right.”

3.  He’s not a creature of Washington.  If Senators Marco Rubio, Rand Paul or Ted Cruz or fellow Wisconsinite Rep. Paul Ryan decide to run for President, they will have to contend with the stench of Washington, D.C.  Walker, on the other hand, has never served in the capital and cannot be affixed with the “Washington insider” label.  Moreover, he has not been forced to take positions on the divisive issues Congress has dealt with over the last several years.  On healthcare, for instance, Walker has repeatedly called for a full repeal of the Affordable Care Act, but he did not have to vote on whether to shut the government down over the issue.  “I’m not involved at the federal level,” he told reporters earlier this year regarding healthcare, “so I’ll let them work that out for right now.”  On the bailout and immigration and NSA and the debt ceiling, he has also been able to weigh in on his own terms from the relative safety of the Madison statehouse.

4.  He’s both establishment and Tea Party.  In many ways, Walker has found the GOP sweet spot.  Right of Chris Christie, left of Cruz and Paul, Walker has situated himself in a place palatable to both factions of the Republican Party.  His agenda has been uncompromisingly conservative, but he does not hold forth with the same vitriol of Tea Party hardliners like Cruz.  Walker won the support of the grassroots during the 2011 standoff against organized labor and the 2012 recall effort, for which Republican activists nationwide cut checks and made phone calls on his behalf.  Yet he has also ingratiated himself to the establishment wing of the party by appearing at fundraisers and campaign events for fellows Republicans across the country.

5.  He straddles the other GOP divide too.  Before the Tea Party-Establishment chasm in the Republican Party, it was social conservatives versus fiscal conservatives.  And despite the rise of the Tea Party, this tension never really went away. Walker, however, the Evangelical son of a Baptist minister, has managed to win plaudits from both camps.  He is pro-life even in the case of rape or incest and has repeatedly opposed same-sex marriage and civil union attempts on the state level.  (As I said before, he also passed one of the most restrictive abortion bills in the country.)  But at the same time, he has lowered taxes and cut spending across the board.  The Mike Huckabees and the Ron Pauls of the GOP often cooperate only out of political necessity, but both sides have expressed support for Walker. 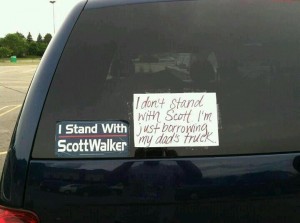 6.  He can raise money and make headlines.  In the run-up to his 2012 recall, Walker raised more than $31 million, a record sum in Wisconsin, from an unheard-of number of contributors.  His Rolodex of large donors is similarly extensive, and growing as he continues to rally and raise money for other Republicans.  (For instance, on November 2, he spent his 46th birthday stumping for Virginia gubernatorial candidate Ken Cuccinelli.)  Walker also has a habit of attracting media coverage on both the local and national levels.  From high-profile fights with labor unions and assembly Democrats, to appearances at the RNC and CPAC, Walker has demonstrated an ability to land himself on A1 that will be invaluable to any national aspirations.

7.  He’s sitting right above Iowa.  For any budding presidential candidates out there, here’s some advice that is sure to pay off in spades: be born in Iowa or New Hampshire, the first two states to vote.  The next best thing, however, is to hail from close enough to assert home field advantage.  Wisconsin, which borders Iowa to the north, will be a definite boon to Walker’s presidential ambitions.  He is culturally (and semantically) similar to Iowans; staking out a claim as the son of the Midwest will give him a significant leg up in arguably the most crucial state in the primary process.  Looking forward to the general election, it’s also worth remembering that had Mitt Romney managed to carry Iowa, Minnesota, Ohio, Pennsylvania and Wisconsin, he would be President right now.  If the wise men of the GOP decide their best bet for the White House is to focus on the relatively white and frugal Midwest, Walker may soon look all the more appealing.

8.  At 46, he’s a fresh face in a party that is desperately looking for new leadership.  In 2012, every single GOP presidential candidate — from Mitt Romney to Newt Gingrich, Jon Huntsman to Michele Bachmann — was older than the incumbent Obama.  Walker, however, was born in 1967 and has two high school-age sons (who apparently need unlimited texting plans).  He’s a plainspoken college dropout who proudly drives a Harley-Davidson motorcycle.  What’s more, his rise to prominence coincides with a serious dearth of national Republican leadership.  In other words, he has an ideal opportunity to take a leading role reshaping the Republican Party.  Walker may not represent Camelot, but he is a far cry from the parade of senior citizens many American picture when they hear “Grand Old Party.”

9.  He’s run a smart sleeper campaign so far.  Three years out from a Presidential election, it is never helpful to look like you are running for President.  Especially in an age when confidence in elected officials is at an all-time low, this quality can repel voters.  But at the same time, it is important to be laying the groundwork for a run.  And Walker has been doing just that.  Just as he’s been studiously passing conservative legislation in Wisconsin, he’s attracted support and potential surrogates thanks to speeches, fundraisers and rallies across the country.  He routinely visits early primary states and occasionally does the Sunday morning show circuit.  He will soon publish a book titled, “Unintimidated: A Governor’s Story and a Nation’s Challenge,” which he wrote with former President George W. Bush’s speechwriter Marc Thiessen.  Yet he’s not slow-jamming the news with Jimmy Fallon.  He’s not shutting down the federal government for a couple of weeks.  And he’s not already picking fights with potential primary opponents.  Crafting a presidential campaign years out from an actual bid is among the trickiest of politics’ high-wire acts, but Walker has maintained his balance so far.

10.  He may be the “lessest” of the GOP evils.  Aside from the candidates of Aaron Sorkin political dramas, every potential nominee has positions that will prove unacceptable to primary voters.  Walker’s, however, may be the least bad of the bunch.  Whereas Chris Christie may be moderate on gay rights and gun control and Rubio irked many with his leadership on immigration reform, Walker has rock-solid conservative credentials.  Whereas Cruz and Paul may be too far right on many libertarian pet issues, Walker is more in line with the GOP’s hawkish base.  Whereas Ryan and Jeb Bush seem unenthused about seeking the presidency, Walker is widely believed to covet a White House run.  And whereas wonks like Louisiana Gov. Bobby Jindal struggle to keep a crowd engaged, Walker excels at offering up red meat speeches to supporters.  This says nothing about his ability to win over general election voters, but that is a decidedly secondary concern for Republican presidential candidates.  Their first job is to make it past the mayhem that is the modern primary process.  Walker, at least today, looks to be the best positioned to do just that.

This prediction, of course, will likely prove to be wildly off base long before the first evangelical Iowan enters a spruced-up high school gymnasium on caucus day.  Walker is far from a shoo-in for even his 2014 gubernatorial reelection.  His fiscal record is shoddy at best; he has basically zero foreign policy expertise, and could easily appear in the dictionary next to “career politician.”  He also hasn’t endured anywhere near the level of national scrutiny that, say, Rubio or Christie or Cruz has.

Most importantly, the political world can shift dramatically in the time between now and the next presidential election.  Just two years before announcing his bid for the White House, after all, Barack Obama was a state senator from Illinois’ 13th District.

But that doesn’t mean it’s not still fun to guess, intuit, and use the hints, rumors and hearsay of 2013 to begin to construct a narrative for 2016.