The election is upon us. And we’ve decided not to pull any punches, so we’ve abolished the Toss-Up category. But be warned: we see this year’s gubernatorial elections as quite chaotic and have no fewer than 13 races in the “Leans” category. We won’t get them all right, but read anyway!

Gov. Sean Parnell has not circled the wagons in his base since Republican-turned-Independent Bill Walker and Democrat Byron Mallott formed a fusion ticket in August. To the contrary, ex-Gov. Sarah Palin recently endorsed Mr. Walker after a split with Mr. Parnell over a controversial tax cut for oil companies. We have to call Mr. Parnell an underdog; the vaunted turnout operation of Sen. Mark Begich (D) may also give a bounce to Mr. Walker, though it probably won’t be enough to save Mr. Begich himself.

Like its counterpart Senate race, Arkansas’s gubernatorial race has shifted inexorably toward the Republican, Asa Hutchinson, and away from Democratic ex-Rep. Mike Ross. We’ve said before that if Mr. Ross loses this race, it was unwinnable for Team Blue; with an eight-point lead for Mr. Hutchinson, we’re pretty confident that’s the case.

We’ve been largely bereft of polling in Arizona’s gubernatorial race, but the lack of activity from national Democrats indicates that they have little hope for Fred DuVal’s race against Republican Doug Ducey. Democrats might have a better shot at attacking Arizona’s Senate seat in 2016, a presidential year, especially if Sen. John McCain retires or loses a primary.

This campaign was a much rougher ride for Democratic Gov. John Hickenlooper than many expected, and we’re figuring a stressful election night here. Polls are neck-and-neck, but we have to give Democrats the edge in a coin-flip in Colorado, given the substantial polling bias against them in the past few elections. Mr. Hickenlooper should run a couple points ahead of Sen. Mark Udall, and we’re calling a split decision here.

In both Connecticut and Illinois, the story has been the same: a Democratic incumbent, with underwater approval numbers and having alienated key constituencies, threw the kitchen sink at a Republican private equity mogul enough to pull slightly ahead in a deep blue state. We think it will be enough in both, but find it remarkable that, given where we were over the summer, that the blue state most likely to fall into Republican hands isn’t Connecticut, Illinois, or Hawaii, but instead Massachusetts. There, the story is the Republican candidate, health care executive Charlie Baker, who has a remarkable 54/28 favorable spread and is now favored to defeat Democrat Martha Coakley.

Just when you thought that pettiness couldn’t go any further, this. In a race populated by unpopular Gov. Rick Scott (R) and unpopular ex-Gov. Charlie Crist (R-then-D) and over $100m of campaign spending, Floridians will probably just be happy to have it over. But early voting numbers look good for Democratic turnout, and we think Mr. Crist will probably prevail.

In Minnesota, just like with Sen. Al Franken, the challenge to Gov. Mark Dayton simply never emerged: unlike 2008, there will be no drama in Minnesota this year. In Idaho and Oklahoma, among the reddest states in the country, there were surprisingly strong challenges to Govs. Butch Otter and Mary Fallin, but we expect both to fall short—though both will probably win by less than one would have expected a year ago.

In the gubernatorial elections with the most national importance—and the future of the types of collective bargaining restrictions that Govs. Rick Snyder (R-MI) and Scott Walker (R-WI) signed—we now see a narrow edge for Mr. Walker and a somewhat larger one for Mr. Snyder. On a night that will probably be bleak for Democrats, the trophy of Mr. Walker’s head—and any presidential ambitions he might have had—would be a decent consolation prize as well, if Democrat Mary Burke can pull an upset.

Gubernatorial races in New Hampshire and Rhode Island have both tightened, leaving Vermont’s as the only uncompetitive one in New England. We would be quite surprised if New Hampshire Gov. Maggie Hassan lost—if she does, expect major losses for House and Senate Democrats because it likely means that Scott Brown defeated Sen. Jeanne Shaheen by a significant margin, foreboding a Republican wave. A loss in Rhode Island would be more understandable, with an open seat, scarce polling (though it all shows Democrat Gina Raimondo ahead, mostly by narrow margins) and the nation’s most elastic electorate. 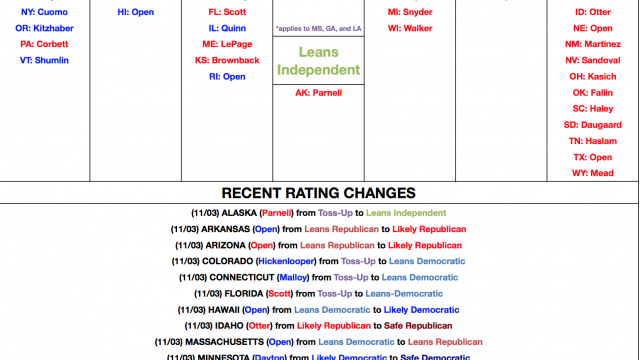