We have significantly less movement here than in our gubernatorial races: these ratings are fundamentally the same as those from last week, only without the Toss-Up category and the inclusion of the Leans Runoff category.

In Georgia, the wave of polling that saw Democrat Michelle Nunn briefly top Republican David Perdue last week has receded, and she has returned to a slim deficit in the polls. Without Libertarian Amanda Swafford garnering around 3% of the vote, we would give Mr. Perdue the edge: now that he must beat Ms. Nunn by that margin, we think a runoff in January is the most likely outcome. In Louisiana’s “jungle primary”—five Democrats, three Republicans, and a Libertarian are on the ballot—no one will get the requisite majority. Rep. Bill Cassidy (R) has led Sen. Mary Landrieu (D) in head-to-head polls, but 10-15% of the vote will likely be garnered by Tea Partier Rob Maness, preventing a Cassidy win. And it would be a shocker if Ms. Landrieu gets particularly close to a majority given the ballot clutter. Georgians and Louisianans should hunker down if the Senate ends up hanging in the balance.

By the narrowest of margins, we’re casting our lot with Independent Greg Orman in Kansas. After Mr. Orman surged into a big lead when Democrat Chad Taylor dropped out of the race, national Republicans fought back on behalf of Sen. Pat Roberts, pushing the race into a dead heat. We recommend, however, that you make your pick in Kansas by means of a coin flip.

These three states are the ones the Democrats need, and probably won’t get. We would guess that they probably win one, but that would require running the post-election gauntlet of winning Georgia (or Louisiana) and persuading Greg Orman to caucus with them if he defeats Pat Roberts. Republicans lead the polling average in each by 2.4pt, 2.5pt, and 2.3pt, respectively. Polling in Alaska is notoriously unreliable—and two local pollsters have given Mr. Begich a substantial lead—so it could be a place to watch. But given that Mr. Begich didn’t even lead election returns until nine days after the election in 2008, so don’t count on a result this week. In Colorado, Mark Udall hopes that he can replicate Sen. Michael Bennet’s victory in 2010—Mr. Bennet trailed his opponent by 3pt in the polling average before prevailing by 1.7pt. But both are underdogs, as is Rep. Bruce Braley (D) in Iowa. 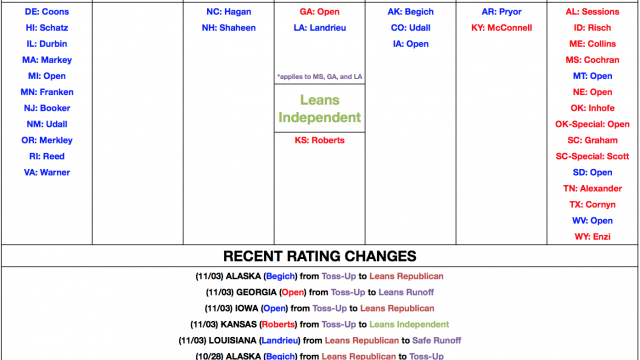