This week, we’re tackling the long-shot opportunities in this year’s thirty-six gubernatorial elections, from least to most competitive.

Four years ago, Tom Corbett was comfortably elected to the Pennsylvania statehouse by a 9% margin. The honeymoon, however, was fleeting. Pilloried for everything from education to the environment to general incompetence, Mr. Corbett soon gained the dubious distinction of America’s least popular governor with underwater approvals in every area of governance. His opponent, Democratic businessman Tom Wolf, has led Mr. Corbett by double digits all year and should coast to the easiest gubernatorial takeover in the country.

Nebraska and Oklahoma are, like their fellow Plains states, staunchly Republican at the federal level. Neither has voted for a Democrat in a presidential election since Lyndon B. Johnson. But it was only recently that Republicans have dominated at the state level. And while neither has seen the fireworks that their Kansan neighbors have in this election cycle, both face closer-than-expected gubernatorial elections. In Nebraska’s open-seat election, wealthy businessman Pete Ricketts (R) is squaring off against former University of Nebraska Board of Regents chair Chuck Hassebrook (D). In Oklahoma, Governor Mary Fallin (R) faces a credible challenge from State Rep. Joe Dorman. While both Mr. Hassebrook and Mr. Dorman face considerable headwinds in their state, the little polling that we have indicates that these races are potentially competitive, with both Mr. Ricketts and Ms. Fallin below fifty percent.

Mark Dayton successfully swam against the Republican tide in 2010 to win the Minnesota gubernatorial election by just 0.4%—though it was a landslide compared to Al Franken’s 312-vote margin two years earlier. In the perennially competitive Ohio, ex-Rep. John Kasich narrowly ousted Democratic Gov. Ted Strickland. But the challenges to both Midwestern governors are taking a back seat to the fierce campaigns against Govs. Scott Walker (R-WI), Mark Snyder (R-MI), and Pat Quinn (D-IL). Mr. Dayton has consistently held a lead in the high single digits against his unheralded opponent, Jeff Johnson (R), in a fairly tame race. And while many Democrats thought Mr. Kasich vulnerable after his anti-union proposals were rejected by voters, he remains fairly popular and his Democratic challenger, Cuyahoga County Executive Ed FitzGerald, has been a disappointment. We expect both governors to win reelection, but we are not quite ready to declare them Safe.

In 2010, the special election to fill the seat of the late Sen. Edward Kennedy (D-MA) was the opening salvo in the Obamacare wars. While the victory of State Sen. Scott Brown—the first since for a Republican since 1972—was partially attributed to the controversial health care reform, the lackluster, gaffe-ridden campaign of State Attorney General Martha Coakley (D) was a critical factor in the loss of the seat, and with it, the Democrats’ filibuster-proof majority in the Senate. Now, Ms. Coakley is seeking redemption in the race to replace two-term Governor Deval Patrick (D), where she is the favorite to receive the Democratic nomination on September 9. While Massachusetts’s blue tint favors Ms. Coakley, polls indicate that she may have a race on her hands against Republican Charlie Baker.

In a highly unusual move, negotiations between the two challengers to Alaska Gov. Sean Parnell (R), Democrat Byron Mallett and Republican-turned-Independent Bill Walker have formed a fusion ticket against Mr. Parnell. Mr. Walker will run for governor, while Mr. Mallett will be his running mate for the lieutenant governor position. While Mr. Parnell, who became governor when Sarah Palin resigned the post in 2009, won a full term easily in 2010 after defeating Mr. Walker in the Republican primary, he has never been particularly popular in Alaska. Sporting a mediocre 42%/42% approval spread in an August poll, he still easily led Mr. Mallett and Mr. Walker in a three-way race. But with the opposition to Mr. Parnell consolidated into one ticket behind the moderate Mr. Walker, internal polling shows a tight race. Until we get some new polling in the two-way race, we are shifting our rating to only LIKELY REPUBLICAN due to Alaska’s red hue. If public polling backs up Mr. Walker’s internal polling, however, this race could shift further toward “leaning” or even “toss-up” territory. 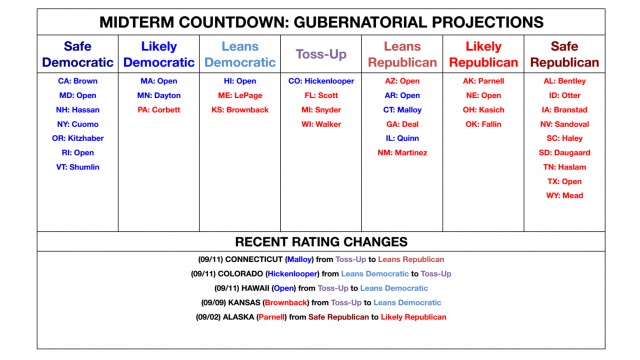