In the disastrous midterms of 2010, a bright spot for Democrats was Colorado. A state that only twice backed a Democrat for president in the fifty years before Barack Obama carried the state in 2008, Colorado surprised many observers by reelecting appointed Sen. Michael Bennet (D) and electing Denver Mayor John Hickenlooper (D) governor by a comfortable margin. Four years later, however, Colorado’s membership in the new Democratic coalition is being challenged: Sen. Mark Udall is getting a stiff challenge from Rep. Cory Gardner while Mr. Hickenlooper is facing down ex-Rep. Bob Beauprez in a narrow contest. Facing blowback over gun control legislation and an about-face on the death penalty, the affable Mr. Hickenlooper is facing a blowback from the old Colorado. Polls show the barest of leads for Mr. Hickenlooper, though an early September poll from Quinnipiac that gave Mr. Beauprez a ten-point lead has not been backed up by any other pollsters. We give this race a rating of Toss-Up, but Mr. Hickenlooper’s position seems less precarious than it did a month ago.

The most expensive governor’s race in the country, the Florida governor’s race is anything but cordial. Incumbent Gov. Rick Scott, a former health care executive and venture capitalist who sank $75m of his own money into his 2010 campaign, is facing ex-Gov. Charlie Crist, who was elected as a Republican in 2006 but left the party in his unsuccessful Senate bid against Marco Rubio in 2010 and has since joined the Democrats. A campaign more focused on personal attacks than policy, the race has focused on Mr. Scott’s past business dealings, connections of both candidates to Ponzi schemer Scott Rothstein, and various campaign gaffes. The race has been neck-and-neck for months, while the popularity of both candidates has been dragged south of 40%. We rate Florida as a Toss-Up as well, and advise our friends in Florida to hunker down for the next few weeks of the air war.

Illinois Gov. Pat Quinn ascended to the office after his predecessor, Rod Blagojevich, was impeached and convicted on corruption charges that included the attempted sale of the Senate seat vacated by Barack Obama on his ascension to the presidency. Since then, he has never managed to win much popularity, winning election to a full term by less than a percentage point in 2010 and weighed down by Illinois’s chronic deficit woes, a controversial effort to address pension reform that angered unions while being slammed as insufficient by fiscal hawks, a corrupt anti-violence program, and an unpopular tax hike. This summer, Mr. Quinn seemed an underdog against his Republican opponent, well-funded private equity investor Bruce Rauner, who led by as much as double digits. But a ruthlessly negative campaign by Mr. Quinn against Mr. Rauner’s previous business dealings has helped tighten the gap, and now holds a narrow lead. Despite his unpopularity, Illinois may just be too Democratic for Mr. Rauner to pull off a victory: we are moving this race to Leans Democratic.

When Republican Gov. Rick Snyder signed right-to-work legislation in late 2012, he set up a gubernatorial battle second only to Scott Walker’s reelection in neighboring Wisconsin in its implications for the future of America’s unions. Mr. Snyder and his “one tough nerd” persona swept into office in a landslide in 2010 amid the near-collapse of Michigan’s crucial automotive industry and a slow recovery from unemployment exceeding 14% in the depths of the recession. While he has sought to portray himself as a nonpartisan pragmatist, state Democrats have argued that his agenda—including education cuts, pension taxes, and further legislation to curtail unions—is just as conservative as the more confrontational Mr. Walker’s, while Mr. Snyder has also garnered significant criticism from his right. And his challenger, ex-Rep. Mark Schauer, has pointedly criticized Mr. Snyder’s corporate tax cuts alongside higher taxes for pensioners. Mr. Schauer managed to take advantage of Mr. Snyder’s lukewarm approvals to pull even in early September, but Mr. Snyder has proved resilient and opened up a small single-digit lead. Especially since Democrat Gary Peters is maintaining a steady lead of his own in the state’s Senate race in the same polls, we think Mr. Snyder has a real edge: Leans Republican.

Long billed as the marquee race of 2014, Wisconsin hasn’t fallen short. It is currently the nation’s closest gubernatorial race (according to the RealClearPolitics polling average), with nary a point separating Gov. Scott Walker and his Democratic challenger, Mary Burke. Though it has lacked some of the spark of the attempted recall of Mr. Walker in 2012, which he survived by a seven-point margin, the race is also largely a referendum on Mr. Walker’s boldly conservative agenda of tax and budget cuts and largely successful effort to crush public sector unions. But without the bloc of voters turned off by Democrats’ use of the recall, normally reserved for issues of malfeasance rather than ideology, Mr. Walker is fighting for his political life. Ms. Burke has touted her experience as an executive with Trek Bicycle and blamed Mr. Walker for a budget shortfall, while the governor has also been dogged by a persistent scandal involving campaign contributions. And the implications of this race stretch beyond Wisconsin: a defeat for the incumbent would be a significant victory for national unions and Mr. Walker has been touted as a potential presidential candidate in 2016 if he wins. But there is a solid chance that, like recent presidential aspirants Sen. George Allen (R-VA) in 2006 and Gov. Roy Barnes (D-GA) in 2002, his White House bid could be felled by a failed reelection before it even begins. We rate this race as a Toss-Up. 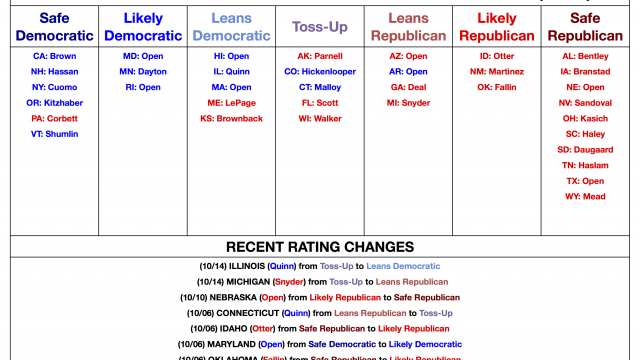