With under ten weeks until 36 U.S Senators, 435 U.S. Representatives, and 36 governors face the polls, we at The Politic Blog are beginning our countdown. Every week until November 4, we will be profiling the races that will tip the balance of power in Congress and the states for the final two years of the Obama presidency. We begin today with the Senate Moonshots: the races we’re not quite ready to write off.

“What’s the matter with Kansas?” wrote William Allen White in 1896, blaming Populist leaders for economic stagnation in an otherwise booming Midwest. The question is once again salient, as Gov. Sam Brownback’s aggressive package of tax and budget cuts has sharply divided Republicans. Democrats—with a healthy helping of moderate Republicans, including over 100 former Republican office-holders who have endorsed Mr. Brownback’s opponent, Paul Davis—blame the budget reform for cutting education and infrastructure spending and lowering the state’s credit rating. But while Mr. Brownback is certainly in dire straits—trailing Mr. Davis by up to ten points in polls—Sen. Pat Roberts (R) has problems of his own. While a Democrat hasn’t won a Senate seat in Kansas since 1932, Mr. Roberts barely eked out a primary win over deeply flawed opposition, and faces attacks over his residency—he no longer lives in the state, and stays with donors when he campaigns at home. With independent businessman Greg Orman drawing 20% of the vote in a recent poll, Mr. Roberts’ lead over Democrat Chad Taylor is stuck in the mid-single digits. While his defeat in a general election would have seemed unthinkable a few months ago, a convincing win by Mr. Davis could just maybe bring Mr. Taylor (or even Mr. Orman) across the finish line.

The 2008 Minnesota Senate election was so contentious that its winner, former Saturday Night Live performer Al Franken (D), was not declared until nearly eight months after Election Day—by a mere 312 votes out of nearly three million cast. Polls have been showing Mr. Franken up by a significant margin—roughly eight or nine percentage points—but his campaign with businessman Mike McFadden has been slower to start than most. And while President Obama carried Minnesota by eight points in his reelection bid, his approval rating in the state has fallen to below forty percent in a recent SurveyUSA poll—below his national average. While Mr. Franken is certainly in a strong position to win reelection, he looks more vulnerable than other incumbents in single-digit Obama states like Tom Udall (D-NM), Mark Warner (D-VA), and Jeff Merkley (D-OR).

When Senate veteran Max Baucus (D-MT) announced his plans to retire, Democrats hoped to shore up their chances in the red state by appointing Lt. Gov. John Walsh to the seat to run as an incumbent (Mr. Baucus accepted an appointment as ambassador to China). While Mr. Walsh seemed capable of running a viable campaign against Rep. Steve Daines, his campaign ran aground in July when a New York Times exposé revealed that he had plagiarized during his time at the Army War College. After a brief period of defiance, Mr. Walsh abandoned his run in early August, leaving inexperienced State Rep. Amanda Curtis to challenge Mr. Daines. We don’t see much of a chance for Ms. Curtis, but we’ll wait a few weeks before placing it with the other seats Republicans will seize from retiring Democratic incumbents—West Virginia and South Dakota.

After the retirements of Democratic Sens. Max Baucus (MT), Jay Rockefeller (WV), and Tim Johnson (SD), Montana seemed the most likely to remain blue. But after the debacle (above) with Mr. Baucus’s appointed replacement, John Walsh, it is now unreasonable to expect State Rep. Amanda Curtis, to overcome her twenty-point deficit against Rep. Steve Daines. We move the race to Safe Republican. But there is new life in the South Dakota race, largely written off after Republican ex-Gov. Mike Rounds entered the race and two leading Democrats, ex-Rep. Stephanie Herseth Sandlin and Mr. Johnson’s son, Brendan, declined to run. While Mr. Rounds remains a strong favorite to win, a surprisingly strong campaign from Democrat Rick Weiland and an independent bid by ex-Sen. Larry Pressler, a former Republican, has introduced uncertainty to the race. Limited polling (largely internal surveys that should be taken with a grain of salt) have given Mr. Rounds less than stellar favorability ratings and shown him struggling to reach 40%. And as we’ve seen in Alaska and Kansas, races with strong independents can change very quickly. As a result, SD-Sen is now rated Likely Republican, and is the only race in that category 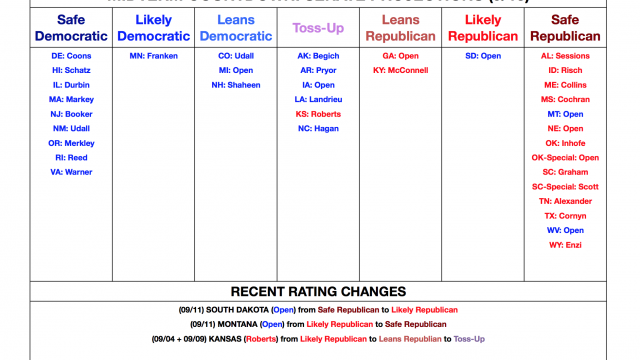